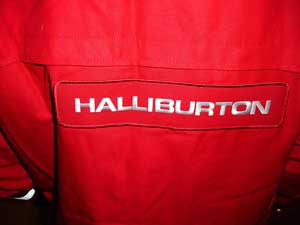 Remember Jamie Leigh Jones, the Halliburton/KBR contractor who alleged she was gang raped by her co-workers in Iraq and then imprisoned in a shipping container after she reported the attack to the company? Well, it looks like she’s finally get to sue the company, in a real courthouse, over her ordeal.

Her legal saga started after Halliburton failed to take any action against her alleged attackers, and the Justice Department and military also failed to prosecute. Jones then tried to sue the company for failing to protect her. But thanks to an employment contract created during the tenure of former Halliburton CEO Dick Cheney, Jones was forced into mandatory binding arbitration, a private forum where Halliburton would hire the arbitrator, all the proceedings would be secret, and she’d have no right to appeal if she lost.

Data from the American Arbitration Association showed that Halliburton won more than 80 percent of its cases in arbitration, and when I looked at the data two years ago, it showed that out of 119 cases Halliburton arbitrated over a four-year period, only three resulted in the employee actually winning any money. The deck was clearly stacked against Jones from day one.

After 15 months in arbitration, Jones and her lawyer realized the same thing and went to court to fight the arbitration agreement in the hopes of bringing her case before a jury. Jones argued that the alleged gang rape was not related to her employment and thus, wasn’t covered by the arbitration agreement. Finally, two years later, a federal court has sensibly agreed with her. Tuesday, the 5th Circuit Court of Appeals, in a 2 to 1 ruling, found her alleged injuries were not, in fact, in any way related to her employment and thus, not covered by the contract.

One of the judges who ruled in her favor, Rhesa Hawkins Barksdale, is a West Point grad, Vietnam vet, and one of the court’s most conservative members, a sign, perhaps, of just how bad the facts are in this case. It’s a big victory, but a bitter one that shows just how insidious mandatory arbitration is. It’s taken Jones three years of litigation just to get to the point where she can finally sue the people who allegedly wronged her. It will be many more years before she has a shot at any real justice.

In the meantime, her case may bolster pending legislation that would ban mandatory arbitration clauses in employment and other consumer contracts. Jones’ victory comes as yet another body blow to a practice that has come under serious fire in recent months as heavily rigged against consumers. In July, the Minnesota attorney general sued one of the nation’s biggest arbitration firms, the National Arbitration Forum, after discovering that it had financial ties to debt collection companies that used its services to collect credit card debts. Not surprisingly, the NAF ruled in favor of the credit card companies in virtually every case, and fired arbitrators who sided with consumers.

The lawsuit led to NAF’s agreement to stop arbitrating consumer debt collection cases. Since then, Bank of America and other financial firms have said they will stop using arbitration clauses in their credit contracts. All that hasn’t stopped the U.S. Chamber of Commerce from continuing to insist that forced arbitration is still “cheaper, faster, and fairer” than the civil courts, and from fighting the federal legislation. But with Jamie Leigh Jones as the poster child for the opposition, it’s hard to see how the business group can continue with the pretense.