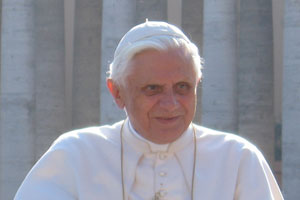 In recent weeks, the firestorm over sexual abuse of children by Catholic clergymen has reached even the pope himself.

The New York Times reported last week that Pope Benedict XVI was copied on a memo explaining that a priest who abused children would be reassigned to work with kids. The priest later abused again, and while the Vatican denies that the pope had any knowledge of the situation, the pontiff has come in for a barrage of criticism. Could the pope be impeached?

No. There’s no procedure in church law that allows for a pope to be impeached. It’s an open-and-shut case, Watson.

The pope has what is probably the world’s safest job. It’s essentially impossible to dislodge him without his consent. Even if he’s sick or otherwise incapacitated, he’s still the pope until he says otherwise. Theoretically, a pope can resign—and some of Benedict’s critics have urged him to do so. But it’s unlikely that this will happen. Canon law requires that any resignation be “freely made and properly manifested.” The last pope to step down from the post was Gregory XII, in 1415.

(The Catholic Encyclopedia notes that “it is well known that Pope Pius VII (1800-23), before setting out for Paris to crown Napoleon in 1804, had signed an abdication of the papal throne to take effect in case he were imprisoned in France.”)

Even if there were an impeachment procedure, it’s unlikely that it would ever be invoked. The institutional church’s response to the current media onslaught has been to rally around the pope. Prominent bishops are embracing and praising Benedict, not distancing themselves from him. Instead of responding to the issues raised by the Times‘ report, Benedict has so far refused to address it. Meanwhile, conservative Catholics and the Vatican’s official newspaper, L’Osservatore Romano, have argued that the Times series is part of a media vendetta against the pope. The media are acting “with the clear and ignoble intent of trying to strike Benedict and his closest collaborators at any cost,” the paper wrote.

The very idea of impeaching the pope is somewhat inconsistent with Catholic theology. According to the church, the pope is the “Vicar of Christ” on earth, the successor of Saint Peter. Doctrine does not say the pope is always infallible (that’s a common misconception)—but he’s rarely, if ever, challenged by other important members of the Catholic hierarchy. Sorry, impeachment fans: This one’s a non-starter.