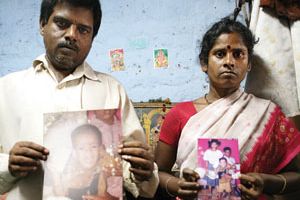 Mother Jones contributor Scott Carney took top honors in this year’s Payne Awards for Ethics in Journalism, established in 1999 by the University of Oregon’s School of Journalism and Communication “to honor the journalist of integrity and character who reports with insight and clarity in the face of political or economic pressures and to reward performance that inspires public trust in the media.”

In “Meet the Parents,” which appeared in our March/April 2009 issue, Carney followed the paper trail of a child who was kidnapped from his parents in the slums of Chennai, India, and sold by the kidnappers to a corrupt orphanage—which then worked with an American agency to adopt the child to an unwitting Midwestern family.

Although more than a decade had passed since the kidnapping, the glacial pace of India’s bureaucracy, along with a tangle of confidentiality laws, left the impoverished Indian parents with little hope of ever contacting their son. After months of research involving hundreds of such cases, Carney travelled to the United States, and was the first person to make contact with the adoptive family. According to the press release anouncing the award:

The Payne Awards judges applauded not only Carney’s exhaustive research but his willingness to engage in the story in a personal way and to reveal that in his writing. “He consciously recognized that he was part of the story—in fact, his participation was part of the story,” the judges’ statement reads. “The story included a number of ethical crossroads—and it is clear that these decisions were carefully considered.”

The only other award went to Wall Street Journal bureau chief Farnaz Fassihi, for “thorough, fair, honest and courageous reporting in producing a body of work that puts a human face on the crisis in Iran.” From the announcement:

“Although the stories are different, both of these journalists immersed themselves in complex, difficult situations in order to find the truth and serve the public interest,” Tim Gleason, Edwin L. Artzt Dean and chair of the Payne Awards judging panel, said on behalf of the judges. “One of the core elements of great journalism is the reporter’s willingness to struggle with complex stories to make sense of them for their readers. Sometimes that includes putting oneself at risk—physically or emotionally. In either case, you do this because you know that is the right thing to do. That is the definition of an ethical journalist. In these particular cases, the work demonstrates care, not just about getting the story, but about the people in those stories.”

Carney, a contributing editor at Wired, also has a pair of must-read features in our current issue: “Inside India’s Rent-a Womb Business” brings the writer to Anand, Mumbai, and Delhi as he looks into the growing business—and moral ambiguities—of surrogacy tourism. For “The Temple of Do,” Carney sacrifices his hair at a Hindu temple as part of his exploration into the humble origins of a lucrative beauty product. Clearly, for Carney, the story comes before his own personal comfort.