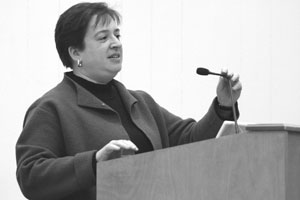 Now that it’s official and Justice John Paul Stevens is set to retire, the media is doing its usual routine of handicapping all the potential candidates to replace him. There’s talk of religious diversity—Stevens was the last protestant on a court now made up entirely of Catholics and Jews—and of course racial and gender diversity. But since we’re talking about all the things Obama might see as desirable qualities in his next Supreme Court nominee, how about picking someone who has never sat on a federal circuit court? If the current court shows any consistent bias, it’s in its kid-glove deference to appellate court judges, something virtually every sitting justice was prior to their high court appointments. And federal circuit court judges are almost by definition some of the most conservative people on the planet simply by virtue of their career choices.

Circuit court judges are insolated from the messy, fact-driven, jury trials overseen by the district courts, and even further removed from the delicate business of dealing with live humans as clients in private or nonprofit practice. More telling, though, getting on a circuit court requires a fair amount of political schmoozing usually cultivated in a white-shoe corporate law firm. That’s one reason perhaps that Chief Justice John Roberts always struck me as something of a suck-up during his confirmation hearings. He was well versed in the art of ingratiating himself to people in power. Given all that, it would be nice to see someone join the court who wasn’t part of that club. In an ideal world, Obama might find someone who was more of an outsider just to mix things up a bit. His choice of Sonia Sotomayor suggested a tilt in that direction. While she, too, was a sitting circuit court judge and former corporate litigator, she didn’t seem to do quite as much schmoozing to get their as some of the other justices, and came with a very different personal history. But everyone on Obama’s current short-list, at least the one making the media rounds today, comes from the far more familiar career path. All but one, that is.

While she, like Roberts, worked in corporate law and the White House counsel’s office, Solicitor General Elena Kagan has never been a judge. In fact, the former Harvard law school dean had never even argued a case before the Supreme Court before taking over as the government’s chief litigator last year. Her lack of experience in that department is one reason court-watchers thought Obama passed her over last summer in favor of Sotomayor. But now that she’s had a year defending the Obama administration before the high court, it’s clear that she’s more than qualified to take a seat there. I watched her argue her first case last September when she defended the Federal Communications Commission in the now-infamous Citizens United case. She was brilliant and fearless, with a touch of irreverance.

Not that you can extrapolate how someone will perform on the bench from one oral argument, nor does ten years in the ivory tower of Ivy League academia necessarily give Kagan a hugely different perspective on the world from someone with a lifetime appointment to the court of appeals (though having dealt with former Harvard prez Larry Summers on a regular basis just might!). But if Obama is choosing between someone like Kagan and another boring, male, DC circuit judge like Merrick Garland (also on the short list), I’m rooting for the non-judge Kagan. Sandra Day O’Connor she’s not, but she’s probably as close as we’re going to get from this administration.