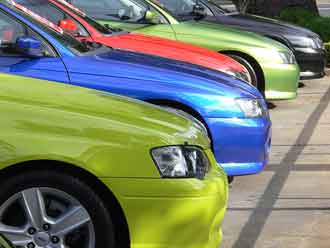 Even the Pentagon has weighed in, insisting that automobile purchases and dealer-assisted financing should be part of any new financial legislation because low-income military people are victimized in large numbers by shady car dealers that set up shop just outside many bases.

Officials say distractions caused by these bad auto deals could affect the readiness of the armed forces.

In February, Clifford L. Stanley, the under secretary of defense responsible for troop readiness, wrote in a letter addressed to a Treasury official that the Pentagon would “welcome and encourage” increased protections against “unscrupulous automobile sales and financing practices.”

But car dealers have formidable clout in the halls of Congress. MoJo staff reporter Stephanie Mencimer notes in “I Love a Mark in Uniform,” that the dealers gave some $9 million to candidates during the 2008 election cycle alone. And Senator Sam Brownback (R-Kansas), Rivlin reports, is sponsoring an amendment that would exempt further regulation of car dealers, who, in Brownback’s words, “are already struggling to get cars to market.”

The people most often targeted by dealers are struggling just to make ends meet. Last year, Mencimer spent some quality time around Norfolk, Virginia, where a high concentration of naive young recruits has attracted all manner of unscrupulous salespeople. Here’s a snapshot:

When [legitimate] promotional strategies fail to put boots on the lot, some dealerships resort to more aggressive methods like bird-dogging—the illegal tactic of paying service members and others to drag their buddies down to the lot, or local cabbies to bring in kids who arrive at the airport fresh from boot camp. One local dealership even convinced a USO volunteer to forward contact information for the newbies coming in at Norfolk International Airport. Salespeople would then call and claim, say, that the recruit had won a prize, and would he like to come down and collect it?

With so many dealers chasing military customers, the competition is intense. In 2004, a Norfolk-area dealership called Carland lost its license for essentially kidnapping young Marines from bases in North Carolina and northern Virginia. The victims had made the mistake of calling “Kim,” a name listed on business cards someone had sprinkled around Camp Lejeune and other bases. (It stood for “kids in the military,” military lawyers later discovered.) The card promised discounts, and when Marines called, Carland sent an employee to pick them up and drive them to its lot nearly four hours away. It was a one-way trip; the hapless grunts were told that they’d have to buy a vehicle in order to get back to base and not be declared AWOL. One stressed-out Marine paid $23,000 for a 1997 Civic, nearly quadruple its value.

Financing, certainly, fuels many of the scams—see “Five Ways Car Dealers Rip Off Soldiers (and Everyone Else).” And while the feds could take steps to crack down on lending abuses, they have limited authority to protect consumers from other common ruses. As Mencimer explains:

Regulation of auto sales falls largely to state dealer boards. But the dealers, who have even more clout in local and state politics, tend to dominate. Virginia, for instance, requires that dealers hold 16 of the 19 seats on its board. The current board can, and occasionally does, revoke a dealer’s license or impose fines for illegal practices, but it has only 11 investigators to monitor nearly 3,600 dealerships. In most cases, it doesn’t take action until after a consumer successfully sues the dealer, and even then, only if the dealer fails to pay. People in the industry “know what they need to do to stay legal,” says Bruce Gould, the board’s executive director. “There’s a moral problem with it, but not a legal one.”

The military has disciplinary boards that can order recruits to keep away from specific dealers, but it has rarely taken that drastic step. At the time of Mencimer’s visit, only one dealer among dozens was on the shit list, and that one was already out of business. So maybe part of the solution would be for the military to adopt a three-strikes policy. Screw three soldiers and you’re gone.

That would just leave the rest of us.