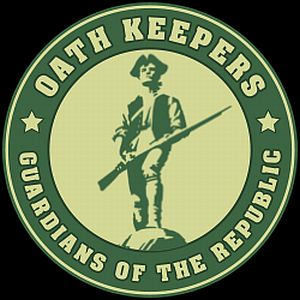 Never a dull moment with Oath Keepers, the self-styled patriot group we profiled in our March/April issue. The latest episode involved an interesting little standoff in Tennessee between state troopers and Darren Huff, a Navy vet and gung-ho member of the group. (Oath Keepers, consisting largely of current and former soldiers and police, urges members to disobey any orders they deem unconstitutional—such as orders to confiscate citizens’ firearms, herd people into detention camps, or harbor foreign troops on American soil.)

In this instance, Huff wasn’t exactly standing down. Talking Points Memo reports that he was pumped up over an earlier, April 1 standoff at the Monroe County courthouse in Madisonville, where Tennessean and former Navy officer Walter Fitzpatrick had tried to conduct a citizen’s arrest of Grand Jury foreman Gary Pettway. Fitzpatrick is a leading member of the Birther group American Grand Jury, which seeks to have President Obama indicted for treason, arguing that he is not a US citizen and is thus serving illegally as commander in chief. (Obama was also once a CIA operative, AGJ claims.)

So anyway, Fitz showed up, more or less made a nuisance of himself, and got himself arrested—which was probably unnecessary on all parts. But to fellow AGJ leader Carl Swensson, the authorities had crossed the proverbial line in the sand. In the video below, he calls upon all who took an oath to uphold the Constitution to march on the courthouse. “This man put his life, his honor, his fortune on the line for us in very much the same fashion as our founding fathers did,” Swensson implores. “And this is it. This is the moment in time that you who have been on the fence must get off of that fence. Please, go to the courthouse en masse.…I ask you right now to honor [[your oath]]. Get down there. Get him out of jail.”

Fitzgerald had previously asked Pettway to convene a grand jury to investigate voter-fraud allegations related to Obama’s victory, according to TPM, but Pettway refused. Now, as you will see, the group is pursuing Pettway for allegedly exceeding the legal term for a foreman.

Over in Georgia, Darren Huff heard Swensson’s (figurative?) call to arms. Huff is such a big-time Oath Keeper that he’s emblazoned the group’s logo on the side of his pickup. So he grabbed his AK-47 and Colt .45 and headed for Madisonville—intending to somehow thwart Fitzpatrick’s trial, which was set for April 20. But the feds already had an eye on Huff, according to Knoxville news station WBIR, and state troopers pulled him over after he entered the state—treating him respectfully, but cautiously, as you might treat a guy you know is toting weapons.

Huff was peaceful enough, apparently, during the lengthy stop. But according to WBIR, the troopers said Huff told them he and others planned to be back in a couple of weeks if not enough people showed up at the courthouse, and that he was ready to die for his rights and for what he believed in. Huff’s account of the incident was posted on Crooks and Liars (see below). But the FBI ultimately determined that the man was a threat and arrested him, WBIR reported, on charges of crossing state lines with intent to incite a riot and transporting a weapon in furtherance of a civil disorder.

Swensson has since written an open letter to Supreme Court Justice Antonin Scalia, decrying both arrests. No news yet from the big bench. Of course, it’s not just right-wingers who try to pull off citizens’ arrests to make a point, knowing that they’ll be the ones more likely to get arrested. But at least the lefties go after more worthwhile targets. They also tend to show up unarmed: