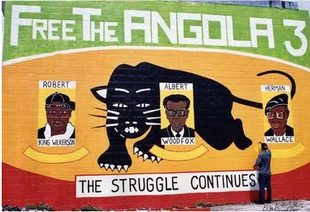 Albert Woodfox has spent nearly all of the last 38 years in solitary confinement at the Louisiana State Penitientiary at Angola. His case has brought protests from Amnesty International and Human Rights Watch, who argue that Woodfox’s decades in lockdown constitute torture, and from a growing band of supporters, who believe that he was denied a fair trial. For more than ten years, he has been fighting for his release in the courts. But yesterday, a ruling by a federal appeals court ensured that for the forseeable future, Albert Woodfox will remain right where he has been for the last three decades: in a 6 x 9 cell in the heart of America’s largest and most notorious prison.

It’s been nearly two years since a federal district court judge in Baton Rouge overturned Woodfox’s conviction for the 1972 murder of a guard at Louisiana’s Angola prison. Judge James Brady’s 2008 ruling, which ordered the state to retry Woodfox or release him, brought new hope to the 63-year-old Woodfox, who has been in Angola–originally for armed robbery–since he was 24. A member of the group known as the Angola 3, Woodfox has always contended that he was effectively framed for the guard’s murder–and then thrown into permament lockdown–because of his involvement with the Black Panther Party, which was organizing against conditions in what was then known as the “bloodiest prison in the South.”

Without drawing any conclusions about Woodfox’s guilt or innocence, Judge Brady of the Federal District Court, Middle District of Louisiana, concluded that Woodfox had not received due process at his 1998 trial (which was intself a replacement for a faulty 1973 trial). The main grounds for overturning Woodfox’s conviction were ineffective assistance of counsel, which allowed questionable evidence and irregular practices to stand without challenge. Woodfox had argued that better lawyers could have shown that his conviction was quite literally bought by the state, which based its case on jailhouse informants who were rewarded for their testimony. (Woodfox’s case was described in full in this 2009 article for Mother Jones.)

Judge Brady agreed, and in July 2008 he granted Woodfox’s Petition for Writ of Habeas Corpus, ordering that his conviction and life sentence be “reversed and vacated.” But some of the most powerful figures in the Lousiana justice system were committed to keeping Woodfox in prison and in lockdown. After his conviction was overturned, Attorney General James “Buddy” Caldwell declared, “We will appeal this decision to the 5th Circuit [Court of Appeals]. If the ruling is upheld there I will not stop and we will take this case as high as we have to. I will retry this case myself…I oppose letting him out with every fiber of my being because this is a very dangerous man.”

Caldwell put his case before the federal Fifth Circuit in March 2009–and in yesterday’s decision, he prevailed. In a 2-1 decision, a panel of three federal appellate judges ruled that Judge Brady had erred in overturning Wallace’s conviction. Their decision is not only a crushing blow for Woodfox, but also a manifestation of how far the rights of the accused have fallen in recent decades.

The Fifth Circuit Court of Appeals once had a reputation as one of the finest appellate courts in the land. In the 1960s, a small group of Fifth Circuit judges—mostly Southern-bred moderate Republicans—was known for advancing civil rights and especially school desegregation. But today the Fifth Circuit, which covers Louisiana, Texas, and Mississippi, is seen as among the most ideologically conservative of the federal appeals courts. It is notable for its overburdened docket and for its hostility to appeals from defendants in capital cases, including claims based on faulty prosecution and suppressed evidence. The court has even been reprimanded by the US Supreme Court, itself is no friend to death row inmates: In June 2004, Justice Sandra Day O’Connor wrote that the Fifth Circuit was “paying lip service to principles” of appellate law in handing down death penalty rulings.

In addition, the decision in Woodfox’s case shows the crippling effects on prisoners’ rights of the 1996 Anti-Terrorism and Effective Death Penalty Act (AEDPA) which was passed under Bill Clinton in the wake of the Oklahoma City bombings. That legislation has become the bane of anti-death penalty lawyers and activists, and of thousands of other prisoners seeking to challenge their convictions–a pursuit which AEDPA now renders nearly impossible.

As the Fifth Circuit noted in its ruling, “The AEDPA requires that federal courts “defer to a state court’s adjudication of a claim” unless the state court decision ran “contrary to…clearly established Federal law, as determined by the Supreme Court,” or was “based on an unreasonable determination of the facts in light of the evidence presented in the State court proceeding.” And as the judges pointed out, “An unreasonable application of federal law is different from an incorrect or erroneous application of the law.”

In other words, the state courts could be wrong, they just couldn’t be so far out as to be undeniably “unreasonable.” And in the end, the Fifth Circuit judges agreed with the State’s argument that “the district court failed to apply the AEDPA’s heightened deferential standard of review to Woodfox’s ineffective assistance claims.” For Woodfox, this means that his time in prison stretches before him with no foreseeable end in sight. His lawyers have promised to return to his case with new evidence, but that could take years, and the outcome might still be the same. In the meantime, Woodfox and fellow Angola 3 members Herman Wallace and Robert King have mounted a constitutional challenge to their solitary confinement, which may come to trial before the end of this year. (Wallace was Woodfox’s co-defendent in the guard’s murder, and has also been in solitary for 38 years. King, sentenced to life for another prison killing, had his murder conviction overturned and was released from Angola in February 2001 after 29 years in lockdown; he remains a plaintiff in this suit, which covers time he was in solitary.) That case, too, will eventually go before the Fifth Circuit–and even a win would mean only a release from permanent lockdown, not from Angola.