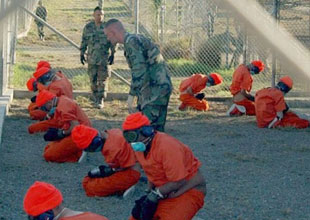 Detainees at Guantanamo Bay on Jan. 11, 2002. | US Navy photo via <a href="http://en.wikipedia.org/wiki/File:Camp_x-ray_detainees.jpg">Wikimedia Commons</a>.

Good news for accountability advocates: The government will soon launch an investigation of claims that it was involved with the torture, abuse, and “rendition” of terrorism suspects.

The British government, that is.

Eighteen months into the Obama administration, there has been no movement towards a full, public investigation of America’s treatment of detainees. But on Tuesday afternoon in the UK, David Cameron, the new conservative prime minister, announced that his government will launch an inquiry into Britain’s role in alleged detainee abuse. “Our reputation as a country that believes in human rights, justice, fairness and the rule of law—indeed for much of what the [security and intelligence] services exist to protect—risks being tarnished,” Cameron said. “The longer… questions [about potential abuse] remain unanswered, the bigger the stain on our reputation as a country that believes in freedom, fairness and human rights grows.”

The commission is due to start its work this year, will take some public testimony, and will reach “an authoritative view” on what happened, Cameron told Parliament. The inquiry will be headed by a prominent judge, Peter Gibson, who is currently the commissioner of the UK’s intelligence services. It will also include two other experts: former London Times scribe Peter Riddell and Janet Paraskeva, who runs the government’s internal civil service watchdog.

The inquiry won’t be fully public, however: “Some of its hearings will be in public,” Cameron said, but “information about sources, capabilities and partnerships” must be kept secret. Nor will the inquiry be “costly or open-ended,” the prime minister vowed. How those restrictions work in practice—and how they interact with the mandate to reach an “authoritative view”—will greatly influence the scope and usefulness of the inquiry.

Torture goes to the heart of the relations between the security services and the government. Many potentially serious enemies could be made if the inquiry happens, and produces findings that compromise intelligence, or relations with the US.

As it is, the US intelligence had threatened to withdraw co-operation if the British government published details of how US agents had treated Binyam Mohamed, a British resident held at Guantanamo Bay.

Cameron’s insistence that “intelligence officers [will not] be asked to give evidence in public” and “intelligence material provided to the inquiry panel will not be made public” could be intended as a sop to America, where the politics of investigating detainee abuse are very different. Though the Obama administration has released a range of documents illuminating some Bush administration policies, it has seemed reluctant to delve to deeply into the subject of abuse. That has deeply disappointed civil liberties advocates, who also point to the administration’s broken promise to shut the prison at Guantanamo Bay and its waffling on its decision to try 9/11 suspects in federal court.

President Obama could easily appoint a presidential commission to investigate torture and abuse allegations, but legislation granting all-important subpoena power to such a body would have to get past a Republican filibuster in the Senate. The British system of government does not allow the minority party to block this sort of investigation.

After announcing the inquiry, Cameron also revealed that his government was releasing the guidance that it gives to UK intelligence officers regarding detainees held by other countries. Here’s what he said about it:

It makes clear that:

One—our Services must never take any action where they know or believe that torture will occur.

Two—if they become aware of abuses by other countries they should report it to the UK government so we can try to stop it.

And three—in cases where our Services believe that there may be information crucial to saving lives but where there may also be a serious risk of mistreatment, it is for Ministers—rightly—to determine the action, if any, our Services should take.

The second point could come into play in the inquiry: what, if anything, did the British intelligence services and Tony Blair’s Labour government do about allegations of abuse by the United States? But the third point could end up being the most important. In America, accountability for detainee abuse has fallen most heavily on the people at the bottom of the totem pole: people like Abu Ghraib defendants Lynndie England and Charles Graner, or the unnamed interrogators who the Justice Department is investigating to see if they went further than the so-called “torture memos” allowed. The third pillar of the UK policy puts the responsibility for “enhanced interrogation” squarely where it belongs: on the shoulders of political decisionmakers.

This article has been updated and revised.