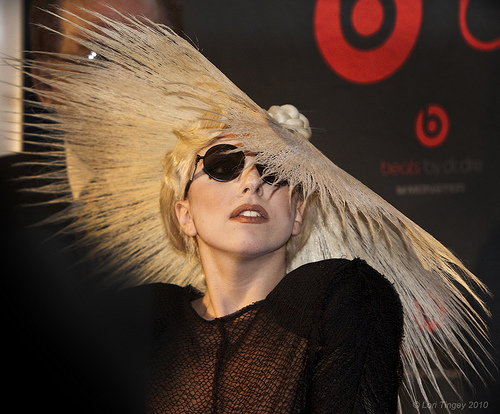 Apparently if you’re trying to smuggle classified Defense Department data for leaking purposes, all you need is a catchy dance-pop CD—in disguise. The New York Times reports today on the latest updates in the case of 22-year-old Pfc. Bradley Manning, the US soldier accused of leaking some 150,000 cables, secret videos, and government presentations. At least one of those leaks, a video of a 2007 American helicopter attack in Baghdad that killed a dozen people, including two journalists, was published online by Wikileaks in April under the title “Collateral Murder.” Earlier this month, Manning was charged with leaking the data, and could face up to 52 years in prison. For his efforts, Manning has been hailed by some as his own generation’s Daniel Ellsberg, the former military analyst who leaked the Pentagon Papers.

What we’ve learned today is how Manning did it—and that he had help. From pop star Lady Gaga. Yes, that Lady Gaga. Apparently Manning pulled the data off a protected Defense Department computer, the Times reports, using a sneakily labeled music CD and a bit of play-acting:

He was able to avoid detection not because he kept a poker face, they said, but apparently because he hummed and lip-synched to Lady Gaga songs to make it appear that he was using the classified computer’s CD player to listen to music.

Mr. Lamo said Private Manning described how he had used compact discs capable of storing data, but tucked inside recognizable music CD cases, “to bring the data out of the secure room.”

“He indicated he disguised one as a Lady Gaga CD,” Mr. Lamo said Thursday in a telephone interview. “He said he lip-synched to blend in.”

Where to start?! First, kudos to Times reporter Thom Shanker for slipping that “poker face” reference into this Gaga-inspired story. (If you don’t get it, watch this.) Honestly, I thought the news pages of the old gray lady were too stiff for a quip like that. Second, Lamo says Manning “lip-synched to blend in.” Really? Are we to think that intel officers in Iraq and Afghanistan sit around all day humming hits like “Love Game” and “Alejandro”? (They’re certainly not letting them watch that ludicrous “Alejandro” video, at least.) And finally, who still owns CDs anymore? In the age of the iPod/Zuma/Pandora/etc., the fact that anyone would own an actual compact disc and bring it to work is about as suspicious as a steel-plated briefcase handcuffed to your wrist.

Jokes aside, though, this is pretty serious stuff, that a soldier could so easily lift 150,000 diplomatic cables from a supposedly protected computer. So much for “classified” data. And just like Defense Secretary Robert Gate’s crackdown on media access after Gen. Stanley McChrystal’s resignation, keep an eye out for a ban on postmodern, synth-heavy, dance-pop CDs wending its way through the halls of the Pentagon right now.