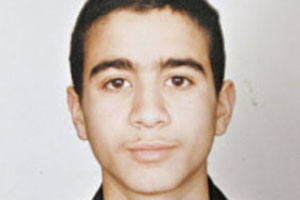 The terrorism trial of Omar Khadr has been suspended after Khadr’s only lawyer coughed, then collapsed in court on Thursday.

Khadr, who would be the first person to be tried for war crimes allegedly committed as a minor, was captured in Afghanistan in 2002, when he was 15. He is charged with throwing a grenade that killed Army Sgt. Christopher Speer.

Lt. Col. Jon Jackson, Khadr’s military lawyer, was evacuated from Guantanamo Bay on Friday and flown to the US for medical treatment. Khadr’s trial will be delayed for at least 30 days. Here’s Carol Rosenberg, reporting from the scene:

Former West Point law instructor Gary Solis, a retired Marine judge, said it is not unusual to suspend a military trial for a long weekend with instructions to a jury to not read media coverage. A 30-day delay that might send jurors back to bases around the world “is very unusual,” he said.

Jackson was put on “convalescent leave,” … a status that allows him to continue to draw a salary and not use up vacation days. [A base official] cited privacy reasons for not releasing the lieutenant colonel’s health condition. He was on a morphine drip Thursday night at the base hospital.

Jackson, who has been on the case for about a year, became Khadr’s lone lawyer within a week of [gall-bladder surgery six weeks ago] after the Toronto-born teen fired two volunteer civilian attorneys from Washington.

[Jackson was ordered] to stay on the case, but the Pentagon Defense Office provided him no additional assistance beyond two enlisted paralegals who had already been on the case. It was not known if Jackson had sought the assignment of an additional uniformed lawyer.

Khadr, who sits in court with three guards behind him, leaped to his feet when his Army defender collapsed about 4 p.m. Thursday, according to Khadr family lawyer Dennis Edney, who functions in the war court only as a consultant because he is not a U.S. citizen. The guards didn’t interfere.