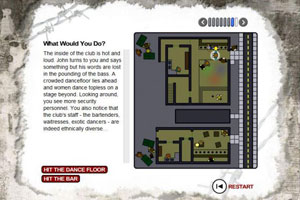 Pop quiz, hotshot. You’re a mid-career Army officer. Your bosses have (finally) issued some guidelines condeming human trafficking by soldiers and contractors. And they want you to develop the training curriculum for the troops. What do you do? What do you do?

A) Stick to the military M.O. and make a dry, dull, text-heavy, official-sounding PowerPoint slide? Or, do you:

B) Make it hip and toss in some stuff soldiers dig, like Choose Your Own Adventure books, shady foreign nightclubs, heavy drinking, and ethnic stereotypes? 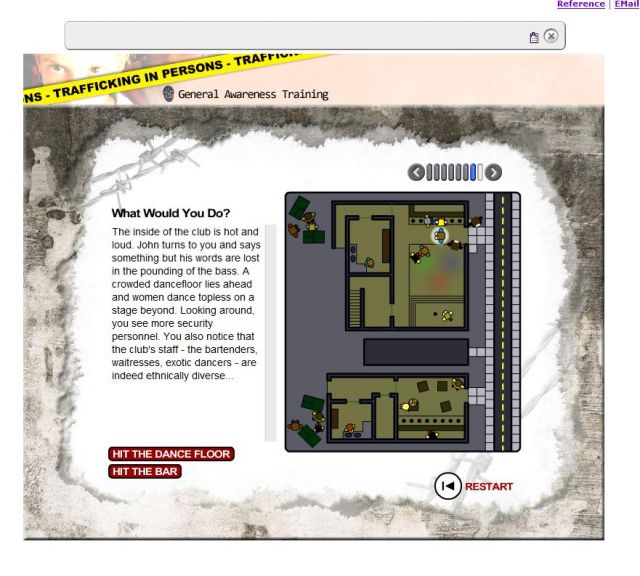 It’s true, somebody in the Army’s got a peculiar sense of humor. In late 2005, media reports began to highlight the federal government’s inability to enforce the anti-trafficking guidelines at its installations abroad. (Such reports continue to this day; they include stories about foreign women pressed into service as prostitutes for contractors and soldiers in Iraq). As the attention grew, the Army issued its first human trafficking policy in 2006 to cover soldiers and DOD civilians. “Trafficking in Persons is the third largest and fastest growing criminal activity in the world,” the policy states. “A grave violation of human rights, it is a world-wide criminal threat to security, civil rights, and stability—and a direct threat to our national foreign policy goals.”

Translation: Human trafficking is no laughing matter. And yet the screenshot above shows how the Army trains its uniformed personnel to be vigilant against trafficking in persons, via an online module at the password-protected Army Knowledge Online (AKO) portal. Soldiers are told to picture themselves in a seedy foreign bar with a “petite and attractive Asian” bartender. Do you answer that call on your cell phone, or ask her if she’s in danger? When that last beer makes you queasy and you can’t find the bathroom, do you make for the exit, or do you head to the kitchen? When there’s a misunderstanding, how do you tell the proprietor: “I just thought you were offering lap dances…I…have to go.”* (Note: That’s an actual quote from the Army’s training.)

To be fair, the Army issues a caveat to the training:

WARNING: This training deals frankly and candidly with the realities of trafficking in persons (TIP), which capitalizes on human misery and exploitation. To some people, being exposed to the details about trafficking in persons (TIP) may be considered distasteful. This TIP training addresses what some may see as an upsetting look at the realities of the problem. For all, that is the nature of the problem. This training is intended to increase everyone’s awareness of that issue and to help serve to end it.

Distasteful, sure. But does the module provide a “look at the realities of the problem”? Army officer Crispin Burke, who edits the milblog Wings Over Iraq, took the entire training session on AKO. Then he provided Mother Jones with additional screenshots of the module, which would be funny if they weren’t so sad (see them all below). Burke also used WOI to express his misgivings over the training:

Don’t get me wrong:  I applaud the US Army’s efforts in combating human trafficking, a racket which rakes in $32 billion annually. Yet, developing a choose-your-own adventure which features prostitutes, child laborers, and strippers probably isn’t the best way to encourage troops to combat trafficking. If there’s one thing I’ve learned about video game culture, it’s that incorporating these elements into video games only encourages otherwise law-abiding citizens to unleash their Jungian dark side in a virtual, consequence-free environment.

There’s no question military culture and video game culture are converging in interesting ways. But Burke makes an interesting point: Could the Army’s human-trafficking awareness program ironically aid in dehumanizing the crimes and their victims? Whatever the service’s good intentions were, “I just found it bizarre that the Army would make its point with an interactive game,” Burke says. “With graphics.”

All screenshots below are via the US military’s Army Knowledge Online portal for internal soldier communications: 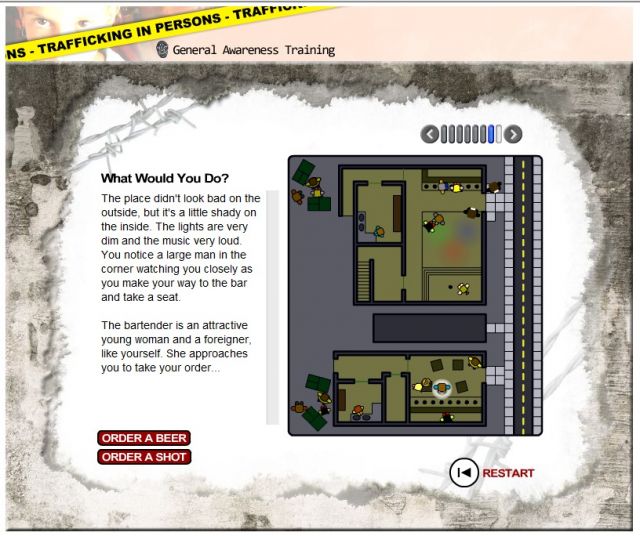 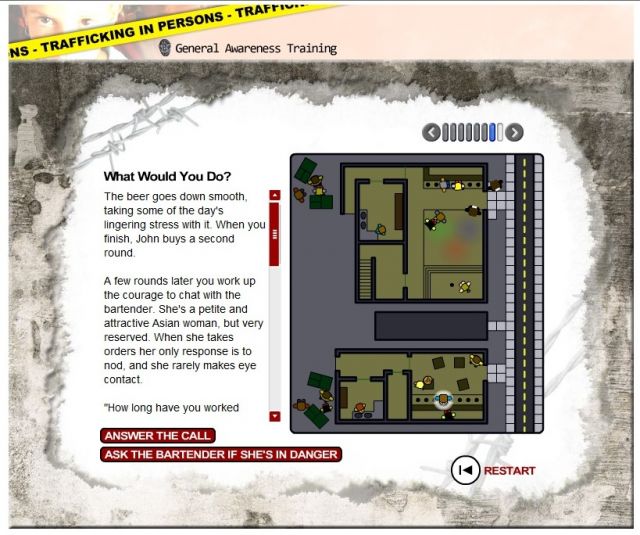 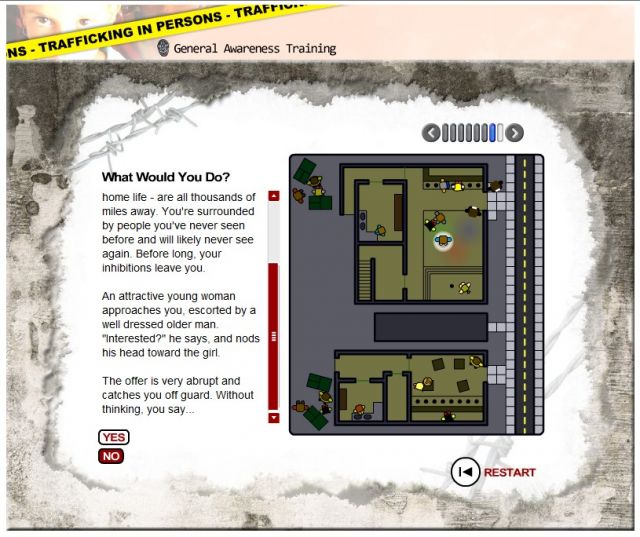 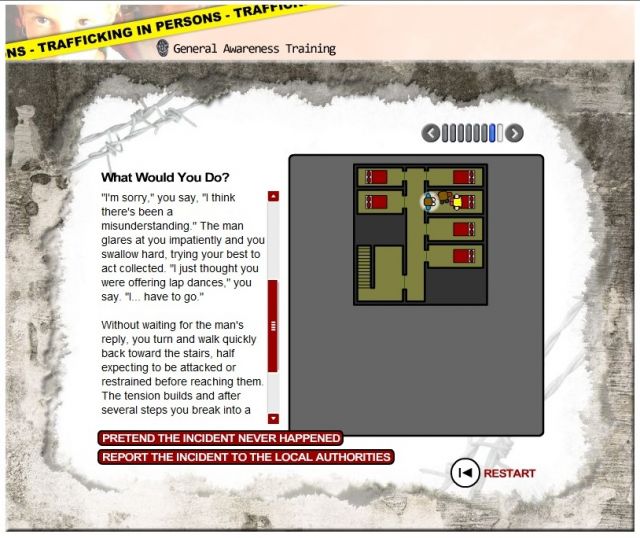 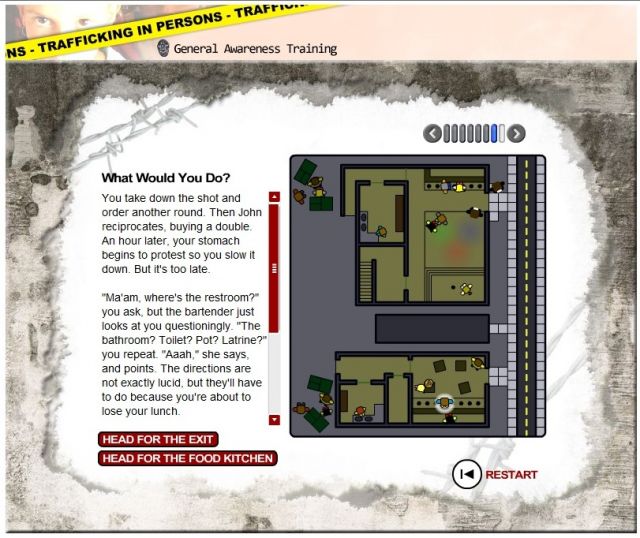