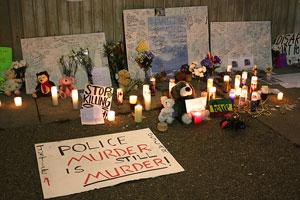 By now, you’ve probably read Charlie LeDuff’s stellar article in the November/December issue of Mother Jones about Aiyana Stanley-Jones, the seven-year-old shot by Detroit SWAT officers in her home during the filming of an A&E reality TV show. You’ve probably even heard of Oscar Grant, the 22-year-old black man fatally shot in the back by Bay Area Rapid Transit cop Johannes Mehserle on New Year’s Eve, an incident which was also caught on video. On November 5, Mehserle was sentenced to two years for involuntary manslaughter. After credit for time served, he will spend a little less than a year behind bars. That’s almost four years less than the Virginia man who was convicted in August of fatally shooting a dog on purpose. Mehserle’s sentence was decided by Los Angeles Superior Court Judge Robert Perry, the same judge who during the Rampart scandal—in which more than 100 criminal convictions were overturned, and the city of LA had to pay more than $50 million to individuals who had false evidence planted on them—gave a reduced sentence to an officer involved in wrongful police shootings and cover-ups. Days after Mehserle’s sentence was delivered, 37-year-old Derrick Jones became another one of the 350 people killed annually by police officers in this country. Like Grant and Stanley-Jones, Jones was black and unarmed. Colorlines has more on his story here.

If murder charges are brought against the officers behind Jones’s shooting, most likely they will be acquitted or face a reduced sentence: In the past 15 years, there’ve been only six cases where a murder charge was filed against a police officer. Almost none resulted in a murder conviction. “The lack of law enforcement accountability undermines not only the integrity of law enforcement itself, but the safety of all of our communities,” NAACP president Benjamin Jealous said after Mehserle’s sentence was declared. Oscar Grant’s uncle Cephus Johnson also offered a few clues as to why cops wrongfully kill people of color and how they get away with it. Watch after the jump.

So in response to the frequent use of excessive force by police officers, every Tuesday expect a police shooting roundup. A few months ago, I posted a few cases where cops have shot unarmed civilians along with some reasons why. And since it keeps on happening, here’s a rundown of more seminal instances that have happened since then or that I missed:

September 7: After an armed intruder busts through his living room window, Anthony “Tony” Arambula, a licensed gunowner, holds the guy at gunpoint while his wife and two kids run outside. Tony calls 911, and the operator keeps recording when without any warning Officer Brian Lilly arrives at the scene and opens fire on Tony’s back, shooting Tony twice while he’s on the ground. “You just killed the homeowner. The bad guy is in there,” Tony says, before the officers arrest the real intruder. When Tony tells the officers he can’t breath, they tell him to “shut the fuck up.” Then they conspire to cover up the case, which is all recorded on a 911 tape that they didn’t know was running, but you can listen to it here. There’s more: The police don’t call the ambulance for Tony, but instead place his bleeding body on the hood of their squad car and drive the car down the street with Tony lying on top. Tony survived, but the Arambula’s are suing the state of Arizona for $5.75 million. You can read the Arambula’s complaint here (PDF), in which Lilly “claims that he fired…after he saw a man who might be ‘Hispanic’ down the hallway with a gun.” Officer Lilly’s been cleared of any wrongdoing.

September 24: During a drug raid in Washington state, Keamie D. Powell, a 24-year-old unarmed, pregnant woman attempts to escape outside of her bedroom window and is shot by a state detective sergeant. Sheriff’s office spokesman Sgt. Dave Reagan wrote in a press release (PDF):

“During efforts to prevent her escape, a shot was fired and the woman suffered a minor wound to her upper torso. She fell out the window and received first aid from containment officers stationed at the back of the apartments.”

The Spokesman-Review reports that Sgt. Reagan “offered no further details about why the detective used deadly force, which law enforcement officers are trained to use if they believe their lives are in danger.” Keamie faces three felony drug charges. The detective has not been charged with a crime.

October 5: Elvira Fernandez calls the police to pick up her son 29-year-old Daniel Rodriguez from her trailer in Arizona. Daniel damaged some of her property during an argument they had and she wants the responding officers, Richard Chrisman and Sergio Virgillo, to remove him. According to the police report (PDF), at one point “Officer Chrisman drew his service pistol and placed the muzzle of the pistol against the head/temple of Daniel. Officer Chrisman stated words to the affect of ‘I don’t need no warrant motherfucker’ in response to Daniel’s telling them they needed/ didn’t have a warrant.” The officers tase Daniel twice, pepper spray his eyes, fatally shoot his dog, and when Daniel tries to ride away from the trailer on his bike, Chrisman fatally shoots him. On Wednesday, a judge barred the city of Phoenix from firing Chrisman, the Phoenix New Times reports. Chrisman is charged with second-degree murder in a criminal case that is ongoing.

October 13: Undercover officers in Plano, Texas attempt to arrest 25-year-old Michael Alcala for allegedly trying to sell them heroin. A sergeant with the narcotics unit arrives at the scene and as he approaches Michael, fires one shot which kills Michael, who was not in possession of narcotics when he was killed. The sergeant says it was an accident. A grand jury recently decided the officer won’t face charges.

October 17: A fight breaks out at a bar in New York where Danroy “D.J.” Henry Jr, a 20-year-old Pace University football player, is waiting outside in his car to pick up friends. The Boston Globe reports what happened when the police arrived:

Police in Mount Pleasant, N.Y., where the bar is located, have said that a police officer tapped the window of the car Henry was driving, and that he sped off toward another officer. That officer ended up on the hood and fired, they said. Another officer also fired, according to police, though it is unclear which bullet killed Henry. Witnesses have said, however, that Henry thought the officer was asking him to move out of a fire lane when he tapped on the window, and that police officer Aaron Hess jumped in front of the car. Henry had no time to stop, witnesses said, and Hess jumped on the hood and started firing.

While shot and bleeding, Danroy was handcuffed and died shortly after. His family has called on the US Department of Justice to take over the case. A grand jury investigation is currently underway. The officers have not been charged.

October 21: Three North Carolina officers respond to a call that a woman is acting hysterical, yelling, and screaming in a Motel 6 parking lot. One of the officers approaches 37-year-old Emmerli Latrice Wilconxson, who police officials say made threatening comments and charged at officers before they shot her several times. She was unarmed. She survived and the case is being investigated.

October 29: Dallas police officers get a call that prostitution, drugs, and gang-related crime is going on at an apartment complex. When police arrive, they meet Tobias Arthur Mackey, 25, at a breezeway. Dallas Morning News reports:

[Officers] said Mackey concealed his hands and ignored officers’ instructions to show them, then made sudden movements. One of the officers [Matthew Tate] fired at Mackey several times, killing him and wounding an 11-year-old boy who happened on the scene.

Tobias’s family is calling for a federal investigation of the incident. The officer, Tate, has been placed on administrative leave while the Dallas Police Special Investigation Unit investigates the shooting. Vicki Stephens, Mackey’s aunt, told WFAA: “We’re not scared of the drug dealers; we’re scared of the police.”

November 7: Tony Menchaca tells a clerk at a taco stand in Texas to call 911 because there is a man nearby with a gun. The man he describes is himself. When the SWAT team and Dallas police officers arrive, Tony tells them he is schizophrenic, and on meth, and he has a gun that he intends to use. Police officials say Tony made a sudden movement for his waistband. Five officers open fire, shooting him 23 times. Tony was unarmed. His family confirms that he suffered from schizophrenia. An investigation continues.

Know of any more cases? Post them in the comments sections below.