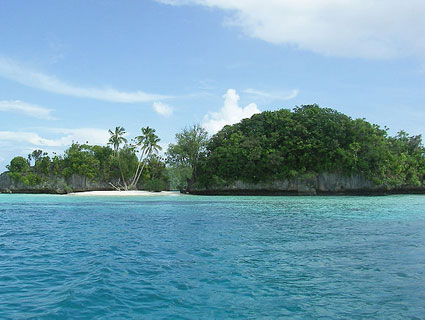 Palau: It doesn't look so bad. (In fairness, it's not all this pretty. And just because you might want to visit somewhere doesn't necessarily mean you'd want to live there.)Peter Binter/<a href="http://en.wikipedia.org/wiki/File:Palau-rock-islands20071222.jpg">public domain</a>

On Monday, the Supreme Court said it would not hear an appeal from a group of five Chinese Muslims held at the detention facility in Guantanamo Bay. The men, who are members of the Uighur minority group from western China, fear that they may be tortured or executed if they are returned to their home country and therefore seek to be released in the United States. Both the Bush and Obama administrations determined long ago that the Uighurs are not a national security threat, and pretty much everyone agrees that their continued detention is unlawful. So these guys should be released, right?

Unfortunately for the Uighurs, there’s a catch, and it’s why the Supreme Court declined to hear the case: the government has already offered to resettle the men in the Pacific nation/future climate change victim/onetime Survivor set of Palau, but they have refused. (Another group of Uighurs was resettled in Palau in 2009.) As Justice Stephen Breyer explained in a statement joined by Anthony Kennedy, Sonia Sotomayor, and Ruth Bader Ginsburg, “under present circumstances,” there is “no Government-imposed obstacle to petitioners’ timely release and appropriate resettlement.” Breyer also noted that even though the Uighurs declined the Obama administration’s first resettlement offers, the government says it’s willing to “discuss the matter with the government of Palau,” and is still working to find other countries willing to take the five men.

It seems like the most obvious thing to do here would be for the court to order the Uighurs resettled in the United States, as they desire. But the liberals on the court probably don’t have the votes for that. While Kennedy joins the liberal bloc on many terrorism-related cases, the liberals would be without Elena Kagan, who was disqualified from ruling on the Uighur case because she worked on it in her previous job as solicitor general. As Breyer noted, the court was eager to resolve whether a court could order the release of an “unlawfully held prisoner” into the US “when no other remedy was available.” Unfortunately for the Uighurs, they have another remedy available (namely Palau), and this time around, that made all the difference. So this decision ends up as just another reminder that not everyone wants to leave Gitmo. The war on terror sure produces some odd moments.