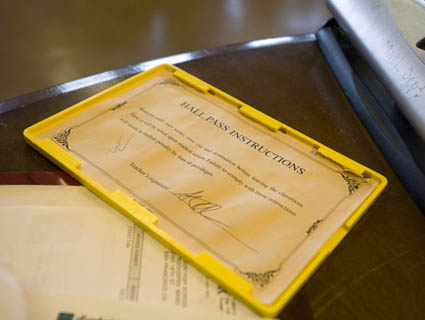 Natalie* is a smart and witty sophomore at Mission High in San Francisco. Despite her struggles with ulcers and depression, she tries to make it to school on time every day. But since Natalie commutes across town, taking two buses in the process, some days she is late for her 8:10 a.m. history class. Last time she walked into class 10 minutes late, her teacher Ms. Bowman nodded and smiled at her without interrupting the lecture.

If Natalie went to public school in Los Angeles, though, she might have been stopped by a police officer at the bus stop or near the school entrance. The police officer would question her about her tardiness, might search her bag, and would write up a ticket for $240. That’s because until recently, the Los Angeles city and school police would do “sweeps” near schools and give out tickets to students who were late or not in class. The San Fernando Valley Sun reports that student Gustavo Fernandez was slapped with five truancy tickets from the LAPD during his senior year at Los Angles High School, and he now owes the city close to $2,000 in fines. Because of this debt, he can’t get a driver’s license. Los Angeles police issued more than 47,000 citations for high school students who are not in class from 2004 to 2009, according to the Los Angeles Times. Manuel Criollo, the lead organizer against this trend with the Labor and Strategy Community Center, says that increasing number of such citations are going to students who are actually on their way to school, but are running late for often legitimate reasons. Criollo and other advocates also noted that these tickets were issued primarily to students of color: 62 percent were issued to Latino students, 20 percent to Afrian-American and only 7 percent to white students.

Though the fiscal burden from multiple tickets can be onerous, it is not to say that cutting school or being chronically late for classes is not a serious issue. The District Attorney’s office of San Francisco says that 75 percent of all truants will eventually drop out of school, and 94 percent of homicide victims under 25 in San Francisco were high school drop outs. The question is how you deal with it: How much school-based counseling and intervention should a school be asked to provide before students are pushed toward the criminal justice system? What is the right balance between “carrots” and “sticks”?

Los Angeles community organizers say that Los Angeles Unified School District (LAUSD) has moved way too far in the direction of punishment, which according to their findings (PDF), is pushing low-income students and students of color increasingly toward prisons rather than colleges. Fortunately for Fernandez and LAUSD’s 617,000 students, these tactics are about to change. The LAPD has agreed to stop truancy sweeps during the first hour of class, and daytime curfew sweeps won’t happen unless there is suspected criminal activity. This change in policy comes thanks to several years of hard work by a coalition of community organizations, including the Labor and Strategy Community Center, Public Counsel, and the American Civil Liberties Union of Southern California.

Police officers now have to ask students if they have legitimate explanations for not being in class before writing tickets, and they have to record those conversations. But Criollo says that’s just half of the battle. The changes have been approved by the LAPD, but not by the Los Angeles School Police Department, which interacts with students more often. Criollo and other advocates met with the Los Angeles School Police Department this week, and school police officials promised to adopt similar directives. This is good news, Criollo says, because there are no studies that prove the tough approach of using citations to improve attendance works. “Once ticketing stopped at Roosevelt High School in Los Angeles, the attendance actually went up 50 percent,” he said.

Criollo hopes that as President Obama and Congress consider reauthorization of No Child Left Behind (NCLB) this year, federal lawmakers pay attention to the growing trend of using police officers to deal with school-based issues. “NCLB should be rewritten from a perspective of how do we change the culture of a school. I don’t want policies that create fake numbers around attendance, and punish schools that try to work with all students. A school that gives a lot of tickets should be investigated.” The Strategy Center found that Roosevelt High School in Los Angeles did one of their heavy police sweeps on the day of the testing. So as we use standardized testing to rate schools, Criollo says, authorities need to look at the number of citations, suspensions, and expulsions to supplement that data and make sure that a school’s attendance and test scores numbers are not inflated.

Natalie’s district, the San Francisco Unified School District (SFUSD), uses six “carrots” or goes through six, school-based counseling and intervention steps before a truant student is referred to the District Attorney’s office. Mission High School principal Eric Guthertz told me that most students who have attendance issues are usually dealing with a crises at home or at school. “There is a lot of room before you get to the police. We meet with the parents and students many times, and we do home visits. In some extreme cases, a police officer might drive us to the house, but we do the talking,” he told me. While school-based counseling and interventions take more time and resources than referring them to police, it works better in the long haul, Guthertz says. And he’s got numbers to prove it. The drop out rate at Mission High went down from 8.8 percent to 1.6 percent last year, after more school-based measures were implemented. SFUSD reports that the attendance among chronically truant students at the elementary school level in San Francisco also went up 33 percent.

*Editors’ Note: This education dispatch is part of an ongoing series reported from Mission High School, where education writer Kristina Rizga is embedded for the year. Names of students are changed. Read more: “One Undocumented Teens Tale.” Plus: Sign up for our weekly newsletter to get all of the latest Mission High dispatches.