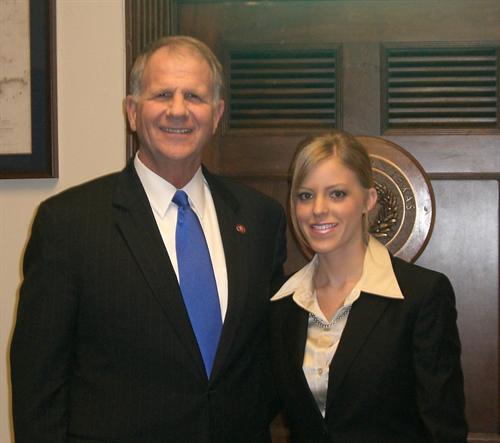 Rep. Ted Poe (R-Texas) has been one of Congress’ biggest supporters of Jamie Leigh Jones, the former KBR contractor who in 2007 alleged she’d been drugged and gang-raped by her co-workers, then imprisoned in a shipping container in retaliation for reporting the episode. Poe played a dramatic role in the harrowing story. Jones claimed that once she was able to call her father in Texas, he in turn called Poe, who then summoned the State Department to rescue her from KBR.

In December 2007, Poe’s office issued a press release trumpeting the congressman’s role. “Congressman Poe was instrumental in facilitating the return of Jamie after receiving a call from her father in July 2005. Congressman Poe contacted the State Department’s Department of Overseas Citizen Services, which then dispatched agents from the U.S. Embassy in Baghdad to rescue Jamie.”

Poe’s high-profile role helped turn Jones’ story into a national scandal. But on Friday, the Houston jury hearing her civil case against KBR ruled that Jones was not, in fact, raped. Evidence and testimony presented during the trial highlighted many inconsistencies in Jones’ story—but it has also inadvertently revealed a big hole in Poe’s account. State Department records and phone logs show that Poe had nothing to do with rescuing Jones.

But Poe, a conservative former prosecutor who is more often in the news for quoting the Klan on the House floor, referring to immigrants as grasshoppers, or questioning the president’s citizenship, got lots of kudos for his role in the Jones drama. And he has continued to take credit for calling in the cavalry to help Jones. As recently as April 2010, Poe was on the Hill talking about his part in her rescue, saying:

After being in Iraq just a few days, she said she was drugged and gang raped by fellow employees. She was held hostage in a cargo container for 24 hours without food or water. She was assaulted so badly that later she had to have reconstructive surgery.

She convinced one of the people guarding her to let her borrow a cell phone. She called her dad. Her dad called my office in Texas. With the help of the State Department, we helped immediately to rescue her, and she was quickly brought back to America.

The Congressional Victims Rights Caucus, which Poe co-chairs, gave Jones an award in 2008 for “her efforts in raising national awareness of the plight of Americans victimized abroad.” And Poe often introduced Jones at her Hill appearances. Jones even gave her daughter the middle name Poetry in honor of the congressman. He appeared in ABC’s original 20/20 expose in 2007 that put Jones’ story on the map, and Poe makes a cameo with Jones in Hot Coffee, a new documentary on the civil justice system airing on HBO. (Full disclosure: I am also in the film.)

Since the verdict, however, Poe has been noticeably silent about the case. He did not respond to a request for comment.