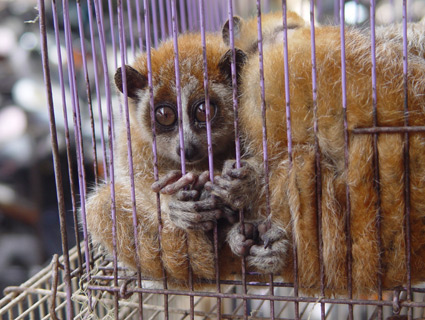 Here’s something that will make you loathe organized crime even more than The Godfather, Part III: Mobsters murder many adorable, beautiful animals to make huge profits.

Elizabeth Bennett of the Wildlife Conservation Society writes in a recent paper that underground wildlife smuggling operated by crime syndicates is “decimating the world’s most beloved species including rhinos, tigers, and elephants on a scale never before seen.”

The illegal sales of animal parts—slow loris appendages, elephant tusks, bear paws, freshwater turtle shells, tiger skulls—has exploded over the years, particularly in Africa and in countries like Vietnam and Thailand, posing an existential threat to various species. And if that weren’t enough, the trade also helps ruin ecosystems and drain resources in poor countries.

The complexities of shifting smuggling routes, not to mention “e-commerce” and government corruption, have presented a daunting challenge to national efforts and international cooperation apparatuses like the ASEAN Wildlife Enforcement Network, even as certain crackdowns on illegal activities like poaching show some signs of intensifying.

Tackling the issue by focusing on demand reduction is a challenge, given deeply ingrained cultural beliefs in the efficacy of certain wildlife medicines, leading to tacit support for the trade across many sectors of Asian society. Any change is likely to be on a generational time scale but we do not have that luxury of time for many of the species currently targeted by trade. In the short-term the only practical way to reduce demand is through enforcement…

And the solution to this problem is, naturally, the most obvious but elusive one: more money, more manpower. Bennett’s recommendations include increasing technical support to developing countries, building clearer bureaucracy, and issuing smart phone apps to law enforcement for better species identification. Corruption is also an important issue, as many wildlife enforcement agencies in poor countries can be bribed out of effectiveness. However, Bennett also notes the appalling shortcomings of many current international enforcement measures, even when agencies aren’t corrupted (emphasis my own):

The ASEAN Wildlife Enforcement Network is often held up as a good example of an international initiative to combat wildlife crime…but its home base of Thailand remains one of the three countries most heavily implicated globally in the illicit trade in ivory…CITES [Convention on International Trade in Endangered Species] and Interpol each only have a single person in charge of enforcement of wildlife crimes.

With vast criminal organizations running an illicit animal trade worth an annual $10 billion (making it one of the top-5 most lucrative black markets in existence), it’ll take more than one CITES rep per country to stem the trade, and help animals stay where they belong: in nature.