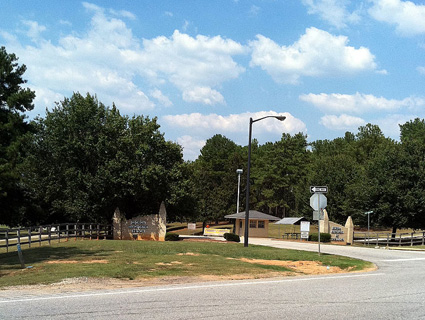 On the night of September 21, Georgia executed death-row inmate Troy Davis despite lingering doubts about his guilt in the 1989 killing of an off-duty Savannah police officer. Just a few hours later, the state quietly announced that another man, Marcus Ray Johnson, would be executed on October 5. But Johnson, convicted of the brutal rape and murder of Angela Sizemore in 1994, was granted a stay Tuesday by Dougherty County Superior Court Judge Willie Lockette in light of newly discovered forensic evidence that has never been DNA-tested. The US Supreme Court rejected an appeal from prosecutors to overturn the stay.

According to trial records, Johnson met Sizemore at a bar on the west side of Albany, Georgia, on March 24, 1994. Johnson, angry that another woman had spurned his advances, began to chat up Sizemore, who was so drunk that the bartender refused to serve her. He handed her keys to Johnson, and the two left to hook up in a vacant lot a couple blocks away. A post-coitus argument ensued; Johnson told police that he punched Sizemore in the face, and the next thing he knew he woke up the next morning in his front yard.

That morning, Sizemore was found dead in her white van on the opposite side of town. A medical examiner determined that she had been cut and stabbed 41 times and had wounds consistent with the blade of a small knife belonging to Johnson. She had been brutally raped with a tree limb, the prosecution claimed. Blood was found on Johnson’s clothing, and a handful of witnesses placed him in the area shortly before Sizemore’s body was found.

But the records show that investigators only found a small amount of blood on a thread of Johnson’s leather jacket, and that crime lab testing only established an inconclusive blood-type match. There is no mention of DNA testing on the tree limb, nor of any blood on the knife. Why, Johnson’s defense team argues, does so little physical evidence exist when a victim of 41 stab wounds surely would have bled profusely?

Blogger J. Bennett Allen, a veteran juror who follows death penalty cases, questioned the thoroughness of the murder investigation and noted that Sizemore’s husband, Richard Barker, had a history of smuggling undocumented Haitians into Florida. Barker was in jail when Sizemore died, but Allen suggests it’s plausible that people involved in Barker’s illicit activities may have had a motive to kill Sizemore. That may be unlikely, but it’s not clear whether investigators seriously considered the possibility.

“When you have evidence that’s coming back negative and inconclusive, there’s too much doubt to execute him,” says Kathryn Hamoudah, a member of Georgians for Alternatives to the Death Penalty. The Troy Davis case, she says, made that all too clear, and she applauds Judge Lockette for exercising caution in Johnson’s case. “[W]e are in that type of atmosphere,” District Attorney Edwards told WALB, referring to the controversy surrounding the Davis case and Lockette’s subsequent decision to grant Johnson a stay of execution. But even if new DNA testing comes back negative, he said, it wouldn’t prove Johnson’s innocence.

For death penalty foes, Johnson’s stay is a heartening victory following the disappointment of Davis’ death. But it’s also a sobering reminder that opposing capital punishment with the argument of reasonable doubt requires defending people who may be guilty of heinous crimes.