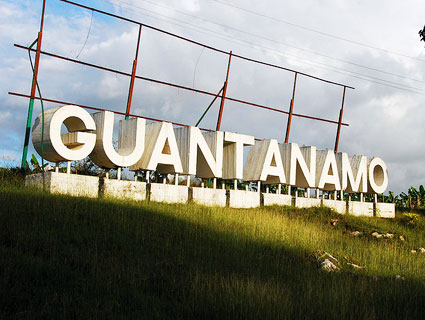 Defenders of the detention provisions in the defense funding bill currently under debate in Congress are arguing that they do not authorize the indefinite military detention of American citizens. They’re saying the Supreme Court already did that.

“There is no bar to this nation’s holding one of its own citizens as an enemy combatant,” Sen. Carl Levin (D-Mich.) said during his floor speech defending the detention provisions Tuesday. “That’s not me, that’s not Sen. Graham, that’s not Sen. McCain. That’s the Supreme Court of the United States recently.”

Levin was referring to 2004’s Hamdi v. Rumsfeld case, in which the Supreme Court ruled that Yaser Esam Hamdi, a US national captured during the 2001 invasion of Afghanistan, could be held in military detention but not without habeas review.

That case, however, involved an actual battlefield in an actual war. The current version of the defense funding bill—formally known as the National Defense Authorization Act, or NDAA—goes further. It says the military can detain anyone deemed to be “a part of” or deemed to have “substantially supported” Al Qaeda, the Taliban, or “associated forces.” Terror suspects would not have to be on an actual battlefield or fighting in an actual war, as Hamdi was, to be detained by the military. And although Americans, unlike foreigners, are not required to be held in military detention if apprehended on American soil, the NDAA affirms that they can be, based on the 2001 Authorization to Use Military Force (AUMF) against Al Qaeda. (Levin said in his floor speech that despite its threat to veto the bill, the administration had approved that language.)

Benjamin Wittes, a Brookings Institution scholar who thinks the government should have the option to put Americans in domestic military detention under some circumstances, described Hamdi’s capture as “a very traditional battlefield-type capture where they guy happens to be US citizen. It’s very different from yanking someone out of the criminal-justice system or picking someone up at O’Hare airport.”

Crucially, the Hamdi case didn’t actually settle the issue of whether or not a US citizen apprehended domestically by law enforcement could be put into military detention. It’s happened before: Twice, individuals captured in the United States were detained by the military. In both cases, one involving a citizen and the other a legal resident, the detainees were ultimately shunted into the criminal system for fear that the Supreme Court would find military detention unconstitutional. Perhaps more significantly, both examples, Jose Padilla and Ali Saleh al-Marri, occurred years ago, and until Obama took office there was no effort by Congress to force the executive branch to use the military to detain people suspected of terrorism.

The shift toward using military detention authority means that Americans could someday be subject to the standards of proof crafted by Guantanamo Bay legal cases, standards that over the years have shifted substantially in the government’s favor. Early on, detainees were winning many of their cases because the evidence the government was using to hold them was often based on intelligence reports judges found unreliable. So the courts simply shifted the standards so that judges would have to assume the government’s evidence was true.

The Gitmo legal record shows “the government needs very little evidence to hold someone indefinitely,” says Jonathan Hafetz, an associate professor at the Seton Hall School of Law who represented Marri, the US resident who spent years in military detention before ultimately being convicted of material support for terrorism in the civilian justice system. The cases have turned “judicial review into a virtual rubber stamp where judges can’t meaningfully question the truth or accuracy of documents that the government submits.”

Because the government avoided Supreme Court review by putting Padilla and Marri back in the criminal-justice system, it’s not clear to what level the Gitmo standards would apply in hypothetical future habeas cases. “If you put an American citizen under military detention and the standard for habeas review is the law of war, then a lot of that DC Circuit law probably does apply,” Wittes says.

The Bush-Obama presumption in favor of criminal prosecution for terror suspects captured domestically means that it’s unlikely that the issue will come up soon. But a future president could conceivably detain an American citizen indefinitely on suspicion of terrorism instead of bringing them to trial, which means Americans could someday enjoy the same quality of justice as Gitmo detainees.

On Tuesday, the Senate voted down amendments that sought to strip out the detainee provisions. The House and Senate still need to reconcile their respective versions of the NDAA, but it’s likely the provisions will survive. “It’s hard to believe [the bill] is going to get better,” says ACLU Legislative Counsel Chris Anders.

The risk of losing before the Supreme Court may still discourage presidents from trying to detain Americans indefinitely. Railing against the detention provisions on Tuesday, Sen. Rand Paul (R-Ky.) quoted from Justice Antonin Scalia’s dissent in the Hamdi case, saying, “The very core of liberty secured by our Anglo-Saxon system of separated powers has been freedom from indefinite imprisonment at the will of the Executive.” A president who prefers to detain citizens indefinitely rather than bother with trials could face significant pushback even from conservative members of the high court.

“Even if you imagine a Newt Gingrich executive branch, they’ll be in a different place ideologically, but their tactical judgment about what the law will or will not support may not be profoundly different,” Wittes says.

Then, of course, there’s the reality that core Al Qaeda has been decimated and the United States is looking to withdraw from its more than decades-long commitment in Afghanistan. Perhaps not today or next year, but sooner or later, Wittes says, a habeas case will come forward that makes a credible argument that “hostilities” have ceased and military detention is no longer justified.

“When the only thread left to the [2001 Authorization for the Use of Military Force] is some group in Yemen that didn’t exist on 9/11, that’s going to be a hard argument to make,” Wittes says. “I might support it, but I wouldn’t want to be the government lawyer who has to go before the Supreme Court and argue that.”