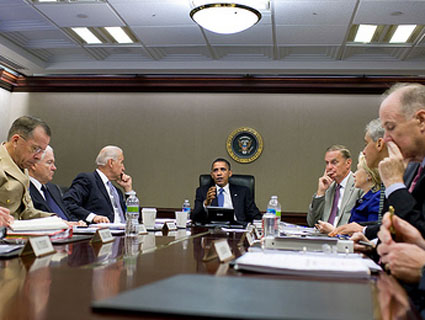 The American Civil Liberties Union is suing the Obama administration over the deaths of three American citizens who were killed by US drone strikes in Yemen last year. Anwar al-Awlaki and Samir Khan were killed in the same attack in early September; Awlaki’s 16 year-old son, Abdulrahman al-Awlaki, was killed in a separate strike later that month.

“This suit is an effort to enforce the Constitution’s most fundamental guarantee, the guarantee of due process,” said Jamil Jaffer, deputy legal director of the ACLU, on a conference call with reporters. “Ten years ago extrajudicial killing by the United States was exceptional. Now it’s routine.”

The ACLU’s lawsuit isn’t about drones, even though drones were used in all three killings in question. Instead, it’s about targeted killings more broadly, including those carried out by drone strikes and those performed by elite American military units. The lawsuit contends that the United States government violated the constitutional rights of the three men by killing them without court review outside of an active war zone.

The Obama administration has contended that it has the authority to target suspected members of Al Qaeda outside the conflict in Afghanistan and Pakistan, particularly if a given individual poses what it calls an “imminent threat.” Although the US government had tagged Anwar al-Awlaki as a terrorist through controlled disclosures to the public and the media, Khan was merely suspected of being a propagandist, and the government has never alleged that Awlaki’s teenage son was involved in terrorism. Moreover, the ACLU argues, the US government has “defined the term ‘imminent’ so broadly as to negate its meaning.”

The ACLU is suing on behalf of two relatives of the men killed in the attacks: Nasser al-Awlaki, who is Anwar al-Awlaki’s father and Abdulrahman al-Awlaki’s grandfather; and Sarah Khan, who is Samir Khan’s mother. This isn’t the first time the ACLU has sued on Nasser al-Awlaki’s behalf. In 2010, the ACLU sued to prevent Anwar al-Awlaki from being killed. The lawsuit was dismissed by United States District Court Judge John Bates, partially on the grounds that the targeting of suspected terrorists was a “political question” that was inappropriate for a court to evaluate. (Bates also said that Awlaki had chosen not to avail himself of the US justice system, and so his father had no standing to sue on his behalf). The Obama administration has another option to block the ACLU’s lawsuit: It could invoke the state secrets doctrine, a sort of “get out of court free” card Obama has used in numerous national security cases despite previously promising to use that power sparingly. Despite numerous public acknowledgments of the targeted killing program, it could once again claim the program is too secret to be discussed in court.

But the ACLU’s lawyers believe their chances for getting a hearing are better this time, both because their clients, in losing their loved ones, suffered a concrete injury that can’t be denied, and because of the more frank public acknowledgements by administration officials of the targeted killing program’s existence. The latter, the ACLU argues, will make it more difficult for the government to contend the matter is a state secret.

There have also been revelations since Awlaki’s death that could bolster the government’s assessment of him as a terrorist. Chief among them are the recently released documents from Osama bin Laden’s compound, showing communication between Al Qaeda and its Yemeni affiliate over Awlaki’s role. But Jaffer says the ACLU takes those accusations seriously—it just wants the government to prove them in court.

“We want the government to introduce whatever evidence relied on to a court, and a court can decide whether that evidence was sufficient to justify the government’s actions,” Jaffer said. “That’s all really our clients are asking for. They’re asking for what they see as accountability.”