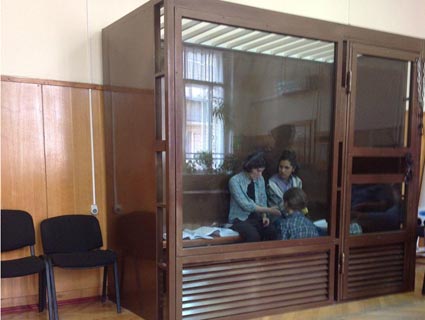 So, maybe Pussy Riot’s guilty verdicts and grim sentences to two years in a penal colony didn’t come as too much of a surprise. It’s kind of what you get when the court bars multiple defense witnesses from testifying, enlists experts to diagnose all three women with personality disorders, and considers the testimonies of those deeply offended by the band’s “punk prayer” at Christ the Savior Cathedral after having only watched the event on Youtube. (For full background on the case, see our explainer.)

Alisa Obraztsova, a legal assistant on the defense team and Pussy Riot’s copyright and intellectual property lawyer, told Mother Jones that the riot grrrls might have gotten harsher punishments if it weren’t for the international attention on their case. The question that remains is whether Pussy Riot’s lawyers will be able to appeal the conviction, and in a relevant time frame. Even worse, according to the defense team, is that the grueling penal colony conditions could result in injury or death for the three women.

The first step for Pussy Riot’s defense was to file an appeal to a higher court, as their lawyers did on Monday. Obraztsova says that this could result in the sentence being softened, maybe by half a year. Vladimir Lukin, Russia’s Putin-appointed human rights ombudsman, has also publicly supported a decreased sentence. “We expect [a lesser sentence], but we are not sure,” Obraztsova said. “You can never be sure in Russia. This is a totally political case.”

“You do not ask pardon from someone who is doing this to your family, who is trying to break you,” Obraztsova says. “They tell him to go to hell.”

Obraztsova refers to the case as “telephone justice”—the kind in which decisions, irrespective of criminal code, are phoned in from Putin and his elite.

“There’s every ground to believe that the ruling (two year sentence) as well as the following decisions are not reached in the courthouse,” notes Maria Lipman, a Russia expert at the Carnegie Endowment for International Peace’s Moscow Center. Lipman cites another recent political trial, the second of oil magnate Mikhail Khodorkovsky, as one in which the ruling was delivered by higher-ups. In 2011, the judge’s assistant on the case admitted in an interview that Khodorkovsky’s guilty verdict wasn’t written by the judge.

“From levying exorbitant fines to signing laws that crack down on public meetings, there’s a large wave of repression going on in Russia,” says Alex Edwards, a spokesperson for Amnesty International USA, which has demanded the immediate relase of the Pussy Riot prisoners. “It doesn’t start and it doesn’t stop with Pussy Riot,” he added. “It’s a systematic crackdown.”

If Putin and his courts don’t see it fit to lessen the women’s sentence (they’ve already served six months of it in pre-trial detention), the defense team has vowed to take their case to the European Court of Human Rights. But the problem there is two-fold: First, it could take two to three years for the case even to be heard—well after the women will have been shipped to penal colonies. Secondly, it’s probable, notes Lipman, that the ECHR would just fine the Kremlin for the offense while the women remained in prison.

As for what happens in the penal colonies, Pussy Riot’s lawyers feel it could be a matter of life or death. Obraztsova explains that it’s likely the women would be split up among several prison camps, where they would stay in 100-person barracks with women convicted for murder, or other dangerous felonies. Then there’s religious and anti-Pussy Riot fervor to consider. “A man was raped [with] a bottle of champagne in a police office,” Obraztsova says, referencing the gruesome case from March in which a 52-year-old man died after being detained by Russian police. “What can we expect from the penal colony?”

Still, Pussy Riot won’t be asking for Putin’s pardon, and the defense team told Mother Jones that even Nadia Tolokonnikova’s four-year-old daughter, Gera, doesn’t cede to the Russian president; when asked who put her mother behind bars, she answers “Putin.” When asked who Putin is, she replies simply that he’s “a bad man.”

Obraztsova puts it another way. “You do not ask pardon from someone who is doing this to your family, who is trying to break you,” she says. “They tell him to go to hell.”