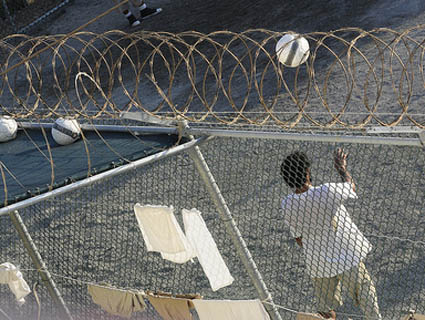 A detainee at the Guantanamo Bay detention facility tosses a soccer ball. <a href="http://www.flickr.com/photos/jtfgtmo/5497741300/sizes/m/in/photostream/" target="_blank">Flickr/JTFGitmo</a>

Judge Brett Kavanaugh, a George W. Bush appointee, wrote for a three-judge DC Circuit panel that Hamdan could not be prosecuted for acts that were not crimes at the time they were committed. That’s because the Constitution prohibits Congress from passing laws ex post facto—after the fact. The government cannot make something a crime after you’ve already done it and then charge you for doing it. But that’s exactly what Congress seemed to do in 2006 when it made “material support for terrorism” a war crime and encouraged the military to prosecute Gitmo detainees—who had already been imprisoned for years—for committing it.

“This is a massive blow to the legitimacy of the military commissions system,” says Zachary Katznelson, a senior attorney at the ACLU. The commissions “have been trying people for years for something that isn’t even a war crime.”

It’s not just a few Gitmo detainees who have faced these charges. Every single detainee at Gitmo who has been convicted by military commission has been at some point charged with material support for terrorism. Now a federal judge—one appointed by Bush!—says that’s all bogus. And it’s not just material support charges that could be affected. Conspiracy charges, which were also not a war crime under United States law before 2006, could be thrown out for similar reasons.

“The military commission system didn’t seem to take these concerns seriously” when defense attorneys brought them up during trials, says Daphne Eviatar, a senior counsel with Human Rights First. “This decision really undermines their standing now.”

All of this may not alter the lives of the convicted much. Hamdan has been free in Yemen since 2009, because his sentence—like others handed out by military commissions—was relatively light. Hamdan served five years of his five-and-a-half-year sentence at Gitmo, so he had little left by the time he was convicted. So the court’s decision doesn’t mean Hamdan will be going free: He’s already free.

Most of the rest of the people who were tried by military commission are either home free or in another country’s custody. In some cases, they face or were convicted of other charges that don’t have ex post facto problems. But the verdict in this case means that the most common option for prosecuting Gitmo detainees is no longer available.

Human rights and civil liberties advocates saw today’s ruling coming. They weren’t the only ones, though: In their testimony before Congress in 2009, David Kris, then the head of the National Security Division of the Department of Justice, and Jeh Johnson, the Pentagon’s top lawyer, warned that convictions for material support could someday be reversed by the courts. This was one of the reasons the administration argued that it was vital to keep open the option of prosecuting Gitmo detainees in federal trials. Material support and conspiracy have long been crimes in federal courts, and bringing those charges there would not create the kinds of constitutional ex post facto issues that caused the panel to strike down Hamdan’s conviction.

“Not only did the president sign the legislation knowing there wasn’t a legal basis for this charge,” Katznelson says, “but his administration then prosecuted people for something that was not a war crime at all.”

But just because the military commissions have become less viable doesn’t mean detainees will end up in federal courts. Congress has prohibited the transfer of Gitmo prisoners to US soil, and “enemy combatants” can technically be held for the duration of hostilities. Since the war on terror is one without end, future presidents might simply refuse to try terrorists at all.