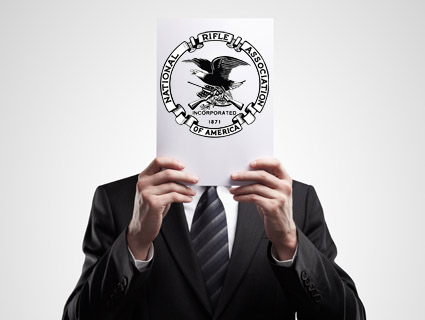 Update, 12/18/12: The NRA has issued an official press release about the Newtown shooting, dispatching it via Twitter and Facebook after four days of social media silence. “We were shocked, saddened and heartbroken by the news of the horrific and senseless murders in Newtown,” it reads. The short statement makes no mention of specific gun laws or policies, though it states that “The NRA is prepared to offer meaningful contributions to help make sure this never happens again.” Read the full statement here.

As the country has reeled from the Newtown massacre, the National Rifle Association has been noticeably silent. Its Twitter account has been mute since Friday morning, and its Facebook page has been taken down. Its online radio program has been saying guns aren’t to blame, and “sources close to the issue” tell Fox News that the NRA will speak up after “a proper period for mourning.” But as of this writing, the gun rights advocacy group has yet to issue any official statement on the worst grade school shooting in US history.

Virtual silence immediately following mass shootings is the NRA’s usual M.O. In 2011, following the shooting that wounded Arizona Rep. Gabrielle Giffords, NRA president Wayne LaPierre boasted at the Conservative Political Action Conference, “Ladies and gentlemen, in the days after the tragic events in Tucson, the NRA refused to respond to the media’s demands for reaction.” (Italics and bold in original transcript.) Earlier, the group acknowledged its code of silence in a leaked 2006 brochure, though it also noted that it eventually might lift its self-imposed gag rule:

But the NRA remains reluctant to join in the national discussion that immediately follows many mass shootings. We searched for the NRA’s public statements following the 62 mass shootings of the past 30 years and we found few formal responses to most of them—that includes press releases or mentions on the sites of either the NRA or its lobbying wing, the NRA-Institute for Legislative Action.

When the NRA does acknowledge a shooting, it almost always does so a few days after the event. It often skips past expressing sympathy to make a political point: Gun control is definitely not the answer to preventing the next tragedy. Or as one NRA official put it shortly after a gunman killed 6 people and wounded 29 in a Stockton, California, schoolyard in 1989, “You’re not going to be able to legislate crazy people sane.”

Since the advent of the internet, the NRA often does not make such statements in its own name, instead citing or linking to third parties who have expressed similar sentiments. More recent examples of the NRA’s record of trying to say as little as possible about mass shootings:

December 26, 2000, shooting in Wakefield, Massachusetts, kills 7: On December 28, the NRA acknowledged the attack with a link on its website to a Boston Globe editorial titled “What Can We Do After Wakefield?” The piece, by oft-discredited pro-gun academic John Lott, author of More Guns, Less Crime, advocates for right-to-carry laws. The next day, the NRA sent out a fax alert to subscribers, mentioning nothing about the Wakefield massacre.

February 5, 2001, shooting in Melrose Park, Illinois, kills 5 and injures 4: The day of the shooting, the NRA posted one sentence on its website, linking to a supporting document: “For years NRA has said that the best way to fight illegal gun use is to enforce the laws already on the books, not pass more laws. Now, the Progressive Policy Institute agrees. Read About It: www.ppionline.org“

October 2, 2006, shooting in Lancaster County, Pennsylvania, kills 6 and injures 5: Three days afterward, the NRA homepage linked to an article about the attack titled “Legislation, No Solution.” The massacre, it said, “will embolden handgun-control advocates to seek passage of stricter gun-control measures. And they would solve nothing. Read About It: Pittsburgh Tribune-Review”

April 16, 2007, shooting at Virginia Tech kills 33 and injures 23: The NRA did feature a formal acknowledgement of the attack on its site on April 20, urging Americans not to engage in “political discussions or public policy debates”:

The National Rifle Association joins the entire country in expressing our deepest condolences to the families of Virginia Tech, and to all who have been affected by this horrible tragedy. Our thoughts and prayers go out to the families and friends who lost loved ones to this senseless act. This is a time for people to grieve, to mourn, and to heal. This is not a time for political discussions or public policy debates. Virginia Governor Tim Kaine has declared today a day of mourning; as a Virginia based organization, we respect and abide by this declaration. We will participate in this discussion at an appropriate time. In the interim, our thoughts and prayers continue to be with the victims, their families, and the entire Virginia Tech community. 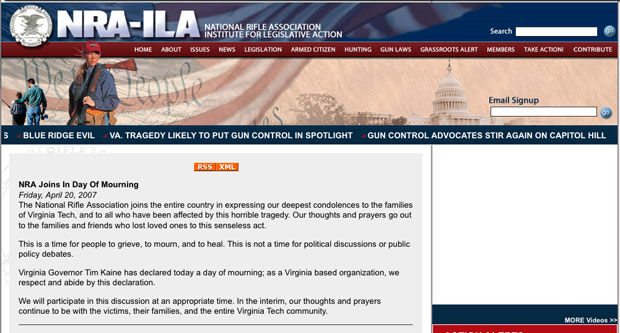 But two days before that, it linked to an article from the Baltimore Sun titled “Va Tragedy Likely to Put Gun Control in the Spotlight.” On April 19, the organization linked to “A Gun Ban and the Gunman,” an article in the Washington Times, reprinting the first paragraph of the piece.

February 14, 2008, shooting at Northern Illinois University kills 6 and injures 21: The day after the attack, the NRA linked to a Baltimore Sun article about Obama’s calls for more gun control, quoting: “Following yesterday’s tragic shooting at Northern Illinois University, Sen. Obama said he believes in the Second Amendment, but that there is plenty of room for added gun regulations.”

April 3, 2009, shooting in Binghamton, New York, kills 14 and injures 4: Five days after the attack, the NRA featured a link to a Gallup poll showing that support for handgun bans were at all-time lows. The data was from a poll taken one week before the Binghamton shooting.

November 5, 2009, shooting at Fort Hood, Texas, kills 13 and injures 30: Five days later, the NRA’s mentioned the attack by linking to a piece in the Daily Sound about “the wishful but mistaken notion that such incidents can be prevented by laws prohibiting or strictly restricting access to firearms.”

January 8, 2011, shooting in Tucson, Arizona, kills 6 and injures 13: The NRA acknowledged this tragedy quickly, issuing a statement on the day of the attack: “Our thoughts and prayers are with the victims of this senseless tragedy, including Representative Gabrielle Giffords, and their families during this difficult time. We join the rest of the country in praying for the quick recovery of those injured.”

Three days later, the NRA linked to a Politico piece about possible gun control legislation in the wake of the tragedy, quoting this line: “One of the fiercest gun control advocates in Congress, Rep. Carolyn McCarthy (D-N.Y.), pounced on the shooting massacre in Tucson, Ariz., Sunday, promising to introduce legislation as soon as Monday.”

April 2, 2012, shooting in Oakland, California, kills 7 and injures 3: Four days after the attack, the NRA linked, once again, to an article stating that gun laws are not the answer. It quoted a line from article saying that “short of banning semi automatic weapons, it’s unlikely that any new laws could prevent someone from going on a shooting spree with the weapon that authorities say One L. Goh used to kill students at Oikos University.”

July 20, 2012, shooting in Aurora, Colorado, kills 12 and injures 58: An untimely tweet the morning of the shooting read “Good morning, shooters. Happy Friday! Weekend plans?” and was deleted within hours. Three days later, there was a leaked letter asking for donations to help protect “the future of [our] Second Amendment rights.” Four days after the attack, the NRA provided a pithily introduced link to a Wall Street Journal piece about left-wing politicians “complaining about the absence of a debate over gun control.”