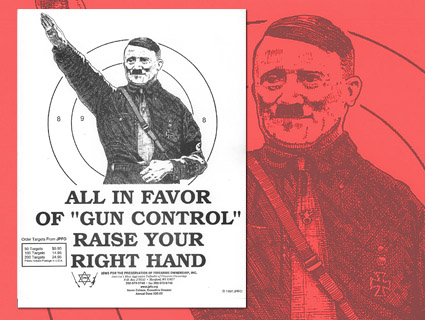 Jews for the Preservation of Firearms Ownership

Near the outset of his rant on Piers Morgan Tonight on Monday, conspiracy peddler Alex Jones warned that the Second Amendment is all that stands between democracy and dictatorship. “Hitler took the guns, Stalin took the guns, Mao took the guns, Fidel Castro took the guns, Hugo Chávez took the guns, and I’m here to tell you, 1776 will commence again if you try to take our firearms!” he screamed.

Of course, attempts to equate gun control with fascism are bogus. But the “Hitler took the guns” argument has long had a prominent and fairly effective role in America’s gun control debate despite its obvious reductionism.

Its origins can be traced back to at least the early 1980s, when opponents of a Chicago proposal to ban handguns invoked it in the largely Jewish suburb of Skokie by “reminding village residents that the Nazis disarmed the Jews as a preliminary to sending them to the gas chambers,” the Chicago Tribune reported. In 1989, a new pro-gun group called Jews for the Preservation of Firearms Ownership began arguing that the 1968 federal gun control bill once favored by the NRA’s old guard “was lifted, almost in its entirety, from Nazi legislation.” (That false claim is still being repeated.)

In 1994, JPFO founder Aaron Zelman implored the NRA’s board to seize on the alleged Nazi connection:

Some of you may even have figured out that unless the NRA changes its strategy, the law abiding firearm owner in America will go the way of the Jews in Nazi occupied Europe: extermination…The choice is yours; you can turn your back on a failed strategy—one of compromise with evil-doers—and attack the concept of “gun control” by exposing the Nazi roots of “gun-control” in America. Or, you can persist in a failed strategy, and accept your own extinction.

Whether or not the NRA was influenced by his advice, that same year its CEO, Wayne LaPierre, published Guns, Crime, and Freedom, in which he claimed, “In Germany, firearm registration helped lead to the holocaust,” leaving citizens “defenseless against tyranny and the wanton slaughter of a whole segment of its population.” The following year, President George H.W. Bush famously resigned from the NRA after LaPierre attacked federal law enforcement officials as “jack-booted government thugs” who wore “Nazi bucket helmets and black storm trooper uniforms.” More recently, Stephen Halbrook, a lawyer who has represented the NRA, argued (PDF) that “if the Nazi experience teaches anything, it teaches that totalitarian governments will attempt to disarm their subjects so as to extinguish any ability to resist crimes against humanity.”

So did Hitler and the Nazis really take away Germans’ guns, making the Holocaust unavoidable? This argument is superficially true at best, as University of Chicago law professor Bernard Harcourt explained in a 2004 paper (PDF) on Nazi Germany’s impact on the American culture wars. As World War I drew to a close, the new Weimar Republic government banned nearly all private gun ownership to comply with the Treaty of Versailles and mandated that all guns and ammunition “be surrendered immediately.” The law was loosened in 1928, and gun permits were granted to citizens “of undoubted reliability” (in the law’s words) but not “persons who are itinerant like Gypsies.” In 1938, under Nazi rule, gun laws became significantly more relaxed. Rifle and shotgun possession were deregulated, and gun access for hunters, Nazi Party members, and government officials was expanded. The legal age to own a gun was lowered. Jews, however, were prohibited from owning firearms and other dangerous weapons.

“But guns didn’t play a particularly important part in any event,” says Robert Spitzer, who chairs SUNY-Cortland’s political science department and has extensively researched gun control politics. Gun ownership in Germany after World War I, even among Nazi Party members, was never widespread enough for a serious civilian resistance to the Nazis to have been anything more than a Tarantino revenge fantasy. If Jews had been better armed, Spitzer says, it would only have hastened their demise. Gun policy “wasn’t the defining moment that marked the beginning of the end for Jewish people in Germany. It was because they were persecuted, were deprived of all of their rights, and they were a minority group.”

Gun enthusiasts often mention that the Soviet Union restricted access to guns in 1929 after Joseph Stalin rose to power. But to suggest that a better armed Russian populace would have overthrown the Bolsheviks is also too simplistic, says Spitzer. “To answer the question of the relationship between guns and the revolutions in those nations is to study the comparative politics and comparative history of those nations,” he explains. “It takes some analysis to break this down and explain it, and that’s often not amenable to a sound bite or a headline.”

(Ironically, pro-gun white nationalists have tried to stand the “Hitler took the guns” idea on its head by arguing that he was in fact a staunch supporter of the right to bear arms—for Aryans. William Pierce, author of the race war fantasy The Turner Diaries, made this claim in his book Gun Control in Germany, 1928-1945. So who’s behind the effort to paint Hitler as anti-gun? The Jews, of course.)

Even if President Obama suddenly unleashes his inner totalitarian, there’s no chance he could successfully round up all of America’s 300 million-plus firearms. Such an idea is practically and politically impossible. A tough assault weapons ban like one Democrats are currently proposing would affect just a fraction of the total privately owned firearms in the country. Yet by invoking the historical threat of disarmament, Spitzer says, “the gun lobby has worked to throw a scare into gun owners in order to rally them to the side of the NRA.”