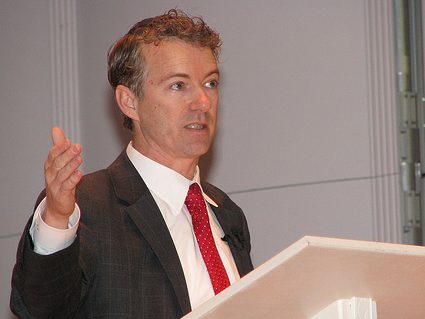 It hasn’t made as many headlines as his marathon filibuster over drones, but Monday Senator Rand Paul (R-Ky.) told Fox Business host Neil Cavuto Monday that he supports trying Boston Marathon bombing suspect Dzhokhar Tsarnaev in court rather than holding him as an “enemy combatant.”

Here’s the transcript of their exchange (emphasis added):

PAUL: Well, you know, I want to congratulate law enforcement for getting and capturing these terrorists, first of all. But, what we do with them, you know. I think we can still preserve the Bill of Rights. I see no reason why our Constitution is not strong enough to convict this young man with a jury trial, with the Bill of Rights, we do it to horrible people all of the time, rapists and murderers. They get lawyers, they get trials with juries. And we seem to be able to do a pretty good job of justice. So I think we can do it through our court system.

CAVUTO: All right, so the whole, enemy combatant thing is a moot point for you. The fact is that an American citizen will be served American justice. And will get — he will get, if guilty, his just deserts.

PAUL: You know, when I talk to our young soldiers, and my wife and I have been working, we’re trying to build houses for some of these wounded veterans, who’ve really sacrificed their bodies literally, they tell me they are fighting for the Constitution and the Bill of Rights, and I believe them. And I know that that’s what they represent, I think they are disheartened to think, oh, we’re going to just tell people, oh, no jury trial any more. So I think it is something worth standing up for.

Law enforcement has yet to turn up any evidence of an operational connection between the Tsarnaev brothers Al Qaeda or its affiliates. Without such evidence, holding Tsarnaev as an “enemy combatant” is probably illegal. Paul’s support for the Obama administration’s decision to try Dzhokhar in criminal court without holding him in military detention first has not received much attention. That may be because Paul also suggested that immigration from Chechnya should be restricted in the wake of the marathon attacks.

The Tsarnaev brothers are of Chechen descent. But they emigrated to the US from Dagestan, not Chechnya. Tamerlan was 15 and Dzhokhar was eight. Presumably they hadn’t yet begun planning to bomb the Boston Marathon.