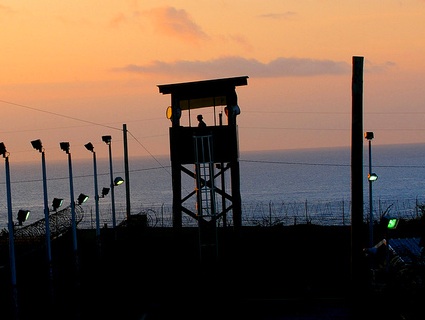 Obaydullah, a detainee at Gitmo who was first captured in Afghanistan in 2002, filed a declaration in federal court in March that was unsealed and posted by the national security blog Lawfare on Friday. The declaration goes into striking detail about the circumstances that Obaydullah (who goes by one name) says provoked the hunger strike at the detention camp, which began in February and now involves 100 out of the 166 remaining detainees, according to the Pentagon’s count.

“In response to the dehumanizing searches, the confiscation of our personal items, and the desecration of the holy Quran, I and the men at Camp 6 and some at Camp 5, waged a hunger strike on Feburary 6 2013,” the declaration reads. “But our strike continues because conditions have gotten worse, not better, and there is no hope that we will ever leave here.”

The declaration corroborates the descriptions of Gitmo defense attorneys who have said that although the hunger strike began as a response to what the detainees saw as desecration of their holy books, it has now grown into a protest of the Obama administration’s policy of indefinite detention. According to Obaydullah, conditions had improved until the February “shake down” that he says provoked the strike. In response, Obaydullah says, the guards began to interrupt detainees’ prayers and moved detainees to more restrictive conditions. Access to recreational facilities was limited and, according to Obaydullah, camp authorities deliberately began to lower the temperature in Camp 6 to the point of “freezing.” “All of these actions showed me and the other prisoners that camp authorities were treating us the way we were treated in the years under President Bush,” Obaydullah writes.

In his declaration, Obaydullah hints at what the detainees would require to end the three-month protest. “We plan to remain on strike until we are treated with dignity, the guards stop trying to enforce old rules, our prayer and religion are respected, and our Qurans are handled with the care and sanctity required.”

Obaydullah has been challenging his detention for years with little success. Although he maintains he was never a fighter for Al Qaeda or the Taliban, a federal judge concluded in 2010 that the evidence against him “unmistakably supports the conclusion that it is more likely than not that petitioner Obaydullah was in fact a member of an al Qaeda bomb cell committed to the destruction of U.S. and Allied forces,” and was therefore lawfully detainable.

“I am losing all hope because I have been imprisoned at Guantanamo for almost 11 years now and I still do not know my fate,” Obaydullah concludes.