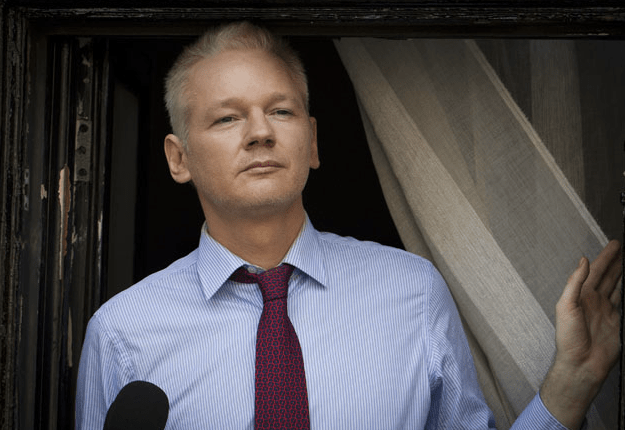 WikiLeaks founder Julian Assange, who has spent the last year holed up inside the Ecuadorian embassy in London seeking asylum from Swedish and American authorities, held a press call today to discuss former NSA contractor Edward Snowden and the charges leveled against Bradley Manning, who is currently on trial for allegedly leaking thousands of diplomatic cables and other classified documents to WikiLeaks. On the call, Assange said that his organization is continuing to consider documents for release and gave new details about his contact with Snowden.

“Wikileaks is always in the process of preparing its next publication,” Assange told Mother Jones. “We [have] pending publications, but as a matter of policy, we can’t discuss them.” The organization’s releases have been sporadic since Assange took refuge in the embassy last June. Its last big document dump was in April of this year, when it disclosed diplomatic cables from the 1970s.

Assange, who is Australian, spoke from inside the embassy, where he is staying until he has assurance that British authorities won’t extradite him. He is wanted by Sweden for questioning in relation to allegations that he sexually assaulted two women, but even if that investigation is dropped, he says that he won’t leave the building because he fears the United States will extradite him in connection with the leak of the cables and other secret documents. He is currently under investigation by the US Attorney for the Eastern District of Virginia and his lawyer has said it’s likely the Justice Department has already prepared a sealed indictment against Assange. “My primary concern is dealing with the US case,” Assange said.

The WikiLeaks founder again expressed his support for Snowden, who is facing extradition worries of his own in Hong Kong. He said that WikiLeaks is in touch with Snowden’s legal team to help him potentially gain asylum in Iceland, but did not provide detail on whether he had personal contact with Snowden. When Mother Jones asked Assange whether Wikileaks had any contact with Snowden before he made his first disclosures to the press, Assange said, “We never discuss issues potentially related to sourcing.” (Glenn Greenwald of The Guardian,  who broke Snowden’s disclosures, told BuzzFeed that “I’m not aware that WikiLeaks has any substantive involvement at all with Snowden, though I know they’ve previously offered to help.”)

Although Assange acknowledged that he is hindered in doing WikiLeaks work because he cannot personally meet with sources, he said that if US authorities are attempting “place me in a position where I cannot investigate national security, that’s a clear failure. Because there is nothing else to do but work.”

Shortly after the call wrapped up, the WikiLeaks’ Twitter account sent a widely criticized tweet suggesting that the tragic death yesterday of journalist Michael Hastings “has a very serious non-public complication” and noted the group would “have more details later.”