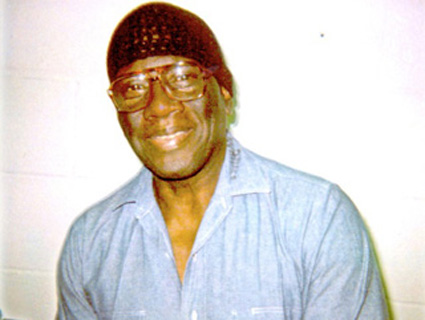 Update: Herman Wallace was freed on Tuesday evening. His legal team issued a statement saying the “four decades which Mr. Wallace spent in solitary confinement conditions will be the subject of litigation which will continue even after Mr. Wallace passes away. It is Mr. Wallace’s hope that this litigation will help ensure that others, including his lifelong friend and fellow ‘Angola 3’ member, Albert Woodfox, do not continue to suffer such cruel and unusual confinement even after Mr. Wallace is gone.”

Earlier today, the chief judge of the United States District Court for the Middle District of Louisiana overturned the murder conviction of the dying prisoner Herman Wallace, ordering that the state “immediately release Mr. Wallace from custody.” But the state is appealing the decision. Wallace is one of two members of the so-called Angola 3 who, along with Albert Woodfox, has been held in solitary confinement for more than 41 years. This summer, Wallace was diagnosed with terminal liver cancer. He was taken off chemotherapy in September, and currently resides in a prison medical facility. The state’s reluctance to set free an aging and gravely ill prisoner highlights some of the issues covered by James Ridgeway in his award-winning story “The Other Death Sentence,” an article that chronicles the graying of America’s prison population, and the associated costs, both moral and financial.

Here’s some background on the Angola 3, from Ridgeway’s own extensive coverage of their saga.

Convicted of armed robbery, the men were sent to Angola in 1971. Wallace and Woodfox were Black Panthers, and they began organizing to improve conditions at the prison, which did not win them points with the prison administration. In 1972 they were prosecuted and convicted for the murder of a prison guard named Brent Miller. They have been fighting the conviction ever since, pointing out (PDF) that one of the eyewitnesses was legally blind and the other was a known prison snitch who was rewarded for his testimony.

After the murder, the two—along with a third inmate named Robert King—were put in solitary, where they have remained ever since. (King was released in 2001, after 29 years in solitary, when his conviction in a separate prison murder was overturned.) Several years ago, Wallace and Woodfox were transferred to separate prisons, but they are still held in solitary.

The Times Picayune reports that Baton Rouge District Attorney’s office is now in the process of filing an appeal with the Fifth Circuit Court, and will also be asking for a stay of Herman’s release. Maria Hinds, a personal advocate who’s been closely involved in Wallace’s case since 2008, says that for now, the warden at the Elayn Hunt Correctional Facility, where Wallace is being held, has refused to release him, and that Wallace’s lawyers have filed a motion for contempt of court against the warden for violating a court order.