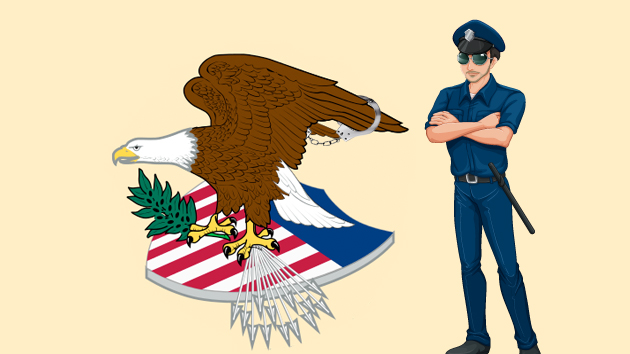 Federal prosecutors, judges, and other officials at the Justice Department committed over 650 acts of professional misconduct in a recent 12-year period, according to a new report published by a DC-based watchdog group, the Project On Government Oversight. POGO investigators came up with the number after reviewing documents put out by the Department of Justice’s Office of Professional Responsibility (OPR). According to one little-noticed OPR document published last year, a DOJ attorney failed to disclose a “close personal relationship” with the defendant in a case he was prosecuting, in which he negotiated a plea agreement to release the defendant on bond. An immigration judge also made “disparaging remarks” about foreign nationals. POGO contends that this number is only the tip of the iceberg and OPR needs to release more information about this misconduct to the public.

“The bottom line is we just don’t know how well the Justice Department investigates and disciplines its own attorneys for misconduct when it occurs,” says Nick Schwellenbach, a contributor to POGO. “The amount and types of misconduct DOJ’s own investigators conclude has happened suggests more [information] should be public than is already, including naming names of offending prosecutors that commit serious misconduct.”

OPR is responsible for investigating ethics complaints at the Justice Department, but the office reports directly to the attorney general. POGO argues that this insular system might not be sufficient to provide effective oversight of prosecutor wrongdoing. Last year, for example, two federal judges issued court orders complaining that DOJ attorneys had misled them about the full scale of the NSA’s surveillance activities—but OPR was never aware of the complaints and didn’t investigate them even though a former OPR attorney said that they should have triggered an inquiry, according to USA Today.

Between fiscal year 2002 and FY2013, of the more than 650 documented cases of DOJ employee misconduct, 400 were characterized as “reckless” or “intentional” by OPR. In OPR’s latest report, from FY2012, the office received over 1,000 complaints and other correspondence about Justice Department employees (over half of these complaints came from incarcerated individuals) and opened 123 inquiries and investigations.

In one case from 2012, a Justice Department attorney falsely told a court that the government didn’t have evidence that a key witness suffered from an ongoing mental-health disorder—when the prosecutor did have that evidence, according to OPR. The attorney was suspended for two weeks and the state bar was notified. In another case, an immigration judge presiding over a case where a father and his daughter were fighting removal from the United States was found by OPR to have “engaged in professional misconduct by acting in reckless disregard of his obligation to appear to be fair and impartial” and to have made biased statements against immigrants. The judge was suspended for 30 days.

OPR isn’t responsible for disciplining employees; that’s up to others in the Justice Department. OPR also no longer publicly names Justice Department employees found to be conducting misconduct, although it did so for a brief period during the Clinton presidency. In 2010, the American Bar Association passed a resolution asking the Obama administration to release more information about Justice Department investigations, potentially including names, but so far, not much has changed.

“The department takes all allegations of attorney misconduct seriously, and that is why the Office of Professional Responsibility thoroughly reviews each case and refers its findings of misconduct to relevant state bar associations when the rules of the state bar are implicated,” says a Justice Department spokeswoman. “OPR also regularly provides detailed information on the resolution of complaints to the defense attorneys, judges, and others who send allegations of misconduct to the department.”

A bill proposed on Thursday by Sens. Mike Lee (R-Utah) and Jon Tester (D-Mont.) would overhaul how misconduct is investigated at the Justice Department. Right now, only OPR is allowed to look into ethics complaints, instead of the Justice Department’s Office of Inspector General, which is widely considered to be more independent. The senators’ bill would move that authority to the IG’s office. Sen. Lisa Murkowski (R-Alaska), who supports the bill, says: “When Americans pledge to abide by ‘liberty and justice for all,’ that does not mean that those pursuing justice can creatively apply different standards or break the rules to get convictions—it means that in America everyone is held equally accountable.”