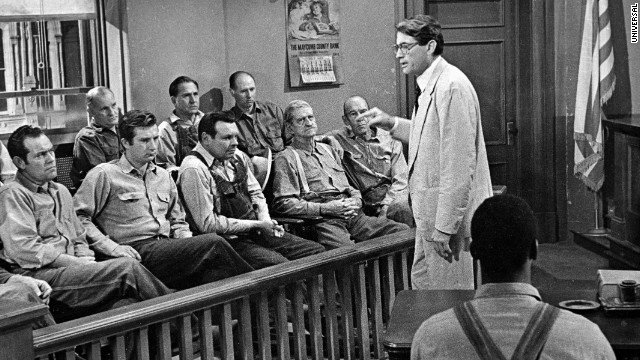 Atticus Finch (Gregory Peck) addresses jurors in the 1962 film "To Kill a Mockingbird."

Update (5/23/2017): The Supreme Court has reversed the conviction of Timothy Foster on the basis that prosecutors violated the Constitution by removing black people from the jury on the basis of their race. There is “no doubt” this will mean Foster will get a new trial, said his lawyer, Stephen Bright, according to ABC News—but the decision did nothing to rein in the ability of lawyers to reject potential jurors without reason. Read on.

The exclusion of black people from juries is a hot topic as the United States Supreme Court considers the case of Timothy Foster, a black man charged with murdering an elderly white woman in Georgia some three decades ago. In 1987, Foster was convicted and sentenced to death by an all-white jury, after prosecution lawyers used their so-called peremptory strikes to disqualify all the blacks in the jury pool, citing “race-neutral” reasons.

Up until this point in the case, the courts had accepted those alternative rationales. But the prosecutors’ notes from jury selection, which were finally revealed thanks to a Public Records Act request, suggest a deliberate exclusion strategy. On the list of prospective jurors, the black names were circled, highlighted in green, and marked with a “B.” They were also ranked, as an investigator for the prosecution noted in an affidavit, in case “it comes down to having to pick one of the black jurors.” Ouch. (On Tuesday, Mother Jones reporter Stephanie Mencimer tracked down one of those rejected jurors, who recalled the prosecutors treating her “like I was a criminal.”)

“Isn’t this as clear a Batson violation as this court is likely to see?” asked Justice Elena Kagan.

“We have an arsenal of smoking guns,” Foster’s lawyer, the famed capital defender Stephen Bright, told the high court during Monday’s oral arguments. Several justices seemed to agree. “Isn’t this as clear a Batson violation as this court is likely to see?” asked Justice Elena Kagan.

She was referring to the 1986 case of Batson vs. Kentucky, in which the Supreme Court explicitly prohibited the striking of jurors based on ethnicity. But the legal profession has long looked the other way as prosecutors come to court armed with what, in the Foster case, was described as a “laundry list” of alternative explanations for a juror’s removal. Things like, “Oh, this juror is about the defendant’s age,” or “They grew up in the same part of the city.”

Among other things, Foster’s lead prosecutor noted that several of the prospective black jurors he dismissed hadn’t made sufficient eye contact when he questioned them. In any case, it’s not hard to invent reasonable-sounding explanations for striking a juror, and therein lies the problem. Only when you run the numbers does the racist intent comes into sharp focus.

“I knew I would vote for the death penalty because that’s what that n—– deserved.”

For a little context, it’s helpful to look at portions of Marc Bookman’s recent essay about Kenneth Fults, another Georgia death row inmate. One of the jurors in that case, a white man, later made the following statement under oath: “That nigger got just what should have happened. Once he pled guilty, I knew I would vote for the death penalty because that’s what that nigger deserved.” The white lawyer assigned to defend Fults also used the N-word with abandon. But none of this was enough to convince skeptical courts to grant Fults a resentencing. In his essay, Bookman explains how the legal system is rigged against black defendants, and why, without an arsenal of smoking guns, arguing racial discrimination is usually a losing game:

Consider one of the most famous examples, the 1987 Supreme Court case of McCleskey v. Kemp, in which lawyers for Warren McCleskey, a black man sentenced to death for killing a white police officer, presented statistics from more than 2,000 Georgia murder cases. The data demonstrated a clear bias against black defendants whose victims were white: When both killer and victim were black, only 1 percent of the cases resulted in a death sentence. When the killer was black and the victim white, 22 percent were sentenced to death—more than seven times the rate for when the races were reversed.

The Supreme Court was less than impressed with all of this. Justice Lewis Powell, in a 5-4 majority opinion he would later call his greatest regret on the bench, wrote that McCleskey could not prove that “the decisionmakers in his case acted with discriminatory purpose.” In short, evidence of systemic racial bias had no relevance in individual cases…

Georgia executed McCleskey in 1991, but the McCleskey rationale—which the New York Times labeled the “impossible burden” of proving that racial animus motivated any particular prosecutor, judge, or jury—has been used by dozens of courts to reject statistical claims of discrimination in capital cases, even though today’s numbers are not much better.

Bookman goes on to detail the sordid history of jury stacking:

The phrase “legal lynching” first appeared in the New York Times during the infamous 1931 Scottsboro Boys trials, in which nine black youths were charged with raping two white women in Alabama. Their lack of counsel, coupled with the explicit exclusion of black jurors, led the Supreme Court to intercede twice and reverse convictions.

It’s hard to read those opinions today without feeling a sense of horror. Within two weeks of the alleged crime, eight of the nine young men had been sentenced to death in three separate trials by the same jury. Although there was no shortage of black men in Scottsboro County who were legally eligible to serve on juries, there was no record of any of them ever serving on one. Perhaps most remarkably, none of the defendants had a lawyer appointed to represent him until the morning of trial. In 2013, more than 80 years after the arrests, the Alabama Board of Pardons and Paroles posthumously pardoned the three Scottsboro Boys whose convictions still stood.

“Question them at length,” said one prosecutor, referring to people of color. “Mark something down that you can articulate at a later time.”

We have not come nearly as far from these outrages as you might think. People of color are still dramatically underrepresented (PDF) on juries and grand juries, even though excluding people based on race is illegal and undermines “public confidence in our system of justice,” as the Supreme Court put it in 1986. Prospective black jurors are routinely dismissed at higher rates than whites. The law simply requires some rationale other than skin color.

“Question them at length,” a prominent Philadelphia prosecutor suggested to his protégés after the Supreme Court banned race as a reason for striking jurors. “Mark something down that you can articulate at a later time.” For instance, a lawyer might say, “Well, the woman had a kid about the same age as the defendant, and I thought she’d be sympathetic to him.”

In 2005, a former prosecutor in Texas revealed that her superiors had instructed her that if she wanted to strike a black juror, she should falsely claim she’d seen the person sleeping. This was just a dressed-up version of the Dallas prosecution training manual from 1963, which directed assistant district attorneys to “not take Jews, Negroes, Dagos, Mexicans, or a member of any minority race on a jury, no matter how rich or how well educated.”

The 1969 edition of the manual, used into the 1980s, promoted a more subtle brand of stereotyping, noting that it was “not advisable to select potential jurors with multiple gold chains around their necks.” But it hardly mattered: Overt, covert, or in between—the result was the same.

Virtually every state with a death penalty has dealt with accusations that black jurors have been improperly kept off juries. During the 1992 death penalty trial of a defendant named George Williams, for example, a California prosecutor dismissed the first five black women in the jury box. “Sometimes you get a feel for a person,” he explained, “that you just know that they can’t impose it based upon the nature of the way that they say something.” The judge went even further, noting that “black women are very reluctant to impose the death penalty; they find it very difficult.” In 2013, the California Supreme Court ruled that these jury strikes were not race-based, and deemed the judge’s statement “isolated.” Williams remains on death row.

After North Carolina passed its Racial Justice Act, a 2009 law that let inmates challenge death sentences based on racial bias, a state court determined that prosecutors were dismissing black jurors at twice the rate of other jurors. The probability of this being a race-neutral fluke, according to two professors from Michigan State University, was less than 1 in 10 trillion; even the state’s expert agreed that the disparity was statistically significant. Based on these numbers, the court vacated the death sentences of three inmates and resentenced each to life without parole. Six months later, the state legislature repealed the Racial Justice Act.

Finally, in an earlier essay on the case of Andre Thomas, a death row inmate with a long and bizarre history of mental illness, Bookman described yet another ploy to keep black people off Texas juries:

It’s called the “shuffle.” The pool of potential jurors, known as a venire, are seated in a room, and with no information other than what the jurors look like, either side can request that they be shuffled—reseated in a different order.

The order of the venire, it turns out, is crucial to the jury’s final makeup. That’s because each juror is questioned in turn, and if lawyers from either side want to exercise their right to disqualify someone, they have to do it then and there. If it looks like one side is striking a juror based on race—which is not allowed—the other side can mount a challenge. Hence the shuffle: At Andre’s trial, there were initially six African Americans seated in the first two rows. After the shuffle—which proceeded without any objection by the defense—there were no blacks in the first five rows. Ultimately, two black jurors were questioned and dismissed. When all was said and done, the entire jury—not to mention the judge and all of the lawyers—was white.