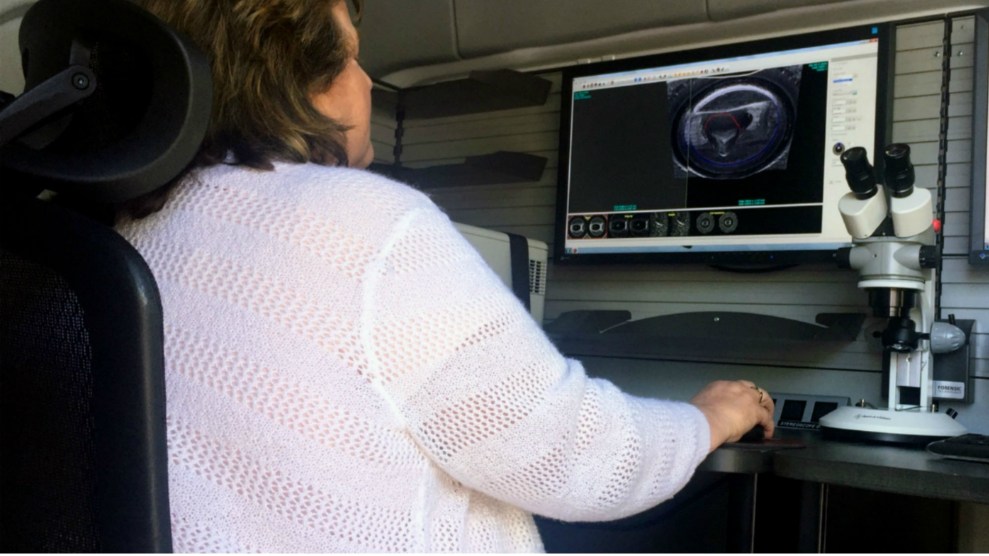 A woman works inside the ATF's new gun forensics mobile lab, which is currently in Chicago.Associated Press

Six months after President Donald Trump threatened to send the feds to Chicago to “fix the horrible ‘carnage’ going on,” city officials announced on Monday that they’ve been getting some more federal crime-fighting aid in the form of a mobile firearms forensics van that’s been roaming the streets for three weeks. The van, which the Bureau of Alcohol, Tobacco, Firearms and Explosives (ATF) first rolled out in May, makes it possible to immediately test guns and shell casings at a crime scene. It’s aimed at “helping police departments around the country,” an ATF spokesperson told Mother Jones.

The new van is a high-tech upgrade to the ATF’s gun tracing system: It can match a gun on the spot, while sending evidence to a crime lab can take at least 24 hours, often longer. Even as the agency is asked to trace more than 350,000 weapons a year, the gun lobby has successfully managed to keep the agency in the last century—often relying on analog systems to track down guns used in crimes. As an agency spokesman told Mother Jones‘ Bryan Schatz when he visited the National Tracing Center in West Virginia, most people have no idea how laborious the actual process is:

“I was watching one of the acronym shows, NCIS or CSI or one of those, and there’s a body on the ground and a gun in the bushes,” Ray recounts. “The detective runs up to it, pulls out his iPhone, and takes a picture of the gun, and it instantly pops up on a screen who bought the gun, where he lives, what his criminal history is. Yeah, that’s exactly how it works. ‘Go get the microfilm! We gotta get this guy cuffed!’ Six hours later—zzzzzzzzz.”

The plan is for the ATF van to move from city to city and spend a few weeks in each one. Before coming to Chicago, the van spent May in Baltimore, another city Trump has chided in the past. Despite the tech upgrade, in the three weeks that the van has spent in the Windy City, it hasn’t helped police make any arrests, according to the department Superintendent Eddie Johnson. Nonetheless, Sen. Dick Durbin (D-Ill.) says that he’s “glad the feds have arrived” and that the city “needs the van full time.” Durbin, Johnson, and Mayor Rahm Emanuel plan on asking Attorney General Jeff Sessions to keep the van in Chicago until Labor Day. The ATF has not yet responded to a request for more information on the factors it is using to determine which cities the van will assist.