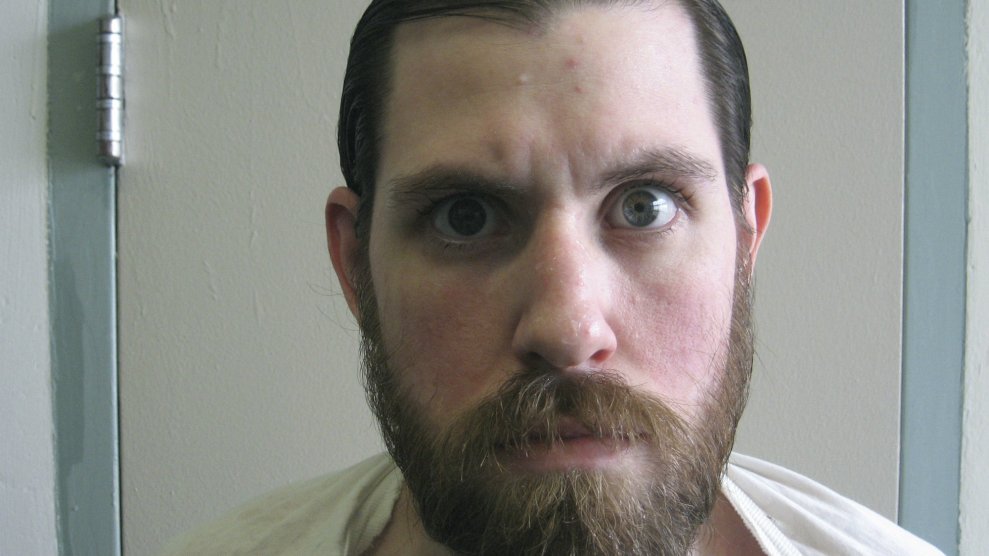 William Morva in an undated photo.Virginia Department of Corrections via AP

Update, July, 6, 2017: Virginia Gov. Terry McAuliffe has decided not to halt the execution of William Morva. He said that the inmate was “given a fair trial and that the jury heard substantial evidence about his mental health as they prepared to sentence him.” Morva is scheduled to die tonight at 9:00 p.m. at the Greenville Correction Center in Jarrett, Virginia.

Morva’s lawyers released a statement expressing disappointment in McAuliffe’s decision. “William Morva’s July 6 execution will not make our community safer,” Dawn Davison, senior staff attorney at the Virginia Capital Representation Resource Center said in an emailed statement. “He is a person with a severe mental illness whose problematic and criminal behaviors were driven by his chronic psychotic disorder.” Because of his delusions, Davison says, Morva will not fully understand why he is being put to death, but, “he will understand it to be the natural but horrific ending to a campaign of persecution that has been waged against him for fifteen years.”

The state of Virginia plans to execute William Morva on July 6 for the 2006 murders of Derrick McFarland and Eric Sutphin. Morva suffers from a mental illness that causes him to have delusions, but the jury was unaware of that fact before sentencing him to death. Over the last nine years, all of Morva’s appeals were declined. Now, his fate rests in the hands of Virginia Gov. Terry McAuliffe.

In 2006, Morva was held at the Montgomery County Jail in Christiansburg, Virginia, for a series of robbery attempts in 2005. During his detention, his family requested, but did not successfully obtain, mental health treatments for the 24-four-year old. According to Morva’s lawyers, he had been suffering from delusions since at least 2002, including beliefs that the George W. Bush administration and local law enforcement wanted to jail him unjustly in order kill him.

Believing he was in imminent danger, Morva told guards that he had fallen and injured himself. He was then transported to Montgomery Regional Hospital, where he assaulted the deputy guarding him and took his gun. He shot and killed Derrick McFarland, a hospital security guard, and escaped. The next day he was spotted at a walking trail near Virginia Tech in Blacksburg, and Eric Sutphin, a corporal with the Montgomery County Sheriff’s Office responded to the report. Morva shot and killed him with the stolen gun. Later that day, Morva was found in a nearby ditch, arrested, and charged with capital murder.

Dawn Davison, a staff attorney at the Virginia Capital Representation Resource Center and co-counsel for Morva, argues there was not a thorough investigation into Morva’s background before the 2008 trial. A psychiatrist had spoken with Morva’s mother and sister, but “neither had daily contact [with him] and could describe what was going on with him on a daily basis,” Davison says.

Morva was subsequently misdiagnosed with schizotypal personality disorder, a condition characterized by “odd beliefs.” The prosecution told jurors that this disorder was untreatable. “It was described as a problematic attitude,” says Davison. “Jurors were told that personality disorders weren’t amenable to treatment, that this is the way he is.”

At the trial, Morva exhibited strange behavior. When he was sentenced to death, he told the court that he was renouncing his given name, because it was a slave name, and that his new name was Nemo. According to the Richmond Times-Dispatch, Morva also went on a rant:

“You people, your whole society, you go and sleep at night with smiles on your faces because you get away with all the evil stuff you do,” he said. “You may kill me, that’s guaranteed. There are others like me, and some day they’re going to get together, and they’re going to sweep over your civilization and wipe these smiles off your faces.”

In 2014, six years after his trial ended, Morva was reevaluated and diagnosed with delusional disorder, an illness that causes him to believe in false realities but can be treated with anti-psychotics. Two weeks later Davison and her co-counsel sent a letter to the prison where Morva was incarcerated, telling officials that they needed to treat him for his illness.

“We recently obtained a copy of his medical record,” Davison says. “There’s no record of anyone treating him.” Davison believes that prison officials simply don’t think he’s mentally ill.

At Sussex I State Prison, where Morva is currently being held, the prison psychiatrist, Dr. Alan Arikian, never evaluated or treated Morva. In a 1997 case, Dr. Arikian told a federal judge that he would refuse to treat Percy Walton, another inmate on death row, if Walton were found to be schizophrenic because he considered his expression of the illness to be “better explained by an individual who has, over a period of five or six years, just begun to understand what is going on and what’s happening and doesn’t really like what is happening.” In 2008, former Gov. Tim Kaine commuted Walton’s sentence to life in prison without parole after deciding that Walton’s mental illness precluded him from understanding what was happening to him.

Morva’s lawyers hope that Gov. McAuliffe will also choose life without parole for their client. In February, the US Supreme Court declined to review his case, leaving clemency from the governor their last chance to spare Morva’s life. Davison notes the two most common reasons for clemency are questions about innocence or severe mental illness. But having a mental illness doesn’t automatically exempt an inmate from execution. According to a forthcoming book by University of North Carolina professor Frank Baumgartner, 43 percent of those executed between 2000 and 2015 had been diagnosed with a mental illness at some point. In order to be spared, inmates must demonstrate that their mental capacity is so diminished they are incapable of telling right from wrong.

Davison says Morva was once a “very kind, compassionate, and quirky kid” who was involved in social justice issues. “When mental illness set it, it was a total perversion of who he was,” she explains. “The most important thing people need to know is that William would never have done these things if he wasn’t mentally ill.”

McAuliffe, a Roman Catholic who opposes the death penalty, has presided over executions and granted clemency to inmates. He also supported a law that shrouds the state’s execution process in secrecy. McAuliffe did not intervene in the executions of Alfredo Prieto in 2015, and Ricky Gray in January. In April, he commuted the death sentence of Ivan Teleguz, a man convicted of a murder-for-hire of his former girlfriend. Since his conviction, two key witnesses recanted their testimony, which his attorneys said called his guilty conviction into question. Teleguz has maintained his innocence. After reviewing more than 6,000 pages of documents, McAuliffe announced that Teleguz would serve life without the possibility of parole, saying that he believed the defendant was guilty but that the trial was “terribly flawed and unfair.”

Since Virginia governors can’t serve consecutive terms, McAuliffe is not up for reelection. Instead Democrat Ralph Northam and Republican Ed Gillespie will face off in November to replace him. Neither candidate wanted to directly comment on the decision facing McAuliffe.

A spokesperson for Gillespie said the former Republican National Committee chairman would be cautious in deciding a case like Morva’s. “Considering a pardon or clemency petition for a capital sentence is one of the most solemn responsibilities afforded the governor,” David Abrams told Mother Jones in an emailed statement. “As governor, Ed would thoughtfully consider each petition on a case-by-case basis, including mental capacity as a factor.”

Northam expressed faith in McAuliffe. “I am certain that the governor will go through the process of reviewing the case with his counsel,” he says, “and coming to a just and fair decision.”