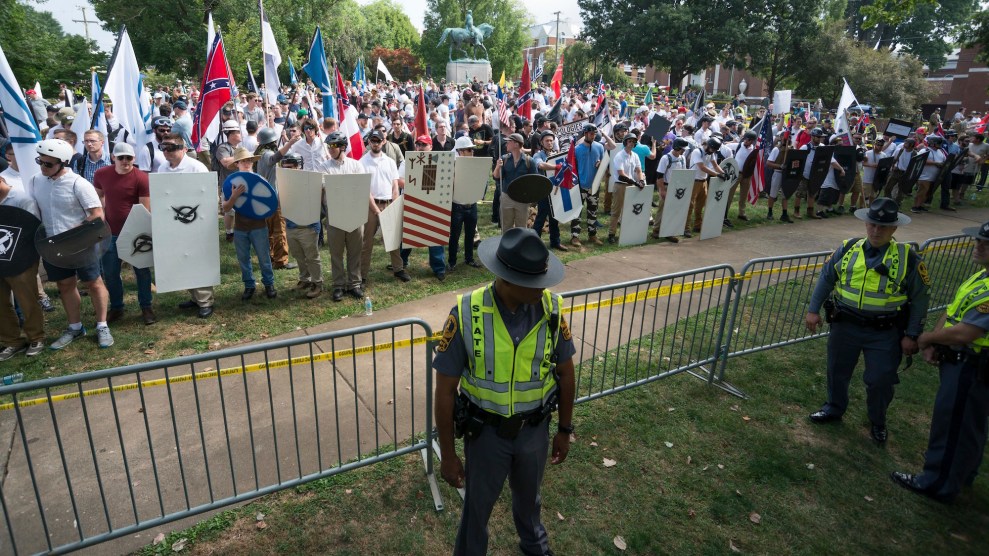 On Monday, Texas A&M University canceled a “White Lives Matter” rally planned for early September, citing reasons related to student safety. In a press release to promote it, a former student and one of the rally’s organizers linked the event to the violence in Charlottesville, Virginia, this past weekend, writing, “TODAY CHARLOTTESVILLE TOMORROW TEXAS A&M.” The event was also set to feature a speech by white nationalist and “alt-right” figurehead Richard Spencer, who was a prominent presence in Charlottesville. While it’s still possible it will happen, Texas A&M campus police, who’d only been alerted to the plans last week, are still likely breathing a small sigh of relief.

The same can’t be said for many other police departments across the country. Looking at a lineup of right-wing events planned over the next few weeks—from a national “March on Google” on Friday to protest the sacking of sexist-memo author James Damore, to a “Patriot Prayer” rally in the San Francisco Bay Area later in August—local police departments are faced with a daunting and complicated task: devising plans to prevent upcoming demonstrations from devolving into the kind of mayhem seen in Virginia on Saturday, which ended with ended with at least 36 injured and three dead.

The Charlottesville police department has caught criticism from both sides of the political aisle after numerous reports and videos have showed officers not intervening while neo-Nazis and other white supremacists physically battled counter-protesters. “There are some basic tenets of risk management that just weren’t followed,” says Thomas Aveni, executive director of the Police Policy Studies Council, a police training and research group. “There were foreseeable risks, based on what was observable in other areas of the country—whenever there have been so-called right-wing groups organizing with advance notice, there have been counter-protesters.”

With more protests and counter-protests on the horizon, Mother Jones talked to policing experts and local police departments about how to handle demonstrations that spiral into violence—and how to prevent these kinds of skirmishes in the first place. Here are some of the tactics they identified:

Prior to Saturday’s “Unite the Right” event in Charlottesville’s Emancipation Park, city police worked with rally organizers to devise a plan in which the white supremacists would enter only one side of the park, chief Al Thomas said at a press conference on Monday. Left-wing protesters would be allowed on the other side, separated by barricades and a line of officers. That, according to the executive director of the Major Cities Chiefs Association, Darrel Stephens, is often the plan when departments expect both protesters and counter-protesters. Police typically allow opposing factions “within sight and sound of each other, but you normally try to keep enough distance between them that you reduce the potential for violence,” Stephens tells Mother Jones.

However, in practice on Saturday, law enforcement failed to stop the Unite the Right attendees from entering both sides of the park, while counter-protesters filled the surrounding streets—and that’s where many clashes took place. “We were hoping that the members of the ‘alt-right’ rally would cooperate,” Thomas laments. “Unfortunately, they did not follow the plan.”

While there are recent examples in which police have been successful in keeping opposing protesters separated, it doesn’t come without a cost. In Seattle, for instance, during a right-wing rally on Sunday, city police enforced such a division with pepper spray and shoulder-to-shoulder police lines—tactics that worked but, on the downside, elicited chants of “Cops and Klan, hand in hand.”

Departments also often try to barricade streets to prevent protesters from mixing with cars, Stephens adds, but still, that can be difficult: “Crowds don’t go where they’re supposed to go.”

After a separate Ku Klux Klan rally in Charlottesville last month, local anti-racist activists criticized the city police’s use of tear gas to break up protests, saying it was excessive—and this Saturday, perhaps as a result, the department avoided using the chemical agent. City police and state troopers instead used a police line to push protesters out from Emancipation Park.

That decision tracks with recent developments in Berkeley, California, where the police department began shifting away from using tear gas to control crowds after the chemical caused injury and mayhem during the city’s 2014 Black Lives Matter protests. In one incident, police used an estimated 50 tear gas grenades and “blast rounds” to clear an avenue. “Depending on the prevailing wind, people who aren’t breaking the law are exposed,” Berkeley PD Lieutenant Andrew Frankel tells Mother Jones. “We want to avoid that.”

When fighting broke out at pro-Trump events in Berkeley on March 4 and April 15, local police instead tried to “surgically remove” protesters who engaged in violence as they broke away from congested areas, rather than wading into the crowd to make arrests. “That’s never a pretty sight, and potentially we’re moving people who don’t want to be moved,” Frankel explains. Of course, that may mean not doing not much “removal” at all:

At the most recent Berkeley protest on April 15, police confiscated from protesters on both sides more traditional weapons—stun guns, shields, sticks, knives, mace, and bear spray—as well as objects they had turned into weapons, such as poles and Pepsi cans filled with concrete, according to the East Bay Express. Similarly, in Charlottesville, protesters were weaponizing flagpoles—”dowels two or three inches in diameter, four or five or six feet long,” Thomas says. One way to cut down on the kinds of objects that could be used to harm others would be for cities to pass ordinances limiting the kinds of objects that may be used to hoist protest signs and flags, Thomas says. As for the many militia members and others who showed up in Charlottesville openly carrying firearms, which is legal in Virginia, they have the potential to distract police trying to identify an active shooter, Thomas notes: “That’s an enormous problem for police.”

Charlottesville protesters on both sides showed up with helmets, shields, and masks. In comparison, the local Virginia police were far less prepared for a confrontation early in the day. Thomas initially deployed officers in their regular street uniforms, and they only donned riot gear after it became clear that the violence in the park was escalating, the chief said at Monday’s press briefing.

While police who show up to a protest in riot gear risk being accused of evoking confrontation—as was argued after the 2014 protests in Ferguson, Missouri—Aveni notes that police in Charlottesville should have had better protections in place. “It doesn’t necessarily have to be military equipment,” he says. “When police respond without riot shields, without helmets, without visors, when they respond in a way when they don’t have basic protective devices, they’re ill-equipped to intervene if they have to.” Even Democratic Gov. Terry McAuliffe commented to the New York Times that the many militia members in attendance had “better equipment” than law enforcement on the scene.

Local police in Mountain View, California, are bracing for the “March on Google” planned for this Friday and are taking steps to coordinate with the event organizers and the surrounding community, even though their plans might be at odds. “We are in communication with both Google and with the event planners to ensure the protest is a peaceful one,” Mountain View PD’s public relations coordinator, Katie Nelson, tells Mother Jones, declining to comment on specifics. Frankel says Berkeley PD also makes overtures to event organizers, attempting to glean information while expressing concern over the potential for protests to turn violent. Still, Frankel says, none of the organizers of major right-wing protests in Berkeley this year applied for a permit, which the department considers the first step in keeping such events secure. And of course, coordination between organizers and police only works if attendees—unlike the white supremacists flooding Emancipation Park on Saturday morning—follow instructions.

As police departments craft specific strategies for protests in the coming weeks, they’d do well to heed the lessons of Charlottesville—and to study their own department’s track records. “We keep current events at the front of our minds when we sit down and prepare,” Frankel says. “And we’ve learned lessons from each one of our own responses to our own protests.”