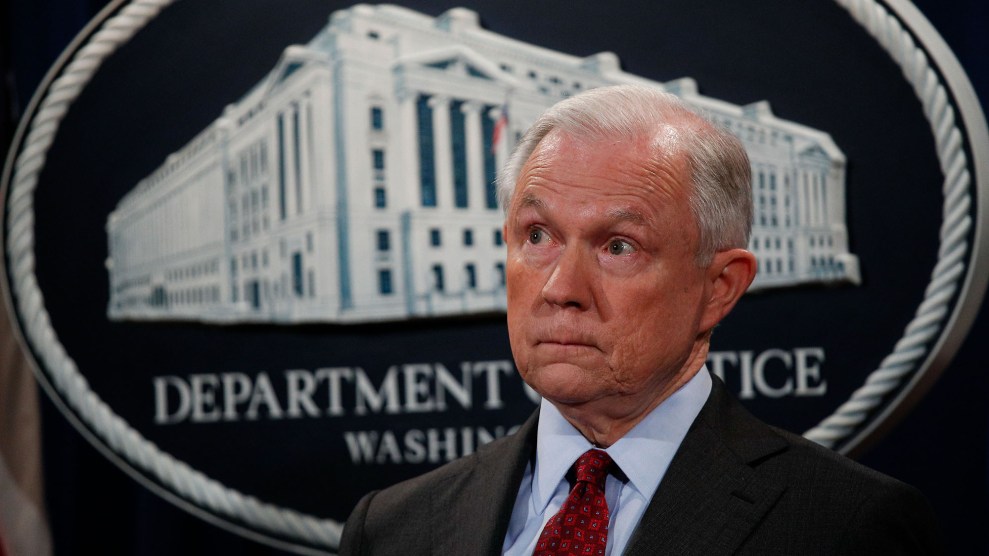 Attorney General Jeff Sessions has fallen out of favor with President Donald Trump, but that hasn’t stopped him from moving quickly to reshape the federal government’s approach to law enforcement. He has implemented new policies that will turn more offenses into federal crimes, confiscate suspects’ property, and crack down on sanctuary jurisdictions. The policies fit Sessions’ tough-on-crime attitude toward criminal justice—but he isn’t taking credit for them.

In announcing recent reforms, Sessions has said he is carrying out the recommendations of the Task Force on Crime Reduction and Public Safety. “I have been acting on the Task Force’s recommendations to set the policy of the [Justice] Department,” he said last week. But what exactly is this task force? It’s hard to say. The Justice Department has declined to disclose the task force’s membership, its meeting agendas, or its recommendations to the attorney general. The task force was slated to deliver a report to Sessions last week, but it has not been made public. Instead, the group supposedly behind some of the Trump administration’s most consequential policy moves remains an almost complete mystery.

On February 9, the day Sessions was sworn in as attorney general, Trump signed an executive order instructing Sessions to create a criminal justice task force, which he did on February 27. A press release noted that its members would include the directors of the Bureau of Alcohol, Tobacco, Firearms, and Explosives, the FBI, and the US Marshals Service and the administrator of the Drug Enforcement Administration. But no specific individuals were named. In June, the acting director of the DEA told US News and World Report that he was not on the task force and did not know if any of his subordinates were. (A spokeswoman for the Bureau of Alcohol, Tobacco, Firearms, and Explosives confirmed that the bureau’s acting director is on the task force. The FBI and US Marshals Service did not respond to a request for confirmation.)

In April, Sessions provided a few more details about the scope of the task force’s mission, in a memo stating that it would review a wide range of policies, from illegal immigration to marijuana. The memo also revealed two specific members on the task force: a career Justice Department attorney named Robyn Thiemann and a federal prosecutor from Tennessee named Steven Cook, whom Sessions had hired as assistant deputy attorney general to oversee criminal justice policy. Like most details about the task force, Thiemann and Cook’s official roles were not made clear, but subsequent reports have described them as co-chairs. The involvement of Cook, a proponent of harsh sentencing and a foe of criminal justice reform, was a signal that the group would take a hardline stance on law enforcement.

Cook, a former cop, was a vocal opponent of the latest bipartisan attempt to reduce mandatory minimum sentences and allow people serving long mandatory sentences to leave prison early. At a 2015 Senate hearing, Cook testified that the bill would cause violent crime to rise and that the Obama administration’s move away from mandatory minimums was making the country less safe. At the time, Cook was president of the National Association of Assistant US Attorneys, a conservative group that represents about a quarter of all assistant US attorneys and pushes for tougher criminal justice policies. Sessions, then a senator, approved of Cook’s testimony, reading portions of it as part of his own remarks. Sessions and Cook helped paint the bill as an assault on law enforcement, and despite significant bipartisan support, it never made it to the Senate floor.

Now Cook has a hand in guiding Sessions as he implements his law-and-order agenda. Shortly after becoming attorney general, Sessions hired Cook to focus on “violent crime strategy,” according to Cook. In March, shortly after the task force convened, Sessions sent a memo to US attorneys across the country, instructing them to seek federal gun charges that carry mandatory minimum sentences whenever possible. As a prosecutor, Cook has used federal gun charges to secure the lengthiest sentence possible in some cases, according to the Washington Post, as Sessions did when he was the US attorney for southern Alabama from 1981 to 1993. Last week, the Justice Department announced that charges of unlawful firearm possession have increased nearly 23 percent under Sessions’ new guidelines. The guidelines, the department said, had been recommended by the task force.

The Justice Department has declined to disclose the task force’s membership, its meeting agendas, or its recommendations.

One of Sessions’ most controversial reforms in recent weeks was also a task force recommendation. On July 19, Sessions announced that the department would increase its use of civil asset forfeiture, a law enforcement tool that allows police to permanently confiscate private property and cash from suspects, even those who are not charged with a crime. The policy is rife with abuse, and there is bipartisan support for limiting its use. But Sessions has long been a defender of the policy, dating back to his days as a federal prosecutor whose office regularly seized assets. “The policy and guidelines were formulated after extensive consultation with the Task Force on Crime Reduction and Public Safety,” the Justice Department stated in a press release announcing the policy.

A week later, the department announced an effort to force local law enforcement to cooperate with federal immigration authorities. The department would deny one type of federal grant to so-called sanctuary jurisdictions that withhold information about crime suspects from Immigration and Customs Enforcement. The next day, Sessions said in a statement that the task force “has provided me with recommendations on a rolling basis,” adding, “I have been acting on the Task Force’s recommendations to set the policy of the Department.” He did not specifically mention the previous day’s crackdown on sanctuary jurisdictions or any other specific policy.

In response to questions about who is on the task force and what recommendations have been made, a spokeswoman for the Justice Department sent Mother Jones that statement from Sessions, which did not address the task force’s membership or actions.

Despite the mystery surrounding it, the task force serves as a road map for what to expect from the Justice Department. In his April memo, Sessions said the task force would review current policy on issues including marijuana policy, hate crimes, immigration enforcement, and sex trafficking, raising concerns among advocates that further policy shifts could be in the works—although it’s hard to say in the absence of more information about the task force. “They have been operating in a black box, really,” Taylor West, deputy director of the National Cannabis Industry Association, told US News recently. “There has been no indication that there was an opening for any viewpoint other than those of whoever is on this committee.”