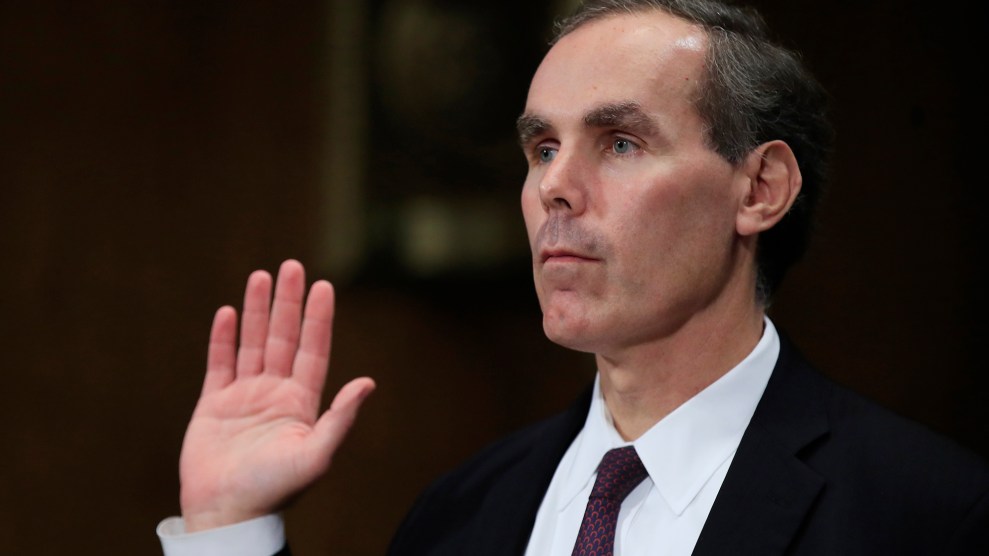 Eric Dreiband is sworn in during a Judiciary Committee hearing on September 6, 2017. Manuel Balce Ceneta/AP

As the Trump administration tries to recover from its tepid response to the racially charged violence in Charlottesville, the president’s pick to oversee the country’s civil rights enforcement faced a swirl of questions Wednesday about his commitment to equality under the law in a confirmation hearing before the Senate.

Eric Dreiband, President Donald Trump’s nominee to lead the Civil Rights Division at the Justice Department, has spent the past dozen years defending large corporations against civil rights claims brought by employees. His leap to the nomination for the top civil rights perch in the government has drawn criticism from civil rights groups. On Wednesday, it prompted questions from Senate Democrats about his views on some of the most pressing issues before the department, including voting rights, equal pay, and hate crimes.

Recent events loomed over the hearing. Dreiband faced questions about the violence in Charlottesville, which the division is investigating, and the rise of hate crimes. He was also asked about voting rights, amid moves by the Trump administration to crack down on voter fraud and potentially make it harder for many people, particularly minorities, to vote. Asked whether he agreed with Trump that millions of fraudulent ballots were cast in the 2016 elections, Dreiband answered simply that he was “unaware of the data about voter fraud in the United States.”

A former official in the George W. Bush administration, Dreiband has faced criticism from civil rights groups over his lack of experience in most of the division’s most important areas of focus: voting rights, education, housing, policing, and criminal justice generally.

“Eric Dreiband’s record shows he is the wrong person to lead the Civil Rights Division,” Vanita Gupta, who led the division during the last two years of the Obama administration, said Wednesday in a statement on Twitter. “The leader of that division must have an allegiance to civil rights, and not to the president or a political party.”

Dreiband faced repeated questions from Democrats about his views on equal pay for women. In 2008, Dreiband appeared before the Senate to testify in opposition to the Lilly Ledbetter Fair Pay Act, the first law President Barack Obama signed as president in early January 2009. “I do not believe that the bill would advance the public interest,” Dreiband testified at the time, adding that it would “create unanticipated and potentially ruinous liability” for employers.

On Wednesday, however, Dreiband insisted that he had not opposed the law but merely advocated for an even broader alternative—an explanation that was met with skepticism by several senators. When Sen. Richard Blumenthal (D-Conn.) asked whether Dreiband’s dire predictions about litigation had come to pass, Dreiband acknowledged they had not. “As a general matter, we have not seen the litigation that I would have expected,” he said. He also promised to “zealously enforce” the law.

Dreiband was part of the legal team that defended the University of North Carolina against a suit by the Obama Justice Department over implementation of the state’s notorious “bathroom bill” dictating which bathrooms transgender students could use. This week, LGBT rights groups wrote a letter to the Senate Judiciary Committee opposing Dreiband’s nomination, citing the North Carolina debate among other concerns. “The nomination of an attorney who volunteered to join a litigation team seeking to frustrate the Civil Rights Division’s efforts to defend transgender people from discrimination is insulting not only to the LGBT community but to the career men and women of the Division who valiantly litigated that case for many months,” the letter stated, adding, “His nomination embodies this Justice Department’s lack of commitment to defending the civil rights of LGBT people.” During the hearing, Dreiband declined to answer a question about whether Title IX, the federal statute barring sex discrimination in education, protects transgender students.

What worries civil rights advocates is his record after leaving the EEOC. In the years since, Dreiband has defended employers against the same kind of claims he brought while at the EEOC. In some cases, he opposed his former employer. While at the EEOC, Dreiband led a successful case against Abercrombie and Fitch, alleging that the company was violating the Civil Rights Act by favoring white male applicants over women and minorities. To resolve the suit, Abercrombie signed onto a consent decree prohibiting it from discriminating against women and minorities in hiring and promotions, and the company agreed to pay $50 million. Dreiband highlighted this case in his opening remarks on Wednesday. But in 2015, Dreiband was part of the legal team representing Abercrombie in an employment discrimination case in which he took essentially the opposite position. The retailer had declined to hire a Muslim teenager because her headscarf violated its “look” policy. The case went all the way to the Supreme Court, where Abercrombie lost.

In his confirmation hearing, Dreiband addressed the contradictions in his record by saying he had inhabited two very separate roles: one as a public servant, the other as an advocate for a client. “Having done both, I think it prepares me well to serve in public service as I once did,” he said.

Despite the importance of the Civil Rights Division, Dreiband’s hearing was sparsely attended by members of the committee, with few Republicans present. The same hearing also included two other executive-branch nominees and followed confirmation hearings for two nominees to federal circuit courts. “Unfortunately, senators who want to delve deeper into all the nominees’ troubling records had no help today from the Chair of the Senate Judiciary Committee, who scheduled so many nominees for a single hearing that comprehensive questioning of any one of them was impossible,” said Nan Aron, the president of the progressive Alliance for Justice, in a statement after the hearing.