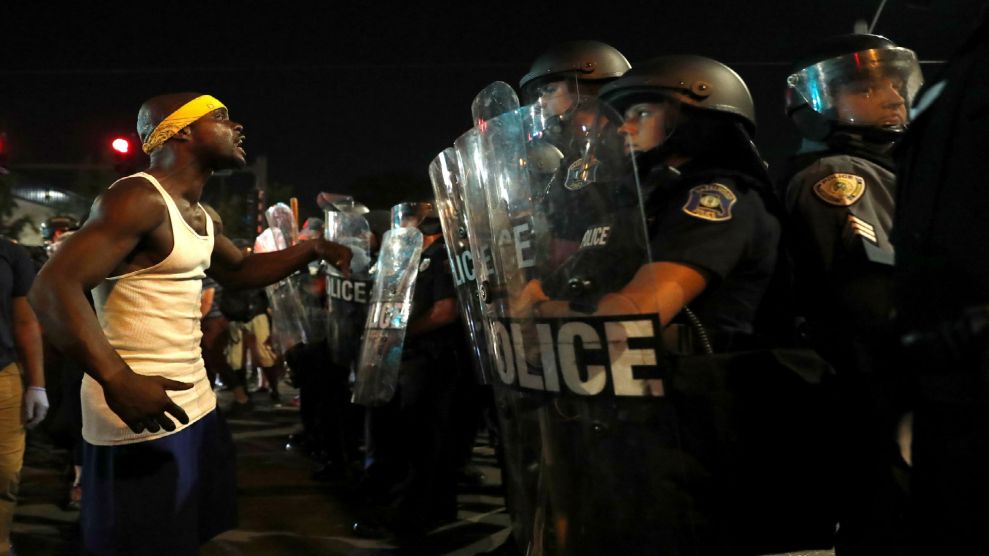 St. Louis is reeling after another chaotic weekend of demonstrations against police violence. Outraged protestors took to the streets beginning on Friday, after Jason Stockley, a former St. Louis police officer, was acquitted on criminal charges related to the death of Anthony Lamar Smith. The protests, which included clashes with police, broken windows, and overturned trashcans, continued well into Monday, according to CNN.

The case dated back to 2011, when Smith, a 24-year-old black man, was pursued by Stockley—a white police officer who is now 35 and lives in Texas—in a high speed car chase that ended with Stockley firing several shots, hitting Smith.  In 2016, the state of Missouri released a probable cause document outlining its case against Stockley. One line reads: “During the pursuit, the defendant [Stockley] is heard saying ‘going to kill this motherfucker, don’t you know it.'”

Though the incident happened in 2011, Stockley wasn’t charged until 2016 after what prosecutors vaguely described as “new evidence” came to their attention. But St. Louis Circuit Judge Wilson acquitted Stockley of first degree murder on Friday. Shortly after the verdict was announced, in a move that likely incensed many observers, Stockley spoke publicly to the St. Louis Post-Dispatch about the case, saying, “I did not murder Anthony Lamar Smith.” Then he added, somewhat paradoxically “It feels like a burden has been lifted, but the burden of having to kill someone never really lifts.”

What transpired in St Louis after the verdict is a scene that’s become all too familiar in cities across the country.

Protesters, mostly black, took to the streets to voice their outrage at yet another acquittal of a police officer charged with murdering a black citizen. In total, more than 80 people were arrested during the protests, with police officers at one point mocking the protesters by chanting, “Whose streets? Our streets!” while making those arrests.

Stockley’s acquittal may have been the match that lit the fuse in St. Louis, but the protests were the result of anger at a history of indignities suffered by black communities over generations. In 2014, after 18-year-old Michael Brown was shot and killed by ex-officer Darren Wilson in neighboring Ferguson and that city exploded in righteous anger, the U.S. Department of Justice tallied the Ferguson police department’s interactions with the local, majority black community over several years. One finding was that Ferguson generated the bulk of its revenue from municipal fines that unfairly targeted black residents.

But the most profound indignity of all has been the pace at which black people die at the hands of the police, and how seldom anyone is held accountable for those deaths. An investigation by the Guardian in 2015 found that young black men are nine times more likely to be killed by police than Americans of other races. But the Guardian also noted that convictions in such cases are rare.

Kristen Clarke, president and executive director of the Lawyers’ Committee for Civil Rights Under Law, made the case to CNN earlier in 2017 that institutional bias runs incredibly deep in the criminal justice system. “At the end of day, officers in their badge and uniform enjoy the benefit of the doubt,” Clarke said. “But none of that should distract us from the root cause of the crisis we face … [which is] the racial bias that infects many aspects of policing in our country.”

Racial bias can be seen in some of the other cases where officers have been charged in relation to the deaths of unarmed black men and acquitted in 2017:

Victim: Sam DuBose, age 43, was shot and killed while driving on the University of Cincinnati campus.

Victim: Terrance Crutcher, 40, was shot and killed after his vehicle stalled in Tulsa, Oklahoma.

Victim: Philando Castile, age 32, was shot and killed during a traffic stop in Minnesota. Video of his death went viral.

The outrage on display in St. Louis did not start—or end—with the acquittal of Stockley. St. Louis police chief Lawrence O’Toole said in a news conference on Monday that law enforcement had regained control. “The city of St. Louis is safe and the police owned tonight,” O’Toole said of the Sunday night protests. He said later: “We’re in control. This is our city, and we’re going to protect it.”