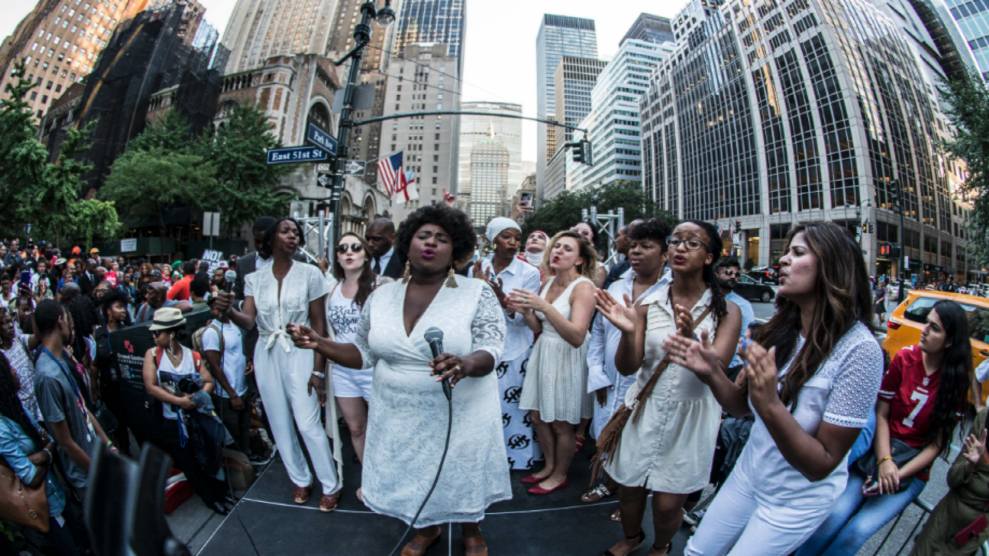 The NFL season continued over the weekend, and so did the attacks on its most infamous former employee: Colin Kaepernick.

This time, conservatives are clutching their pearls over Kaepernick’s $25,000 donation to a Chicago-based grassroots group called Assata’s Daughters. The gift, which Kaepernick disclosed on his website as part of his pledge to give $1 million from his jersey sales to “organizations working in oppressed communities,” will help support a Cop Watch program, a garden, a library, and a workshop for 50 local teenagers.

Assata Shakur, the organization’s namesake, is a former Black Panther Party member who was convicted and imprisoned on charges related to the 1973 shooting of a New Jersey state police trooper. Shakur has long maintained her innocence and, after escaping from prison in 1979, fled to Cuba. She is still listed on the FBI’s list of Most Wanted Terrorists.

The Washington Times first “broke” the news that Kaepernick made the donation back in April, the same month he retweeted a happy birthday message to Shakur. On Saturday, Breitbart published a post linking the months old donations to ongoing player activism, arguing that “the NFL is intensifying protests begun by someone who thinks donating to groups named after cop-killers is a good thing.”

But in certain leftist and radical circles, and particularly for black women, Shakur is considered a movement hero. To her supporters, she represents the political disenfranchisement of dozens of 1970’s-era black activists who were targeted by the government and imprisoned for their beliefs. Her autobiography has become a staple of black feminist theory.

Organizers affiliated with Black Lives Matter use her sayings to open and close protests and meetings.

And when President Trump tried to take a hard line with Cuba earlier this year, demanding that the country’s government return “fugitives from American justice,” activists revived a slogan Shakur sympathizers displayed during her early days on the run (“Assata is Welcome Here”), emblazoning it on t-shirts.

Kaepernick’s off field philanthropy is proving to be almost as frustrating to his white detractors as his on field protests. The outrage suggests conservatives are threatened by what might happen when black women are empowered to organize cop watches and engage in direct action. And especially when those black women take pride in outlaws like Shakur, who make a mockery of America’s criminal justice system. And especially especially black women who flex their political muscle: In 2015, Assata’s Daughter’s helped oust then-Cook County State’s Attorney Anita Alvarez after her office mishandled the case of Laquan McDonald, a black teenager who was shot 16 times by a Chicago police officer.

Kaepernick, who has gone unsigned by NFL teams this season and remains unemployed, is arguably more dangerous now than he was when he was facing down opposing defenses on the field. But this time, the danger isn’t just about what he can do. It’s about what the various movements he represents can do, too.