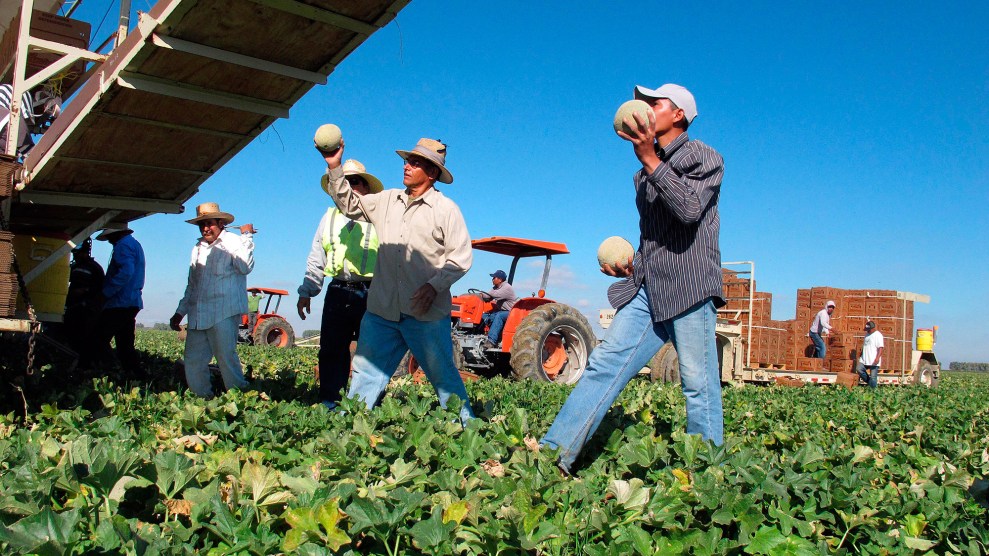 In April, the Trump Administration launched what it called the Victims of Immigration Crime Engagement (VOICE) hotline, with a stated mission to “provide proactive, timely, adequate, and professional services to victims of crimes committed by removable aliens.” But internal logs of calls to VOICE obtained by Splinter show that hundreds of Americans seized on the hotline to lodge secret accusations against acquaintances, neighbors, or even their own family members, often to advance petty personal grievances.

That story—about the government encouraging people to snitch on their neighbors (1984!)—caught my eye, because the consumer journalism site FairWarning also has a new piece up today, this one about a lawyer for agricultural interests who has made snitching to ICE a key part of his strategy.

“The attorneys find out when their clients are already gone. I don’t see how they can stop me from reporting a crime.”

In at least seven cases, writes reporter Ted Rohrlich, California lawyer Anthony Raimondo offered to help immigration authorities detain and deport undocumented farmworkers who accused his clients of mistreatment. “I never make threats,” Raimondo clarified in an email to one federal official. “I have always simply taken action…The attorneys find out when their clients are already gone. I don’t see how they can stop me from reporting a crime.”

Along with fighting for farmers accused of cheating employees, Raimondo has defended labor contractors against accusations that they are responsible for crash deaths of workers transported under unsafe conditions. In the process, Raimondo has won the hearts of grateful clients and championed the idea that California overregulates business.

Anja Raudenbaugh, chief executive of California’s Western United Dairymen, told FairWarning that many of her 800 members consider Raimondo “something of a hero.” The unions hate his guts, though. “Pretty much everyone considers him a slime bucket,” Rorhlich was told by one organizer who’d accompanied a worker to Raimondo’s office for an arbitration hearing only to be confronted by ICE agents who took the worker into custody.

One Ninth Circuit appeals judge compared Raimondo’s tactics to those of a serial killer.

California legislators may even have been inspired by Raimondo’s tactics when they amended a state law in 2013 to clarify that any lawyer who reports the other side’s clients to law enforcement for a retaliatory purpose can be disbarred. Not long after that, Judge Stephen Trott, part of a federal Ninth Circuit panel fielding the appeal of a retaliation lawsuit filed against Raimondo, went so far as to compare Raimondo’s tactics to those of a serial killer.

The Ninth Circuit panel ultimately decided that the lawsuit—brought by an undocumented worker named Jose Arias whom Raimondo had helped deport after Arias sued a dairy for allegedly failing to pay his wages—could proceed. Emails between Raimondo and his ICE contact demonstrated his MO in this case and others: Arias, he told his contact, “will be attending a deposition next week. If there is an interest in apprehending him, please let me know so that we can make the necessary arrangements.”

Raimondo appears to have discontinued his deportation efforts, but the retaliation case against him is ongoing. (No trial date has been set as yet.) The lawyer insists he wasn’t retaliating against anybody. He was simply trying to rein in what he considers misconduct by the California Rural Legal Association, a legal services nonprofit representing farmworkers, some of them undocumented, in labor disputes. Because the CRLA receives federal funding, Raimondo insists, it should be barred from representing noncitizen workers. Judge Trott wasn’t buying that line. It is “a mindboggling argument,” the judge said in court, “that this man was motivated by the ethics and the law.”

You can read about the whole sordid affair at FairWarning.