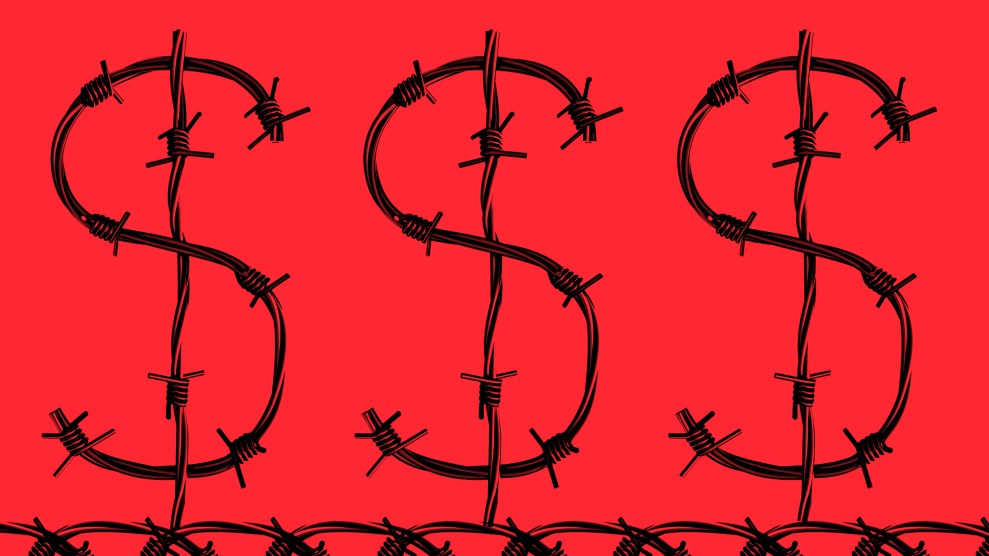 In October, when executives from the country’s biggest prison company held their annual leadership conference at a golf resort owned by President Donald Trump, they had much to celebrate: lucrative contracts, strong stock prices, and a good shot at expanding their reach in the year ahead, thanks largely to a broadening crackdown on undocumented immigrants and a need for more space to detain them.

It was a glaring reminder of how far the private prison industry has come since the final months of the Obama administration, when—shortly after the publication of Mother Jones’ award-winning investigation of a Louisiana private prison—the Justice Department pledged to phase out contracts with prison companies and the Department of Homeland Security, which oversees immigrant detention, suggested it might consider doing the same. Those days now seem far behind for America’s for-profit prison giants, which heartily backed Trump during the campaign, gave hundreds of thousands of dollars to his inaugural committee after the election, and are now set to benefit from his newly passed tax plan. “I do think we can do a lot of privatizations and private prisons,” Trump said in 2016. “It seems to work a lot better.”

When Trump got to Washington, the biggest prison companies were already making more money than ever from immigrant detention, and today their prospects have never looked rosier. Fueled by the administration’s deportation dragnet, Immigration and Customs Enforcement has predicted a surge in its daily population of detainees, from around 34,000 in July to more than 51,000 over the next year—and prison companies are more than happy to accommodate. In April, GEO Group executives won the administration’s first private immigration detention contract, for a facility in Conroe, Texas, that’s expected to bring in $44 million annually. This year the company also started operating an ICE detention center in Folkston, Georgia, that could boost its revenue another $21 million.

“I do think we can do a lot of privatizations and private prisons,” Trump said in 2016. “It seems to work a lot better.”

Another opportunity for growth might be farther north. Under Trump, immigration enforcement has shifted, with fewer migrants apprehended at the border and many more caught in raids throughout the country’s interior. That means ICE is hoping to incarcerate more of its detainees in the heartland, near where they’re arrested. “It’s good business sense to have bed capacity in close proximity to where our operations are,” says Philip Miller, deputy executive associate director for ICE Enforcement and Removal Operations.

The private prison industry is heeding the call. In October, ICE issued a request for information about potential locations for up to 3,000 new detention beds within 180 miles of Chicago, Detroit, Salt Lake City, and St. Paul, Minnesota. While ICE isn’t answering questions about who responded to its October inquiry (the National Immigrant Justice Center has a pending Freedom of Information Act request), it’s not hard to guess who’s in the running. Soon after ICE’s request went out, GEO Group chairman and CEO George Zoley told investors that his company was “very interested” in building the new detention centers the government was looking for. “GEO has such an appetite for these kinds of facilities,” Zoley said, “particularly with the contemplated length of the contracts—which we estimate to be approximately 10 years.” And Sheriff Michael Downey of Kankakee County, Illinois, whose department was the only public agency to respond to ICE’s Chicago-area request, says an ICE official told him that “all the major players” in the private prison industry had also expressed interest.

One of those players is CoreCivic—formerly known as the Corrections Corporation of America, or CCA—which in early December proposed a $100 million detention center in Elkhart, Indiana, across a county road from the local landfill and jail. The site, within 180 miles of Chicago and Detroit, would initially have 1,240 beds but could later be expanded to hold 1,400 people, making it one of the largest immigration detention centers in the country.

Local residents and immigrant rights activists are leading a campaign against CoreCivic’s proposal to build a $100 million detention center in Elkhart, Indiana.

CoreCivic’s construction proposal will go before Elkhart County commissioners early next year, and ICE is planning to ask for formal bids around Chicago in 2018. In the meantime, a coalition of local residents and immigrant rights activists are leading a campaign against CoreCivic, arguing that the detention center would drive out immigrant workers and exacerbate an already acute labor shortage in the booming manufacturing town. “I know people who are thinking about, if this happens, they’re packing up and leaving,” resident Rafael Correa told a local news crew.

But according to coalition organizer Richard Aguirre, most Elkhart officials and business leaders have so far been reluctant to criticize the proposal publicly, and it still has a solid chance of being approved next year. CoreCivic, Aguirre says, “thought they would get a warm reception here because this is a decisive county for Donald Trump.”

So is Uinta County, Wyoming, which went 72 percent for Trump in 2016 and where local officials in June passed resolutions unanimously supporting a bid by the Utah-based Management & Training Corporation to construct a for-profit immigration detention center near a local “road to nowhere.” Unlike Elkhart, Uinta—hurt by the loss of its oil and gas sector, and badly in need of the tax revenue and 150 or so jobs an MTC facility would bring—resembles the depressed regions historically targeted by private prison companies for development. (According to a Uinta County Herald report, the county clerk “thinks the proposed facility has the potential to be one of the best things to happen to the county in a very long time.”) MTC’s proposal hasn’t been finalized, but the company hopes to fill ICE’s need for detention capacity near Salt Lake City, a company spokesman confirmed last month.

Meanwhile, despite the drop-off in border apprehensions, detention centers in the Southwest are far from empty. Back in October, CoreCivic reported to investors that migration across the border had started to tick back up—and that more immigrants were slowly filling its detention centers. “If this trend continues,” CEO Damon Hininger said, “it is likely ICE will have additional detention capacities for interior enforcement…as well as in traditional Southwest border regions.” ICE is even seeking an additional 1,000 beds in Texas, where it already has capacity to detain more than 10,000 immigrants. Expanding the country’s immigration detention network to more than 51,000 beds will require $1.2 billion from Congress, though it’s unclear if that kind of money will be made available. The Senate’s budget bill would boost detention funds by 7 percent but would only cover about 39,000 beds, while the House’s bill would fund about 44,000. “My best guess is that ICE’s final funding for detention will be somewhere between those goalposts,” says Mary Small, a policy director for Detention Watch Network, an advocacy group that monitors immigrant detention. “But I also think it’s very important to say that in this Congress, who the hell knows?”