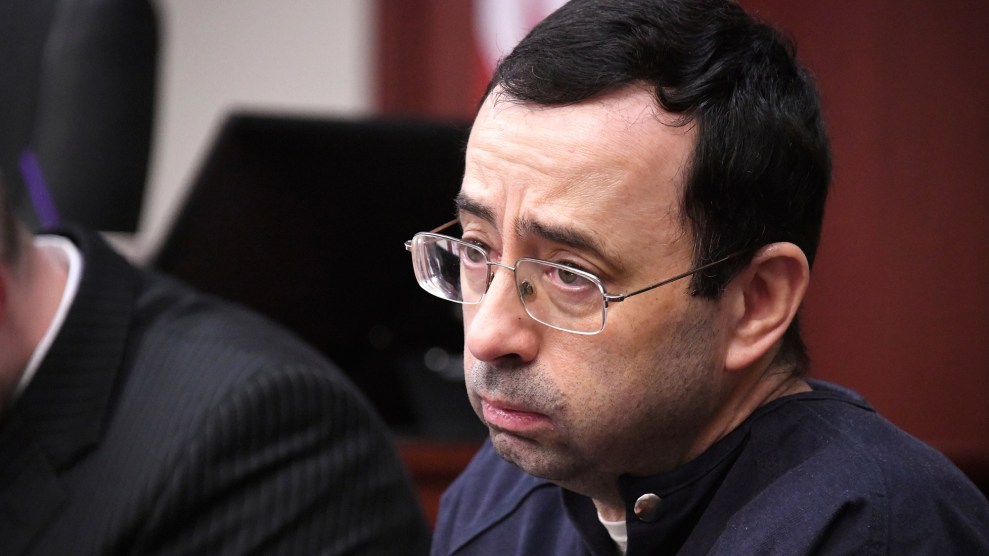 Update, January 29, 2:15 pm: On Saturday January 27, Michigan attorney general Bill Schuette announced his office will enlist an independent special prosecutor to investigate “systemic issues with sexual misconduct at Michigan State University.” “It is abundantly clear that a full and complete investigation of what happened at Michigan State University, from the president’s office down, is required,” Schuette told reporters. Also on Saturday, Michigan Lt. Gov Brian Calley called on the university to stop fighting civil lawsuits against it and instead start a compensation fund for Larry Nassar’s victims.

Over the past two weeks, as more than 150 women came forward to tell their stories of abuse at the hands of sports physician Larry Nassar, one of the biggest questions has been how his behavior was able to continue for decades. “There has to be a massive investigation as to why there was inaction and why there was silence,” circuit court judge Rosemarie Aquilina said in her final statement on Wednesday, just before sentencing him to between 40 and 175 years in prison.

Now the spotlight is shifting to the institutions that employed Nassar for decades: USA Gymnastics and Michigan State University. Many of the women who gave testimony at his sentencing hearing sharply criticized both USAG and MSU for failing to handle complaints against Nassar. Unsurprisingly, heads at both institutions have already started to roll. The entire USAG board will resign, the organization announced Friday—10 months after former USAG president Steve Penny stepped down and just a day after the US Olympic Committee’s chief executive Scott Blackmun threatened to remove USAG as the sport’s governing body if it failed to sufficiently clean house. These resignations won’t be enough, though; USOC has announced it will launch an independent investigation into USAG’s handling of the Nassar allegations, and on Friday, the House Energy and Commerce Committee said it will hold a hearing on the handling of sexual misconduct at USA Gymnastics, USA Swimming, and USA Taekwando, following calls this week from Sen. Jeanne Shaheen (D-N.H.) and others for a congressional investigation into the matter.

And that’s just at USAG. In Michigan, an entire state—and its educational and political infrastructure—is grappling with its biggest sexual abuse scandal in history, while one of the state’s most prestigious public universities, as well as its rising politicians, are getting wrapped up in who knew what and when.

Last week, the Detroit News revealed that 14 university officials were notified of Nassar’s actions at least once during the 20 years he worked at MSU.

Nassar first joined MSU in 1997 and was affiliated with the university until his firing in 2016. Last week, on the third day of his sentencing hearing, a report in the Detroit News revealed that 14 university officials, among them athletic trainers, assistant coaches, and then-MSU president Lou Anna Simon, were notified of Nassar’s actions at least once during the 20 years he worked at MSU. The Detroit News’ investigation also found that seven women had reported Nassar’s actions to MSU officials while he was still employed there, as early as 1997.

The university had multiple opportunities to take action against Nassar and failed, only firing him in September 2016 following an Indianapolis Star story chronicling one woman’s allegations.

In April 2014, an MSU graduate filed a complaint with the university, alleging that Nassar had sexually assaulted her during a medical exam. MSU police launched a criminal investigation based on the complaint, while the university undertook its own parallel Title IX inquiry and removed Nassar from his duties. The university ended up clearing Nassar of wrongdoing just a few months later, in July 2014, finding that the woman failed to understand a “nuanced difference” between a sexual assault and a medical procedure. At that point, he was allowed to start treating patients again.

The Lansing State Journal revealed on Friday that in the report about its Title IX findings, MSU concluded Nassar’s “conduct could open the university to lawsuits and expose patients to unnecessary trauma based on the possibility of perceived inappropriate sexual misconduct.” That report was shared with MSU’s general counsel’s office, Nassar, and Nassar’s former boss, William Strampel, the dean of the MSU College of Osteopathic Medicine. Afterward, with the university’s clearance, Strampel sent an email to Nassar to lay out an agreement for how he would treat patients, including that another person would need to be in the room whenever Nassar was scheduled “to perform procedures of anything close to a sensitive area.” Strampel later told police in March 2017 that he didn’t follow up with enforcing the guidelines.

The MSU police’s criminal investigation, meanwhile, continued for another 16 months after the conclusion of the university’s Title IX investigation. During that time period, Nassar continued to treat patients at the campus’ sports medicine clinic despite the criminal investigation, and, we now know, a lack of oversight from Strampel. Later, it was revealed that at least a dozen women and girls reported Nassar had sexually abused them during that time. Finally, in December 2015, MSU police requested that Nassar be charged with sexual assault. But the Ingham County prosecutor’s office declined to pursue charges, with one assistant prosecutor later saying that, at the time, he thought Nassar was performing legitimate procedures.

Now Strampel, who stepped down as dean in December for medical leave, is in the hot seat, with at least one MSU trustee calling on him to leave the university. But the responsibility does not end there, of course,  and the Nassar case looks like it might even become a flashpoint in Michigan’s upcoming governor’s race, as two candidates have played a part in what has transpired. One Democratic candidate, former lawmaker Gretchen Whitmer, worked as an interim prosecutor in the Ingham County office for six months in 2016—during the time when the office decided not to pursue charges against Nassar. In December, MSU police chief Jim Dunlap told the Detroit News that during a meeting in the fall of 2016, Whitmer hesitated to pursue sexual assault charges against Nassar and told Dunlap to instead pursue child pornography charges because the sexual assault charges could be “much more difficult to take to trial.” Whitmer denied Dunlap’s characterization as “patently false.”

And that’s where Republican candidate, state attorney general Bill Schuette, comes in; MSU police claims it brought the charges to Schuette and the US attorney’s office hours after that fall 2016 meeting. That ultimately led Schuette and US attorney’s office to charge Nassar. Schuette confirmed on Friday that his office is now undertaking an investigation into MSU. The probe, Schuette told reporters, will be a “full review” and will include “recommendations, including the possibility of criminal charges.”

State lawmakers, including Gov. Rick Snyder, have taken aim at Lou Anna Simon, who served as MSU president since 2003, for her role in the scandal; Simon resigned on Wednesday. And on Friday, Michigan State athletic director Mark Hollis also resigned—the same day that ESPN published an explosive report uncovering what it calls a pattern of “widespread denial, inaction and information suppression” of sexual assault complaints involving student-athletes, including members of the high-profile football and basketball programs, that were handled by MSU’s athletic officials instead of traditional university channels. Michigan’s House speaker Tom Leonard has called on the eight members of the MSU Board of Trustees to resign, while Michigan lawmakers are also now investigating MSU and seeking records related to its inquiries into Nassar’s behavior.

The scandal has also reached the national level: On Thursday, Education Secretary Betsy DeVos said in a statement that the department would launch an investigation and promised to “hold MSU accountable for any violations of federal law.” BuzzFeed News reported that the department would look into whether MSU has violated the Clery Act, which requires colleges and universities to track crimes. Unlike Title IX investigations, which result in reforms to university policy, MSU could face a steep fine if it is determined to have violated the Clery Act. For instance, in 2016, the Education Department fined Penn State University $2.4 million, the highest fine ever recorded for Clery Act violations, for failing to notify students and others after university officials learned of former assistant football coach Jerry Sandusky’s incidents of child abuse, among other reasons.

Topping it all off, the NCAA is also looking into MSU’s conduct. On Wednesday it launched an inquiry into potential rules violations regarding the university’s role in the case, citing a bylaw that covers MSU’s responsibility to protect the student-athletes’ well-being. “Larry Nassar’s heinous crimes of record against more than 150 victims raise serious concerns about institutional practices, student-athlete safety and the institution’s actions to protect individuals from his behavior,” the NCAA noted in its letter to MSU. It’s unclear what the results of this might be, but if the NCAA takes the same approach as it did against Penn State—12 vacated football wins, loss of scholarships, five years probation, a ban from the post-season for four years, and a $60 million fine—the ramifications could be far-reaching. (Most of those penalties were eventually rolled back.)

Beyond the many pending and potential investigations, Michigan State, along with USAG, Nassar, and others, face another issue: civil liability. Both institutions and Nassar already face state and federal lawsuits from some 140 victims, and, if successful through a settlement or ruling, the university or USAG could be on the hook for millions of dollars. (MSU has tried to dismiss the victims’ lawsuits, arguing that they retain “immunity from liability” for Nassar’s actions as a state institution. It remains to be seen if that claim will hold up.) One federal lawsuit, led by Rachel Denhollander, who was the first person to publicly speak of the abuse she faced from Nassar as a 15-year-old gymnast, and joined by 17 other victims, claims that USAG, MSU, and others “willfully refused to notify, give adequate warning, and implement appropriate safeguards” to protect the plaintiffs from Nassar’s misconduct. They’ve alleged that the organizations knew or should have known about Nassar’s actions and failed to adequately report them. The lawsuits aren’t seeking a specific amount in monetary damages, but legal experts tell Reuters that the testimony from the seven-day sentencing hearing heightens the pressure on USAG and MSU to settle the cases.

“The first step toward changing the culture that led to this atrocity is to hold enablers of abuse accountable,” Denhollander wrote in a New York Times op-ed Friday. “Predators rely on community protection to silence victims and keep them in power. Far too often, our commitment to our political party, our religious group, our sport, our college or a prominent member of our community causes us to choose to disbelieve or to turn away from the victim.”