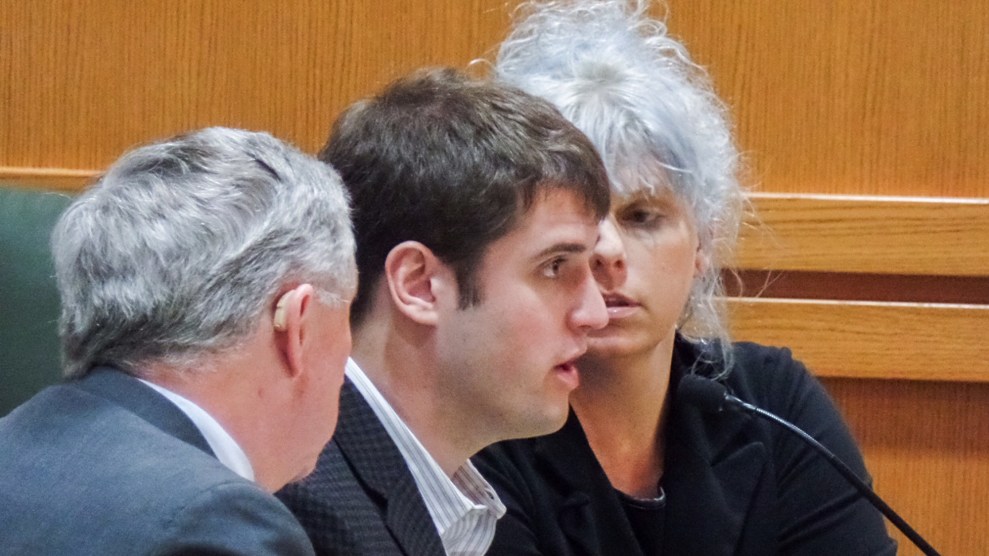 On Wednesday, the day before he turned 22, former University of Wisconsin-Madison student Alec Cook went before a judge in Dane County criminal court and put an end to a major case of campus serial rape, pleading guilty to sexually assaulting three female classmates, and suffocating or stalking two others.

He’s now facing a maximum potential sentence of nearly 40 years in prison and will have to register as a sex offender.

Cook has been the focus of national attention since October 2016, when a student he’d met days earlier accused him of violently raping her after they studied together one night. As word of his arrest spread on local news and social media, other students quickly came forward, reporting their own experiences with Cook to local law enforcement. In his apartment, Madison police officers discovered journals containing what they deemed to be an “index” of women he had met, reportedly including statements of sexual desire and descriptions of what he wanted to do with them.

Prosecutors ultimately filed 23 charges, ranging from sexual assault to stalking to disorderly conduct, based on 11 women’s stories. Cook’s lawyers had won a series of significant motions that split up the charges into seven trials, required them to be held outside of liberal Dane County, and banning the journals as evidence. But on Monday, one week before the first trial was set to begin, his attorneys announced they’d cut a deal.

According to the Wisconsin State Journal, Cook’s deal involved pleading guilty to suffocating a woman who told police he put his hand on her throat when she went to his apartment, and to stalking another woman to the point she considered transferring schools. He also admitted to committing three third-degree sexual assaults—defined in Wisconsin as sexual intercourse without consent—including the October 2016 encounter, as well incidents with two more women, one in 2015 and another in early 2016. (The Wisconsin criminal code doesn’t differentiate between sexual assault and rape.)

This conviction is actually quite remarkable. Part of the reason is that Cook is now an admitted serial campus rapist; as I reported last month, it’s matter of intense debate among researchers whether campus rape is primarily the result of serial rapists or one-time offenders. Cook is one of the first serial campus rapists whose name has been widely publicized. But perhaps even more important is that the case against him was charged at all. Neither repeated rape or one-time offenses is likely to be prosecuted:

Convictions in Cook’s case wouldn’t put an end to the empirical debates, but they would put a face to the shadowy “serial campus rapist” figure present in the scholarship for more than a decade. There aren’t many widely known examples, simply because it’s uncommon for any campus rape case, serial or not, to be prosecuted. Despite numerous studies finding that about 1 in 5 college women are affected by various kinds of sexual assault, including rape, only a fraction of cases are reported to authorities. Fewer still result in formal charges. Even considering rape cases in general, not just on campuses, only between 8 and 37 percent of reported incidents are ever prosecuted, according to one analysis.

Trials of serial campus rape cases are likewise rare; according to a search of news clips, only a handful have made it to court in recent years, and they’ve seen mixed outcomes. One case that did result in multiple convictions happened at the University of Minnesota, where Daniel Drill-Mellum pleaded guilty last summer to raping two women during college parties and was sentenced to 74 months in prison. Meanwhile, John Enochs of Indiana University was accused of two rapes in 2015 but accepted a plea deal the week before trial began last year. The charges in his case were reduced to “battery with moderate bodily injury,” a misdemeanor that carried no prison time. And earlier this year, former Kansas State University student Jared Gihring pleaded not guilty to raping two classmates. According to the Kansas Mercury, he was convicted on one charge for raping an unconscious woman at a fraternity house and sentenced to nearly 13 years in prison, but he was acquitted of the second charge, also involving an intoxicated woman.

The state Department of Corrections will now conduct a pre-sentencing investigation, Jessa Nicholson Goetz, one of Cook’s attorneys, told the State Journal. A sentencing hearing will be held in about three months and may take into account the dropped charges—including other additional allegations of sexual assault, stalking, and strangulation, as well as disorderly conduct and forced imprisonment.