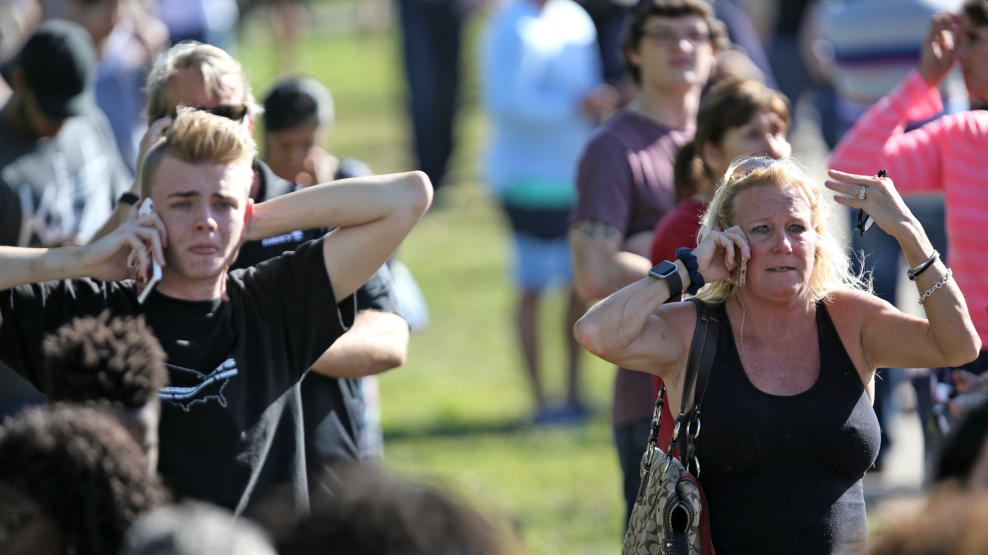 Waiting for word from students just south of the campus of Marjorie Stonemason Douglas High School in Coral Springs, Florida where a shooting occurred on Wednesday. Amy Beth Bennett/Sun-Sentinel/Zuma Wire

Carly Novell, a senior at the Florida high school where at 17 people were killed in a mass shooting Wednesday afternoon, survived by hiding in a closet with several of her classmates. It was an eerie parallel to a day almost 70 years earlier, when Novell’s grandfather, Charles Cohen, survived one of the nation’s earliest mass shootings by a lone gunman in 1949.

This is my grandpa. When he was 12 years old, he hid in a closet while his family was murdered during the first mass shooting in America. Almost 70 years later, I also hid in a closet from a murderer. These events shouldn't be repetitive. Something has to change. #douglasstrong pic.twitter.com/nDctTNlUNs

When Cohen was 12 years old, he hid from notorious mass murderer Howard Unruh in Camden, New Jersey, as his parents and grandmother were killed in their home. Novell spoke with HuffPost on Thursday about the ordeal.

“[My grandpa] never really talked about what happened and I didn’t find out until after he died,” she said. “But family was so incredibly important to him because of what happened. He wasn’t as lucky as me.”

Unruh ultimately killed 13 people that day, and experts say he was the first of many “lone wolf” shooters. Smithsonian dubbed the incident the country’s first mass murder. Cohen’s parents lived next door to the killer and were the main targets of Unruh’s rage, committing what he perceived as injustices against him, such as telling him to turn down his music. Cohen, the last survivor of the massacre, died in 2009.

During the shooting Wednesday, one of the deadliest school shootings in history, Novell hid in a closet in the school’s newspaper room with 18 other students. Novell told HuffPost she “really just didn’t think it was real.”

“I just wanted to stay safe and keep everyone safe. When I got out, I was just hoping to see my mom and hug her because I couldn’t even imagine how scared she was,” she said.

In an email, Novell’s mother, Merri Novell, told HuffPost that she, her late father, and her daughter shared the belief that “no one should own a gun except for law enforcement.”

Nikolas Cruz, 19, is in police custody for the shooting at Marjory Stoneman Douglas High School in Parkland, where he was previously a student.