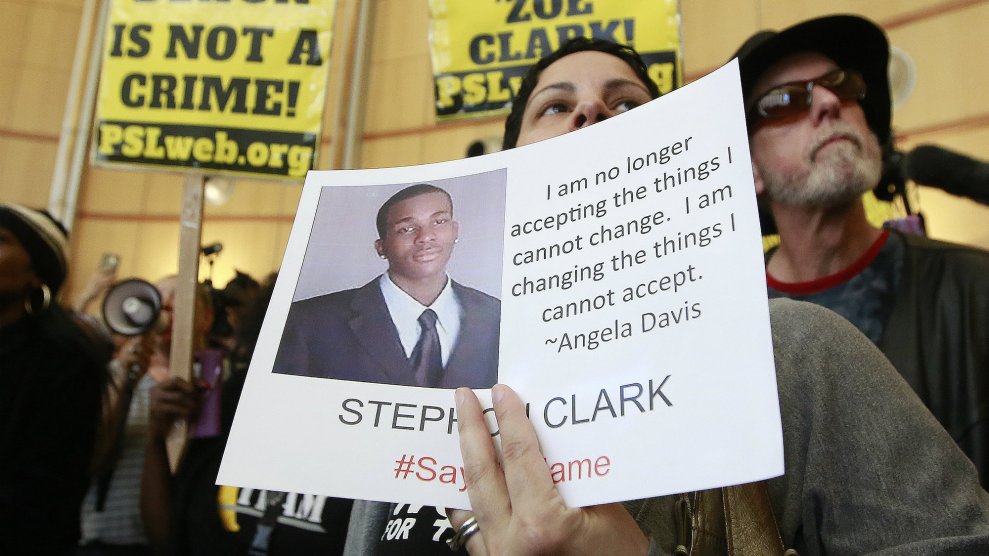 A woman protests the police shooting death of Stephon Clark in Sacramento on March 22.Rich Pedroncelli/AP

The California state Department of Justice will open an independent investigation into the fatal police shooting of 23-year-old Stephon Clark, California Attorney General Xavier Becerra and Sacramento’s police chief jointly announced on Tuesday. The decision was made at the request of the Sacramento Police Department, and comes amid growing national outrage over the killing of Clark, who was shot in his grandparent’s backyard after police apparently mistook his cell phone for a gun. Becerra’s office will also conduct a review of the Sacramento Police Department’s use of force policy.

California Department of Justice makes it official – it’s launching its own independent investigation into Stephon Clark’s shooting. The Attorney General said they were asked to by Chief Hahn pic.twitter.com/ndOJBhoYLE

Clark, a father of two, was shot on March 18, after two Sacramento police officers responded to a call about a man breaking into cars in a residential neighborhood. The Sacramento Police Department has since released videos of the shooting from two separate police body cameras. The videos show officers encountering Clark on the side of a house after airborne Sacramento County sheriff’s deputies identified Clark as the suspect. The house was later determined to be the home Clark shared with his grandparents and several siblings.

Clark is difficult to make out in the video, but an officer can be heard ordering Clark to show his hands, and then rushing to the back of the house, presumably in pursuit of Clark. The officer orders Clark to show his hands a second and third time in quick succession and then a flurry of bullets is heard after the officer says that Clark had a gun. Police officials have said that no gun was found at the scene, and that Clark was holding a cell phone when he was shot.

Sacramento Police Department Chief Daniel Hahn has said that the two officers fired 20 shots at Clark. It’s unclear how many times Clark was hit. One of Clark’s relatives has called the shooting “overkill.” The family has also raised questions about why the Sacremento PD initially released a statement about the shooting that many have interpreted as suggesting Clark was armed with a toolbar, and why police why officers chose to mute their body cameras toward the end of cameras’ recordings. They have also argued that officers did not give Clark enough time to comply with their directions before shooting. The Sacramento County District Attorney’s office is investigating to determine whether or not to file criminal charges against the officers involved.

Clark’s death prompted tense protests in Sacramento last week, and nationwide outrage on social media. Protesters blocked the entrance to a Sacramento King’s game last Thursday, preventing thousands of fans from being able to attend, and blocked a highway on Friday. Clark’s name was mentioned at multiple March for Our Lives rallies on Saturday, including at the rally in Washington, DC.

In an emotional press conference on Monday, Clark’s grandmother called for criminal charges against the officers involved in Clark’s death. The family’s lawyer—veteran civil rights attorney Ben Crump, who has also represented the families of other black victims of police and gun violence, including Trayvon Martin, Tamir Rice, and Michael Brown—said that the family intended to seek an independent autopsy. Crump has also previously stated that the family intends to sue.