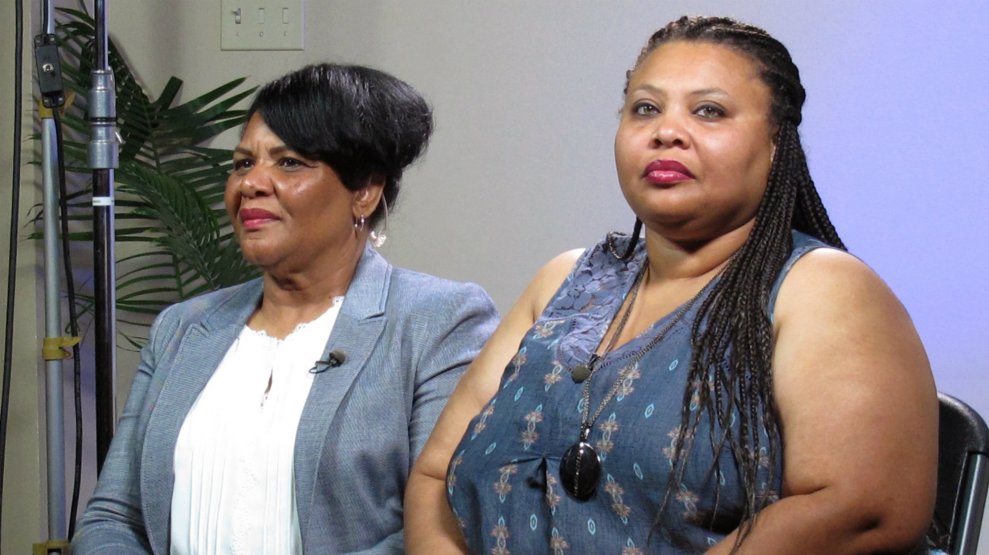 Last Wednesday, Alice Marie Johnson, a 63-year-old great-grandmother who served more than 20 years of a life sentence for a first-time, nonviolent drug offense, was released from federal prison in Alabama after President Donald Trump commuted her sentence at the request of Kim Kardashian West. The reality TV star, who got involved after seeing a news video about Johnson, had met with Trump at the White House to plead her case.

On Friday, Trump said he also plans to ask NFL players who have protested during the national anthem to suggest names of people they think he should pardon. It appeared to be the president’s first acknowledgment that players were protesting racism in the criminal justice system—in addition to police violence against African Americans—and not the national anthem itself, or the flag.

“It’s clear that this is a PR stunt…That said, even a PR stunt can get some of our people free.”

“It’s clear that this is a PR stunt,” says Malkia Cyril, executive director and co-founder of the Center for Media Justice, an Oakland-based group focused on the role of surveillance technology in incarcerating people of color. “That said, even a PR stunt can get some of our people free.”

“We have to make a decision,” she adds, “as to whether getting one or two, or three or four, or 10 people released from prison is worth boosting the reputation of a racist, misogynist, and dangerously authoritarian administration.”

“I get weary about what it signals to broader society that Trump and his cronies can say that they’re on the right side of history” while “not actually doing what they have the power to really do,” says organizer Mary Hooks, whose group Southerners on New Ground spearheads an annual, national campaign to bail black women out of jail ahead of Mother’s Day. Hooks, too, is wary of engaging with such a piecemeal effort: “So we’ve freed 20 people, but we still don’t have systemic change, and we don’t hold them to account to actually free the millions that are incarcerated.”

“I’m not so fundamentalist that I can’t see an opportunity.”

Cyril and Hooks echo what I heard from three other Black Lives Matter organizers about what Trump’s maneuvering means for their movement. All cautioned against the potential consequences of participating in the president’s pardon politics, yet they all celebrated Johnson’s release and said that, if asked, they would work with NFL players or other celebrities to draft a list of names for Trump to consider for pardons or sentence commutations. “I’m not so fundamentalist that I can’t see an opportunity,” Hooks says.

Cyril says she’ll offer names so long as the celebrities who asked her also committ to using their platforms to boost broader criminal justice reform. Charlene Carruthers, founding director of the national group Black Youth Project 100, stressed that she’d do so only if she could recommend political prisoners.

Trump ran for president using tough-on-crime rhetoric, and even as his son-in-law and senior advisor, Jared Kushner, has taken up criminal justice reform as a policy issue, the Trump administration has endorsed policies that could put more people behind bars.

Last May, for instance, Attorney General Jeff Sessions reversed an Obama-era guidance aimed at limiting federal prosecutors’ pursuit of charges that could trigger mandatory minimum sentences for first-time and nonviolent drug offenders—like Johnson. Instead, Sessions directed federal prosecutors to pursue the “most serious, readily provable” offense against defendants in nearly all cases. And though Trump has called vaguely for prison reform, it has not been clear that he will support broader federal sentencing reform legislation.

“I’d like to tell [Trump], please remember…the others who have been left behind.”

It is legislative reform—not individual pardons here and there—that organizers say will make a difference for the more than 2 million people behind bars nationwide. “The United States has 3 percent of the world’s population and 25 percent of the world’s incarcerated population,” notes Rashad Robinson, executive director of civil rights group Color of Change. “If the president wanted to deal with those things, he’s the president, and he’s got both houses of Congress.”

On Good Morning America last Thursday, Alice Johnson petitioned Trump to remember the millions of other people who remain locked up. “This moment right now is happening because President Trump had mercy on me,” Johnson said. “I’d like to tell him, please, please remember us, the others who have been left behind. Because there’s so many others like me who, too, need to have an opportunity, the opportunity that I’ve had.”

Carruthers sees Johnson’s release as an opportunity for community organizers to highlight crucial reforms, and to “say, ‘Hey, this is what else is possible and necessary in this particular moment.'”

Khan-Cullors agrees. “It’s important for people to get free,” she says, “but it’s even more important that we have policies that don’t lock us into only freeing a few people.”