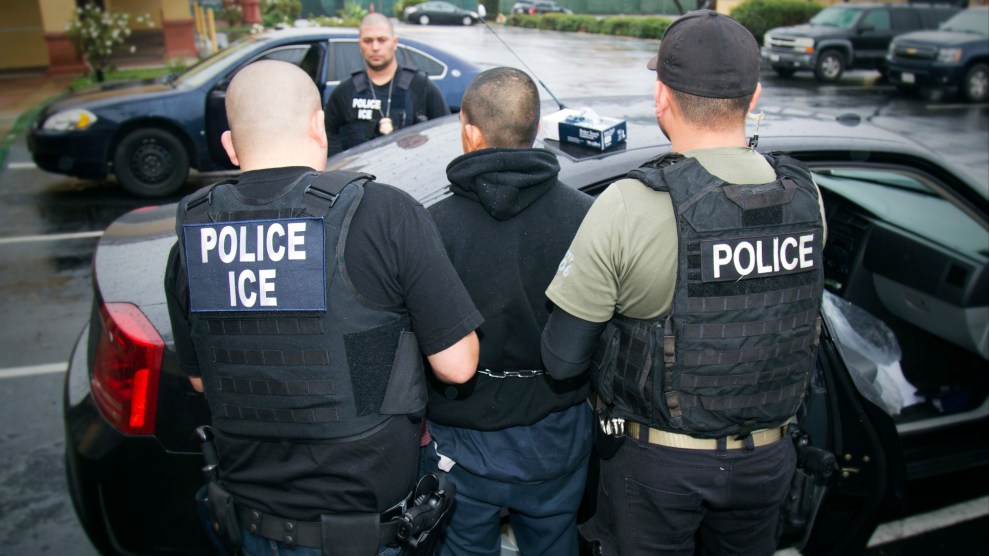 Less than a week after President Donald Trump took office in January 2017, he issued executive orders packed with plans to jumpstart an immigration crackdown, including hiring 10,000 new Immigration and Customs Enforcement officers and 5,000 new Border Patrol agents. But Trump’s so-called “deportation force” did not stop there. To the “maximum extent permitted by law,” one of the orders said, his administration would also expand a long-running and long-troubled program known as 287(g), which basically turns local cops into de facto immigration officers.

The program, named after a section of the Immigration and Nationality Act, lets ICE sign agreements with local sheriff’s departments empowering some of their deputies to act as “designated immigration officers” in local jails. Those deputies would then be allowed to interview people already locked up in the local jail, make immigration arrests, and initiate deportation proceedings against them.

Since Trump’s inauguration, the Department of Homeland Security has more than doubled its number of agreements, expanding the number of participating departments from 36 to 76 within 14 months, according to a new report from the DHS Office of the Inspector General. In some counties, sheriffs have paired 287(g) agreements with a federal contract to hold immigration detainees in their local jails—meaning ICE pays those departments to detain people arrested under the 287(g) program. But management and training did not keep pace with the growth of the program, according to investigators, and ICE remains unable to monitor how closely sheriffs are following the agency’s own standards and whether the local officers it has deputized are even fully trained to enforce immigration law.

To untangle the details of the 287(g) program and understand the implications of the inspector general’s report on how ICE is failing to monitor local departments participating in the program, I talked to Chris Rickerd, a Houston-based policy counsel working on immigration issues for the American Civil Liberties Union.

Chris Rickerd: The Obama administration used to have more agreements, close to 100, but whittled them down in part because of Department of Justice investigations into how certain jurisdictions were conducting their agreements. The most notorious [investigation] was into Joe Arpaio, [the former sheriff of Maricopa County, Arizona, who was sued by the DOJ for racially profiling Latinos]. By the end, the Obama administration said 287(g) wasn’t needed—in part because Secure Communities, the program that shares with DHS fingerprints of everyone who’s arrested and booked into jail, was rolled out in all these facilities.

Trump’s executive order went back on that and said, “We want to expand this.” They would like, at the extreme, to have every single law enforcement agent in the country, whether they’re federal, state, or local, involved in immigration enforcement. And I think they were running out in front of themselves, in terms of budget and oversight, to fulfill this executive order.

MJ: Local sheriffs have to apply for a 287(g) agreement. Why do some of them choose to do it?

CR: This is a politically driven expansion. This was not driven by immigration enforcement needs, neither on a national level nor on the individual locality level. [In] the jurisdictions that are being added, the sheriff wants to show he or she is tough on immigration and wants to be part of Trump’s deportation force. Or, if their jail is struggling financially, they may see this as a boon and a way out. Some of the new agreements also are twinned with detention contracts: They designate certain beds in the jail as detention beds, and [ICE] pays a daily rate for them. That creates the incentive structure to book people, because the sheriff knows their bottom line is helped by having as many people as they can put into those detention beds.

MJ: The new inspector general report says ICE is falling short on overseeing all these new partnerships, partially because it hasn’t hired enough “program managers.” What are program managers, and what has gone wrong?

CR: They are responsible for implementing what is called a memorandum of agreement—a very detailed, contractual-type document which requires training, reporting, and complaint mechanisms and lays out how the entire mechanism for how this is supposed to work. It’s not as if designated immigration officers are outside ICE. They are supposed to report, just like an ICE agent does, through a chain of command. And that’s what’s really breaking down. If you don’t have enough program managers, you can’t oversee the agreement or [know] if there are problems.

Field office directors are giving additional tasks to program managers that are crowding out their already heavy load. The Texas expansion, which I think was 16 new jurisdictions, ended up with one [program manager] overstretched in fulfilling these responsibilities. That has a bottom-line effect on people who are detained and deported, and, of course, their families.

MJ: The report says the problem is bigger than not having enough supervisors—it also has to do with how local officers are trained under the program. What are the issues there?

“We’ve had incidents in the past of US citizens being detained. We’ve had people with green cards, lawful status, being put into this system.”

CR: The certification process [for designated immigration officers] not only includes initial training, but refresher training and some online certifications that are very important in terms of immigration law, knowledge, and updates. Not only was it not tracked whether the officers were doing that online training, but those who weren’t recorded as having fulfilled the requirements weren’t terminated from the program, as they’re required to be under ICE rules. If that’s not happening then there are people who are doing 287(g) functions without proper credentialing. There isn’t the correct knowledge of immigration law and procedure that is necessary for each processing.

MJ: What does all this mean for the people in those communities where local law enforcement has signed a 287(g) agreement?

CR: On the most pressing level, mistakes will be made in greater numbers. We’ve had incidents in the past of US citizens being detained. We’ve had people with green cards, lawful status, being put into this system. If there’s not oversight, those mistakes will multiply.

In one respect, it’s important to look at those jurisdictions that have rejected agreements. Just recently, the new sheriff in Charlotte, North Carolina, said he would end the agreement. We’ve had Harris County, which is Houston, end the agreement right at the beginning of the Trump administration. Large urban communities realize the importance to public safety of having community trust. If people know the 287(g) agreement exists and that there’s entanglement between state and local police and immigration enforcement, they’ll be reluctant to come forward if they are victims or witnesses or survivors of crime.

MJ: ICE responded to the report by saying it was going to fix the training and management problems by next April. Will they be able to get it done?

CR: I don’t think it’s entirely in ICE’s hands to remedy some of this. They have said they asked for 40 more positions in the future budget. That hasn’t been approved by Congress yet. It’s hard to see how a pledge to put these reforms into effect is going to come to fruition without Congress either appropriating more or overseeing this better.

MJ: Bottom line: Does this all mean more people are going to continue to be brought into ICE custody and then, potentially, deported?

CR: I think that’s right. You’ve added these 100 or so designated immigration officers. They will increase the number of people put into the deportation pipeline. That isn’t some bureaucratic type of criticism of paperwork being late or something. These are the basic deportation and detention decisions that affect individuals’ lives.