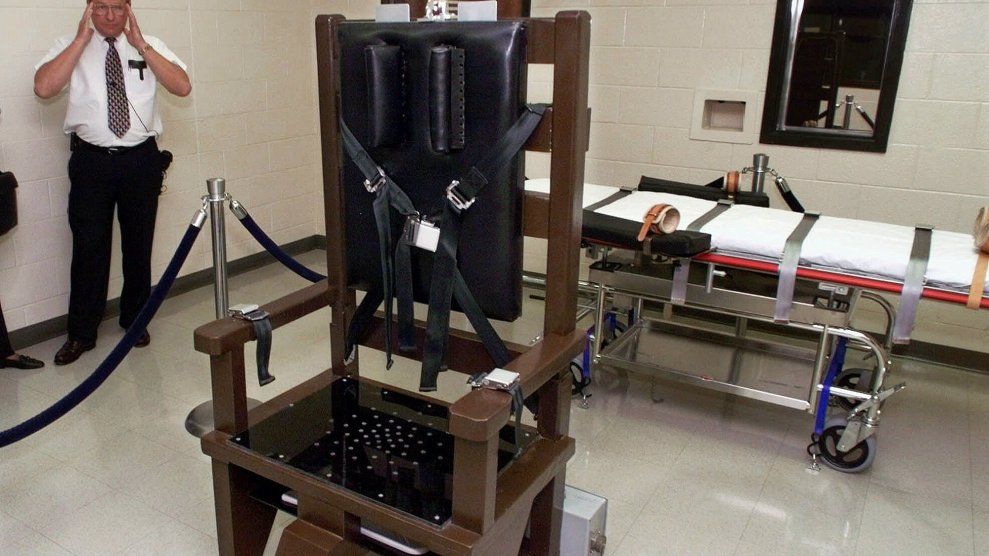 On Thursday, 63-year-old Tennessee death row inmate Edmund Zagorski will be put to death in the electric chair. The inmate has been on death row for more than 30 years for the 1983 murders of John Dale Dotson and Jimmy Porter in a drug deal gone wrong. Zagorski’s lawyers had been engaged in a lengthy legal battle over whether the controversial sedative Midazolam, which has been blamed for several botched executions, should be used. Finally, Zagorski requested the chair, forcing Tennessee to decide if it would end his life with a method that a majority of Americans find cruel and unusual.

After an Oklahoma doctor came up with the idea of fatal doses of pharmaceuticals as way to execute inmates in 1982, states increasingly opted for lethal injection as the least painful method of executing prisoners. But after a series of botched executions, including Clayton Lockett who twitched, gasped, and spoke before dying of a heart attack in 2014, several lawsuits challenged the use of the drugs. Doctors described their effects as being comparable to torture, and drug manufacturers increasingly refused to sell their products to prisons. As a result, states have been left to find other methods, or return to those that had fallen out of use. “The legitimacy of capital punishment has depended on the belief that we could find technology that will make it safe, reliable, and humane,” says Austin Sarat, professor of Jurisprudence and Political Science at Amherst Collage and the author of Gruesome Spectacles: Botched Executions and America’s Death Penalty.

“The legitimacy of capital punishment has depended on the belief that we could find technology that will make it safe, reliable, and humane.”

Because other states were struggling to find a supply of lethal injection drugs, the Tennessee Republican Gov. Bill Haslam signed a law in 2014 that would allow the state to use the electric chair if drugs weren’t available.

In 2017, Edmund Zagorski joined 32 other Tennessee death row inmates and sued the state over Midazolam, arguing that using the drug in lethal injection would cause the inmates to feel first as if they were being burned alive, and then as if they were drowning. Tennessee’s lethal injection protocol involves three drugs: Midazolam to sedate the inmate, a paralytic, and finally, potassium chloride to stop the heart. The inmates lost their case this year, and one of them, Billy Ray Irick, was executed by lethal injection in August. Witnesses said Irick, choked and coughed, and moved even after the consciousness check, which is typically done after the sedative is administered.
Zagorksi was scheduled to die on October 11, but the night of October 8, he requested the electric chair. Initially, the state refused, but Republican Gov. Bill Haslam relented and granted the inmate a temporary reprieve—in order to give the state time to prepare the chair for use. But as Nashville Scene reported, Zagorski’s lawyers filed a complaint in federal court calling both options barbaric:

“This suit is filed because the State of Tennessee has coerced Mr. Zagorski—with the threat of extreme chemical torture via a barbaric three-drug lethal injection protocol—to choose to die a painful and gruesome death in the electric chair. Such a death is clearly cruel and unusual, albeit to Mr. Zagorski less cruel than the threatened chemical torture.”

The electric chair has been in use since the 19th century, when it was created as a method of execution that was more humane than hanging. Alfred Southwick, a New York dentist, built the first electric chair in 1888. In 1890, William Kemmler, a man convicted of murdering his common-law wife was the first person to be executed in the chair in New York. States quickly adopted the approach, and throughout most of the 20th century it became the most prevalent method of execution in the United States.

When inmates are electrocuted to death, they are first shaved and then strapped to the chair. A metal skullcap electrode is attached to the scalp and another to the leg. The inmate is then given a jolt of between 500 and 2,000 volts for about 30 seconds. Prison staffers must wait for the body to cool down before checking to see if the inmate is still breathing. If he is, another jolt is given and the process is continued until the prisoner is dead.

When an electrocution is botched, the results can be gruesome. In 1983, it took 14 minutes for the state of Alabama to put John Evans to death. After the first jolt of electricity, flames erupted from the electrode in the inmates leg and smoke came out from the hood on Evans’ head. The doctors applied another jolt when they found he still had a heartbeat. Even though still more smoke poured out, and Evans’ lawyer asked them to stop, the doctors applied a third jolt of electricity. Thomas Arthur, an Alabama inmate who was executed by lethal injection last year, told Mother Jones that when the state used the electric chair, he could smell burning flesh within the confines on death row.

In 1990, Florida executed Jesse Tafero using electrocution for the murder of two law enforcement officials. During the procedure, Tafero’s head erupted into flames and prison staffers had to use three jolts of electricity to kill him. Later, parts of the case were overturned based on lack of evidence.

The US Supreme Court has never ruled the use of the electric chair as being unconstitutional. The high court initially planned to review its use in 1999, after a botched electrocution in Florida, but dropped the case after the state decided to switch to lethal injections. Many other states followed suit, eliminating electrocution in favor of lethal injections, under the assumption that it was more humane.

The last Tennessee inmate to be executed in the chair was Daryl Holton, who was put to death in 2007 for the murder of his four children; he too opted for the chair over lethal injection. His occurred the way the state had intended, but Fred Leuchter, who refurbished the chair the state will use in 1988, says they simply got lucky. He warns that the procedure could be botched. Leuchter’s career in the execution business was ruined when he claimed there were no gas chambers at Auschwitz. After his Holocaust-denying comments came to light, it was also discovered that he didn’t have an engineering license or degree, even though he claimed to be an engineer. Nonetheless, the chair he built is still being used today.

While Leuchter stands by his original creation, he says it has since been modified and those changes will lead to failure. “Tennessee’s got an electric chair that’s going to hurt someone or cause problems,” he told the Associated Press on Wednesday. “I don’t think it’s going to be humane.”