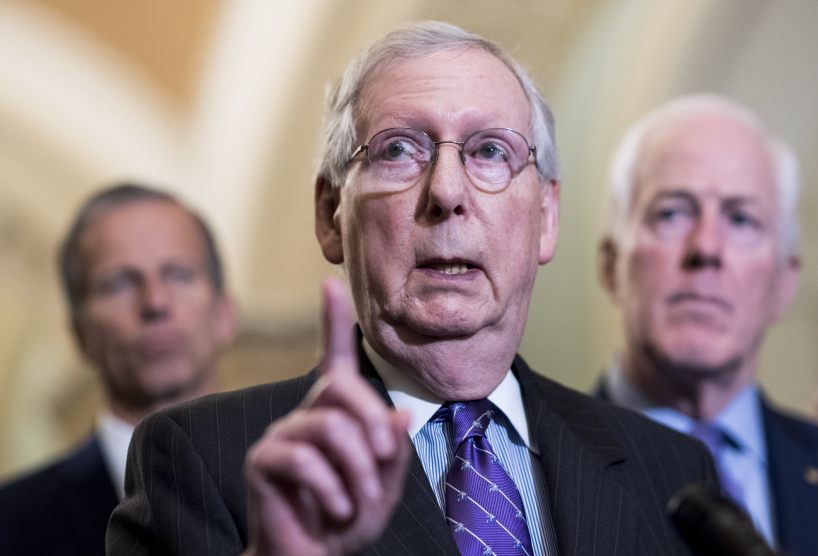 President Donald Trump supports it. So do most Republicans and Democrats in Congress. The First Step Act, which would reform federal prisons and sentencing policies, seems to have enough momentum to pass the Senate in the lame-duck session, in what would be an exceedingly rare bipartisan victory. The problem? Senate Majority Leader Mitch McConnell, who decides what bills make it to the floor, is dragging his feet on the measure, saying there might not be time to vote on it before the next Congress comes to Washington.

The First Step Act, co-sponsored by nearly a quarter of the Senate, would be the first major criminal justice bill to pass Congress in about eight years. In May, the House overwhelmingly approved a different version of the bill that only focused on prison reform; the legislation now under consideration by the upper chamber also includes sentencing reform, a concession that has brought more Democrats on board with the proposal.

This law could allow roughly 2,600 prisoners locked up for crack cocaine to petition for shorter punishments, a vast majority of them people of color.

Among its biggest impacts, the First Step Act would retroactively apply the Fair Sentencing Act of 2010, which reduced huge disparities between crack and powder cocaine sentences; this change could allow roughly 2,600 prisoners locked up for crack cocaine to petition for shorter punishments, a vast majority of them people of color. The bill would also curb some mandatory minimum sentences, including for certain violent crimes and drug charges. The federal three-strikes policy that currently triggers a life sentence would instead lead to a 25-year sentence, for example. And the bill would give federal judges more discretion not to hand down mandatory minimums to people with limited criminal histories, a provision that could help about 2,000 people annually, according to the Brennan Center for Justice, an advocacy group that supports the measure.

In federal prisons, the First Step Act would encourage more inmates to participate in job training programs, and it would allow some prisoners who participate in rehabilitative programs to spend more of their sentences in halfway houses or home confinement. It would also make more elderly and sick inmates eligible for compassionate release, and clarify that federal inmates can earn more time off their sentences each year for good behavior.

Still, the legislation is not a perfect fix, and backers on both sides of the aisle have made compromises. Some Democrats, for example, were disappointed that the new curbs on mandatory minimum sentences would not apply retroactively, while some Republicans were wary of sentencing reform at all. But supporters argue that, like its name implies, the measure is a first step that could pave the way for more reforms later. “It was a hard decision to endorse it, but in the end I think it’s progress,” says Kara Gotsch of the Sentencing Project, an advocacy group that withheld support until sentencing reforms were added recently. “This kind of perfect storm that’s happening right now, with the focus of the president, the focus of leadership of both sides of Congress and the press—this kind of momentum and interest is what makes legislation become law, and I can’t imagine we’ll be in a moment like this anytime soon.”

And yet McConnell seems unconvinced. The week after the midterm elections, the Senate majority leader told reporters he would be willing to move the legislation forward during the lame-duck session if at least 60 senators promised to back the measure. But despite the broad bipartisan support, he told Trump in a private meeting days later that lawmakers likely would not have time to vote on it this session because of other priorities like the farm bill, the federal budget, and judicial nominations. Democrats and Republicans alike are now pressuring him to move forward: Kentucky’s junior senator, Rand Paul, has argued that if McConnell doesn’t change his tune soon, he will be “single-handedly stopping criminal justice reform.” The American Civil Liberties Union is airing an ad across the state this week that blasts the majority leader for attempting to stop the bill from passing.

Rubio and Cotton are “important members of Mitch’s caucus, and he doesn’t want to alienate them.”

It’s not the first time McConnell has stalled criminal justice reform. During the final months of the Obama administration, the Kentucky Republican prevented senators from voting on another such bill. Supporters of the First Step Act say McConnell may be wary now of moving forward with a vote because of opposition from Sen. Tom Cotton (R-Ark.), who has lobbied aggressively against the bill, and Sen. Marco Rubio (R-Fla.), who said this week he has concerns about the sentencing reform provisions. McConnell “doesn’t like the prospect of splitting his caucus at all,” says Ames Grawert, an attorney at the Brennan Center for Justice. Rubio and Cotton are “important members of Mitch’s caucus, and he doesn’t want to alienate them.”

Cotton describes the First Step Act as a “jailbreak that would endanger communities” by allowing violent criminals to leave prison. Those fears aren’t based on reality, according to supporters of the bill. The number of prisoners who could see shorter sentences for crack cocaine (about 2,600) or who could be released right away for good behavior (about 4,000) is relatively small when you consider that more than 1,700 people are released from US prisons every single day, notes Keith Humphreys, a Stanford psychiatry professor who writes about criminal justice for the Washington Post: “The First Step Act would be equivalent to having about three or four extra days of prison release during the year that the law passes, with even smaller effects from then forward. And almost none of the inmates released early would have committed violent crimes.” “It’s nowhere near the jailbreak bill that opponents are making it out to be,” adds Grawert. “The real interest in the bill is that it addresses some of the most punitive drug sentences and over the long term helps reduces racial disparities in prisons.”

For now, all eyes are on McConnell—and Trump. McConnell “has wrongly made a calculation that this [bill] does not help Republicans win Senate seats, and therefore it’s not a priority for him, even if it’s a priority for the president,” says Gotsch. “Much of the ball is in the president’s court to force McConnell to do this and bring a vote.” During a roundtable discussion about the measure that Trump hosted on Monday, Sen. Lindsey Graham (R-S.C.) predicted it would get 80 votes in the Senate if the majority leader allowed it to move forward now.

“I don’t need leverage,” Trump added when asked by reporters how he would negotiate with McConnell. “Look, he’s a friend of mine. He’s a really good guy. And I—honestly, I think he believes in this also. And he wants to make sure—like I do, too—I want to make sure we have the votes. But we’re looking like we have the votes, as of right now, and maybe an abundance of votes.”