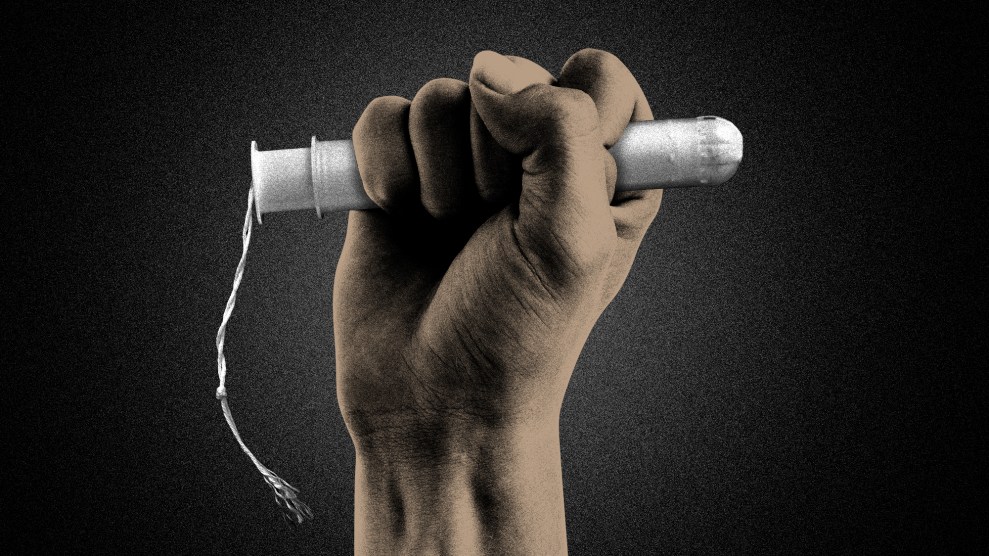 On the long list of worst places to deal with a period, jail hovers at the top. Christine Kolba found that out last February while detained for a drug charge in the San Mateo County jail, just south of San Francisco. The free pads from the facility didn’t stick properly to the papery underwear she’d been issued. And she didn’t have the $6.99 that the box of tampons would cost her at the commissary, the jail’s version of a corner store. When Kolba met her attorney, Paula Canny, one day to talk about her case, she broke into tears as menstrual blood ran down her leg. “I was horrified for her,” Canny says.

Canny, a no-nonsense defense attorney with about 40 years of experience, convinced the jail to give her client some free tampons. But the incident left her wondering whether other jails were also so stingy with their sanitary products. So she filed a public records request in almost every California county to find out. When the results came in, she cringed: Most jails in the state offered free pads but charged for tampons, often at prices far above market rate. And women could only buy them at the commissary once a week. If someone got her period on a Friday, she might have to wait until the next Thursday to make an order.

In California state prisons, which hold convicted criminals, inmates are guaranteed access to free pads and tampons. The same is true at federal prisons around the country. Why, Canny wondered, should the situation be different at local jails, which often hold people awaiting trial who are too poor to afford bail? Outraged by the discrepancy, the attorney sent letters to counties around the state last March and April, urging them to offer free tampons. Some agreed, but not all. “There were [about] 18 sheriffs that were basically like, ‘Fuck you—you can’t tell us what to do,'” Canny says. “I’m like, ‘Fuck you—I’m pretty sure I can.'”

In December, she filed a class-action lawsuit in Sacramento. Denying free tampons, she argued, not only violated the due process clause of the Constitution and California law but also caused “embarrassment, stress, shame” and “degradation.” “I want women to be provided the choice of which menstruation product to use,” she wrote last July to an attorney for Kings County who said the jail there would not offer free tampons. “Basic human decency and fundamental respect requires as much.”

The case could make a big difference in quality of life for women like Coral Martin, who went through a hellish experience when she got her period at the San Luis Obispo County jail in 2016. She quickly soaked through all the pads she’d been provided, and commissary tampons wouldn’t be available for days. When her mental state deteriorated—she’d been arrested during an episode of psychosis and the jail had denied access to some of her medications—she wound up in an isolation unit without any clothes or tampons, sitting in her own menstrual blood. “It was horrible,” Martin, now 23, recalls. “It just makes you feel like an animal.”

Women are the fastest-growing population in jails and prisons across the country, and the fight for better access to tampons has stretched across state lines. Last year, formerly incarcerated women in Arizona testified to the Legislature about the sad state of sanitary products in their prisons: Inmates had to wear multiple pads at once because the products were so bad, and they were allegedly punished when they bled on their uniforms. Some said they had to pay for extra pads unless they got a doctor’s note, but it cost $4 to schedule an appointment. “When I’m making 9 cents [an hour] after tax, you really got to think if I want to put my whole month’s income into hopefully being approved for extra pads, if they believe I deserve them,” Adrienne Kitcheyan, who had been incarcerated at Perryville prison, told lawmakers.

Chandra Bozelko, who spent more than six years at York Correctional Institution in Connecticut, says she was given 10 pads per month, enough for only one change per day during the average five-day menstrual cycle. “I have seen pads fly right out of an inmate’s pants: prison maxi pads don’t have wings and they have only average adhesive, so when a woman wears the same pad for several days because she can’t find a fresh one, that pad often fails to stick to her underwear and the pad falls out,” she wrote in the Guardian in 2015. Last year, a formerly incarcerated woman in Maryland told lawmakers she got toxic shock syndrome in prison after using toilet paper as a makeshift tampon; she ended up needing an emergency hysterectomy.

Women are the fastest-growing population in jails and prisons across the country.

Some change is in the works. In 2017, the Federal Bureau of Prisons issued a memo requiring wardens in federal facilities to provide free pads and tampons, a policy that Congress included in its First Step Act, which President Donald Trump signed in December. At the state level, last year Arizona’s corrections department agreed, following the testimony of formerly incarcerated women, to offer free tampons and boost the number of pads available to women each month. Maryland, Nebraska, Colorado, and New York have also improved access to sanitary products for inmates in recent years. In January, the American Bar Association urged all detention facilities to stop restricting women’s ability to get these products.

After Canny intervened in California, the San Mateo and San Luis Obispo jails started offering free tampons to women. But other counties continue to charge exorbitant prices. While some Tampax tampons sell for 19 cents each on Amazon.com, inmates at the Fresno County jail have to pay 56 cents for each Tampax Super tampon and 42 cents for each Playtex Gentle Glide Regular, according to Canny’s class-action lawsuit.

The lawsuit alleges that at the time of Canny’s public records requests, a few jails—including in Alameda, Marin, and Madera counties—didn’t offer tampons at all, not even in the commissary. Sergeant Ray Kelly, a spokesman for Alameda’s Santa Rita Jail, said the county recently changed that policy and now provides them for free. “If that’s what the female inmates needed and that’s what’s being advocated for, we saw no reason to object,” he says. “We’re not talking about a tremendous amount of money here.”

After I called Madera County’s jail last week to ask why it only provided pads, officials there looked into the issue and decided to change the facility’s policy. “Now they have the option of tampons,” Lieutenant Chris Rodriguez, a spokesman, called back to tell me. A Marin County spokesman said the county’s jail had long offered women access to tampons without charge.

Still, some counties argue they’re not legally required to do so, citing Title 15, a set of policies created by the California Board of State and Community Corrections to govern jails. It states that “each female inmate shall be issued sanitary napkins and/or tampons as needed,” a provision that Canny interprets to mean that each woman has a right to choose whichever product she prefers. Some sheriffs interpret it differently, arguing that it’s up to jails to decide whether to provide free pads or tampons, but that they are under no obligation to offer both. “We were following the letter of the law—obviously we were meeting the minimum jail requirement,” Kelly says of Alameda’s previous policy to only offer pads. Rodriguez of Madera County agreed: “‘[A]nd/or’—that’s what it clearly states,” he said of the policy. A Kings County attorney told Canny the jail had no plans to offer free tampons because it was not legally required to. (A jail spokesperson did not respond to a request for comment.)

“At best, the regulation is not clear,” says Aaron Maguire, general counsel at the board, which wrote California’s policy on sanitary products decades ago.

That’s not necessarily how the Board of State and Community Corrections sees things. “At best, the regulation is not clear,” says Aaron Maguire, general counsel at the board, which wrote the policy on sanitary products decades ago. He says none of the original writers are still on staff to clarify their intentions. But the board recently revised its policies for juvenile detention facilities: They now must offer tampons and pads for free at the request of detainees. Inspired by Canny’s lawsuit, the board plans to propose the same change for adult jails at a meeting in April. “The plan is to fix this poorly worded regulation,” Tracie Cone, a spokeswoman for the board, wrote in an email. If approved, these changes could go into effect as soon as October, and Canny says she would drop her lawsuit.

Until then, inmates are grateful that Canny has taken up the cause. “It’s a dignity thing,” says Martin, the former inmate in San Luis Obispo’s jail. “It’s just crazy that this is even an issue,” Canny says. “It’s 2018—not 1831.”