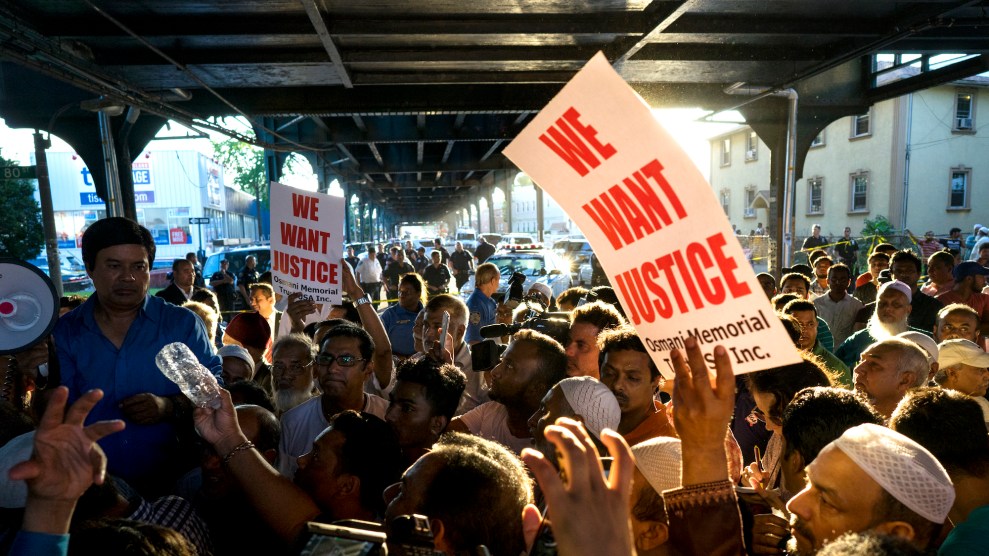 Mohammed Amanullah didn’t have to look up the number for the 106th Precinct in Queens. Looking out the window of his home on Glenmore Avenue, he realized he didn’t even need to call: A patrol car was already stationed outside Al Furqan Jame Masjid, an Ozone Park mosque.

It was March 15, and news had broken of a massacre at two mosques in New Zealand. Amanullah, the mosque’s general secretary, was worried about copycats.

The fear was hardly unwarranted. Nine days later, on March 24 in Escondido, California, an arsonist set fire to a mosque with seven worshippers inside. There were no injuries, but the authorities found graffiti left by the arsonist citing the deadly assault on the mosques in Christchurch, New Zealand.

As a result, the New York Police Department patrol car was back at the mosque in Ozone Park.

“We worry because we got the hate already,” Amanullah said in an interview this week.

Amanullah was referring to August 2016, when the imam at Al Furqan Jame Masjid, Alauddin Akonjee, was shot to death just blocks from the mosque. Another man walking with the imam was killed, as well. Amanullah had prayed with Akonjee the morning before the killing. Amanullah said he was eating lunch at home when his brother called with news of the murder.

“I said: ‘What are you talking about? You got the wrong news. I just got out of the mosque; I pray with him,’” Amanullah said. When he realized it was true, he said, “I sat down like a dead man.”

There are few mosques in America, then, where the fear of violence is more acute. And lasting. Last year, as part of our Documenting Hate project, we spent time at the Ozone Park mosque and with the widow of the slain imam. The gunman had been captured and convicted of the two murders, but there had been no formal hate crime charges, something that felt unjust to the imam’s wife, Minara, and her children. For Minara, there was no question about the gunman’s motive: Her husband had been targeted because of his faith.

“Why else would anyone attack my husband?” she said to us last year.

“If someone attacked like that on us, what would they do?” Halim asked about his older worshippers.

Mdabdul Halim, the current imam at the mosque, said the New Zealand massacre seemed to register most alarmingly with his older congregants. The accounts of the killings made clear that escaping the gunman’s onslaught was difficult. One woman was reported to have been killed while shielding her husband, who was in a wheelchair.

“If someone attacked like that on us, what would they do?” Halim asked about his older worshippers.

For those who pray at Al Furqan Jame Masjid, it can sometimes feel impossible to escape the specter of menace.

Shaheed Vazquez, a worshipper there, is a corrections officer. After the 2016 murder, Vazquez found himself working in a Brooklyn detention facility and charged with assisting in the guarding Oscar Morel, the imam’s killer.

“It was a little unnerving, but you have to treat everyone the same,” he said.

Vazquez said he was shaken anew by the massacre in New Zealand and the suspected arson in California.

Ozone Park is a wildly diverse and vibrant community of Muslims and Hispanics and African Americans. A statue of the Virgin Mary stands on a lawn across the street from the mosque. American flags fly from the windows and porches of many homes as Middle Eastern singing pulses through the neighborhood at prayer time. Signs stapled to telephone poles and ash trees advertise SAT tutoring in Arabic and English.

An officer at the 106th Precinct said that the police have been commanded to check on the mosque more regularly than usual. During Friday prayer, extra squad cars are dispatched to the mosque.

“We have a great relationship,” said the officer.

The worry about violence, though, can extend beyond the confines and congregants of the mosque. Sandra Peet, 45, who lives next to Al Furqan Jame Masjid, said she has come to fear that she might also be hurt if the mosque is attacked.

“You always have to worry,” said Peet, who said she works as a security guard for the Board of Education. “Always you expect the unexpected.”

An 82-year-old woman who flies a giant American flag on the side of her garden and who gave only her first name, Ann, said she has watched waves of Muslim immigrants move to Ozone Park. She said that she has no problems with her neighbors, but that she knows they can be targets of violence.

“They’re there to stay,” she said. “They’re not running away.”

Hate crimes against Muslims continue to plague New York. They can be individual acts, like the woman wearing a hijab who this year was assaulted or the other woman in a hijab who was spit on in New York City. Or they can be more sinister and sizable, like the arrest in January of three men and a high school student for their alleged role in a bomb plot in the upstate community of Islamberg. The defendants have pleaded not guilty.

“You do have people who tend to pick on the Muslims. You’re gonna have assholes who try to copycat the guy who gets off on the hate.”

In all, the New York Police Department reported 16 anti-Muslim hate crimes in 2018, down from 29 in 2016 but up from 14 in 2017. Last year, the New York chapter of the Council on American-Islamic Relations said there was a 74 percent increase in “anti-Muslim harassment, discrimination, and hate crimes” in New York state since the 2016 election. And a 2018 New York City Commission on Human Rights survey found that more than a quarter of Muslim Arab hijab-wearing respondents said they’d been intentionally pushed on a subway platform.

At Al Furqan Jame Masjid, the building is now surrounded by cameras, and in a window is a sign with a photo of a camera warning, “ALL ACTIVITIES ARE RECORDED VIDEO AND AUDIO TO AID IN THE PROSECUTION OF ANY CRIME COMMITTED AGAINST THIS FACILITY.”

However, Amanullah would like to see more cameras. He said that at the imam’s funeral, Mayor Bill de Blasio promised to fill the neighborhood with cameras. He is still waiting.

“He told us a lie,” he said bitterly. “We don’t have any security cameras.”

The mayor’s office did not immediately respond to a request for comment.

Mike Pecchillo, 32, who said he has lived in the neighborhood all his life, said the anxiety and anger are not hard to understand. He said he had watched the Facebook livestream of the New Zealand massacre and it made him reflect on Ozone Park.

“You do have people who tend to pick on the Muslims,” he said. “You’re gonna have assholes who try to copycat the guy who gets off on the hate.”