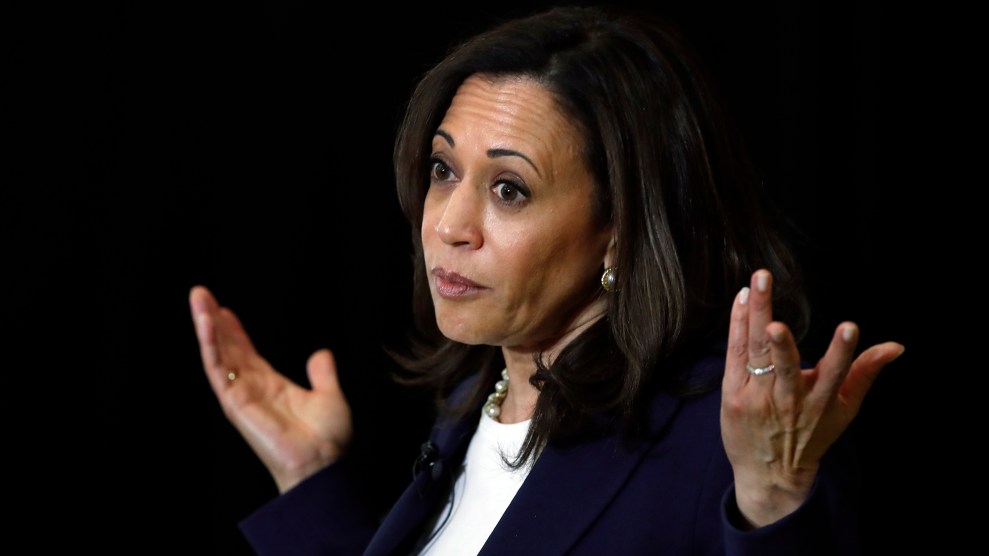 Sen. Kamala Harris during a town hall in Detroit on May 6Paul Sancya/AP

If Sen. Kamala Harris wins her bid to become the next president, she says she’d make fighting mass incarceration one of her key goals. “Too many black and brown Americans are locked up,” she said while announcing her presidential run in Oakland in January. “From mass incarceration to cash bail to policing, our criminal justice system needs drastic repair.” But critics are quick to bring up her history as a top prosecutor in California, a job that by design involved pushing to incarcerate people. It’s an image she’s fought to dispel, arguing that as a prosecutor she worked hard to make the criminal justice system more fair.

Last week, she unveiled an ambitious plan to help public defenders—a group she spent much of her legal career opposing in the courtroom. The proposed measure, a bill called the Equal Defense Act, would give them more money and time to work on their cases.

The policy is being heralded as a chance to address a major flaw in the criminal justice system that stacks the cards against public defenders and, by extension, people accused of crimes. Is the bill also a chance for Harris to shake her past image in order to appear more electable? “To me this seems very politically calculated,” says Lara Bazelon, a University of San Francisco law professor and former public defender who has been critical of the senator in the past.

Public defenders are tasked with representing criminal defendants who are too poor to afford their own lawyer. Their offices have long been perilously underpaid and overwhelmed. Across the country, many juggle insane workloads—an average of 1,375 misdemeanor cases or 418 felony cases per year, per attorney, in parts of California—leaving little time to prepare a solid defense. In 2013, Mother Jones reported that public defenders had an average of roughly 59 minutes to spend on each case in Atlanta, 32 minutes in Detroit, and just 7 minutes in New Orleans. Sometimes defendants without bail money are left languishing in jail, waiting for a lawyer to pick up their case; many plead guilty just to get out quicker.

Harris’ bill, introduced last Wednesday, would try to fix some of these problems, partly by giving public defenders more funds to do their job. The Justice Department already hands out grants to state and local governments for criminal justice reform, but not evenly: According to a 2012 study, less than 1 percent of these Byrne Justice Assistance grants went to public defenders, while about half went to prosecutors and law enforcement. Harris’ bill would attempt to level that playing field by creating a $250 million grant program for indigent defense attorneys. To receive this money, state or local agencies would have to set workload limits for public defenders and ensure within five years they earn as much as prosecutors do.

“Our public defenders are overworked and lack sufficient resources…And the thing that suffers is the integrity of our system of justice,” Harris said.

“After spending my career around the criminal justice system, I’ve seen up close how it can fail to ensure that poor defendants receive a fair trial and due process, as guaranteed to all of us in our Constitution,” Harris said in a statement. “All too often, our public defenders are overworked and lack sufficient resources…And the thing that suffers is the integrity of our system of justice, which is supposed to be based on fairness and equality.”

According to a study by the National Association for Law Placement, the average salary for a young public defender is only about $47,500, which can make it difficult to pay off the $100,000 or more in debt many bring with them out of law school. This can push even the most passionate public defenders into opting for better-paying gigs at law firms. “You can’t have a revolving door of young people who come out of law school, do it for a year, and then quit,” says Jon Rapping, who leads a group called Gideon’s Promise that trains public defenders. “And that’s happening.” Harris’ bill would make it easier for them to repay their loans by tripling funding for an existing loan repayment program.

Harris isn’t the first member of Congress to propose a fix for public defenders. In 2013 and 2017, Florida Rep. Ted Deutch introduced a bill that also sought to improve access to attorneys for poor clients, but it failed to get traction. It’s possible Harris will face better odds, riding on the momentum of the First Step Act, which last year became the first major criminal justice reform bill to pass Congress in a generation, and one that received broad bipartisan support.

Harris has long cast herself as progressive on criminal justice reform. “When activists came marching and banging on the doors, I wanted to be on the other side to let them in,” she wrote of her time as a prosecutor in her book The Truths We Hold, which came out in January. As San Francisco’s district attorney from 2004 to 2011, she helped develop a program called Back on Track that gave first-time nonviolent offenders an alternative to prison, an effort that, as my colleague Jamilah King has reported, successfully reduced recidivism. In Congress, she introduced a bill in 2017 that encouraged states to look for alternatives to cash bail, which often leaves jails filled with people too poor to pay. “Our justice system was designed with a promise: to treat all people equally,” she said in a statement accompanying that bill.

But there are less flattering elements of her prosecutorial past: As district attorney, Harris actually pushed for higher bail amounts for gun-related charges. Her office also prosecuted the parents of kids who missed too many days of school. This policy disproportionately affected low-income people of color, according to an investigation by the Huffington Post, and Harris later pushed to expand it into a state law that would punish parents of truant kids with $2,000 in fines or a year in jail. She now says she was trying to help them access services and regrets the policy led to anyone’s incarceration.

Later, as California’s attorney general, Harris argued the state had a right to impose the death penalty after a federal judge ruled it was unconstitutional, though she says she’s personally against capital punishment. She also declined to support a bill that would have required her office to investigate fatal police-involved shootings, and she fought to keep wrongfully convicted men in prison, despite evidence of prosecutorial misconduct in some of their cases. And until 2018, she said she was against the legalization of recreational marijuana, even though its criminalization has led to the disproportionate arrest and incarceration of people of color.

“If Kamala Harris wants people who care about dismantling mass incarceration and correcting miscarriages of justice to vote for her, she needs to radically break with her past.”

“Time after time, when progressives urged her to embrace criminal justice reforms as a district attorney and then the state’s attorney general, Ms. Harris opposed them or stayed silent,” Bazelon, the San Francisco law professor, wrote in a scathing op-ed in the New York Times. “[I]f Kamala Harris wants people who care about dismantling mass incarceration and correcting miscarriages of justice to vote for her, she needs to radically break with her past.”

In some ways, she seems to be trying to do just that. Harris’ public defender bill quickly earned applause from a host of criminal justice reform groups. “Fundamentally it’s one of the broadest attempts at the federal level to balance the playing field in terms of ensuring the Sixth Amendment,” which guarantees the right to an attorney, says Don Saunders, who works on indigent defense at the National Legal Aid & Defender Association. “It takes a hard look at some of the real challenges for the public defense community.”

“Unfortunately politicians have not cared much about public defenders, and I think it’s largely because they don’t care much about the people public defenders represent,” says Rapping. “I hope this bill forces some to look in the mirror, to check their consciences. My hope is this bill is a wake-up call.”

Even Bazelon, who has been so critical of the senator, is pleased with the proposal. Bazelon worked as a federal public defender in the early 2000s and recalls the harsh conditions at the time: “You were despised by judges, by prosecutors, by probation officers. Public defenders were sort of barely tolerated, and really at every turn disrespected to the maximum degree possible, so it’s really great to see there’s a recognition now that we perform this essential role, that we hold prosecutors accountable, that we defend people, and that we deserve money.”

“It’s a huge seismic shift in our culture that this is even being proposed,” she says. “Never mind that it’s a smart political tactic for someone who wants to be the Democratic nominee.”