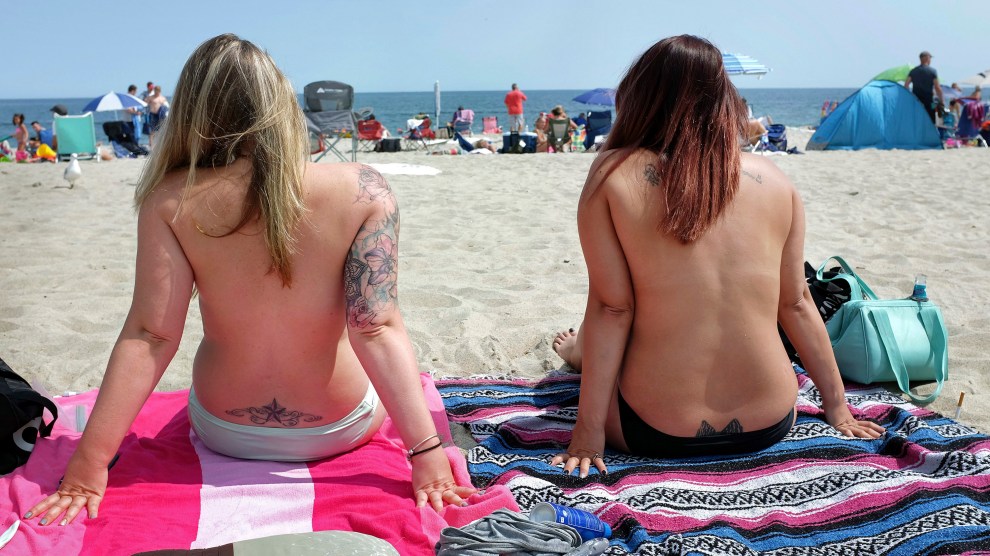 A West Valley, Utah, woman is reportedly facing criminal charges for being shirtless in her own home. Prosecutors allege her actions violate the state’s lewdness law; her lawyer argues the law unconstitutionally discriminates against women who are punished for going topless while men are not.

Tilli Buchanan and her husband were installing insulation in their garage when they shed their itchy clothing and stripped down to their underwear, the Salt Lake Tribune reported. When Buchanan’s stepchildren came into the garage and saw her topless, she said that they shouldn’t be embarrassed, because her husband—the children’s father—wasn’t wearing a shirt either.

The timing of the incident is unclear. Buchanan says it happened in fall 2016, but prosecutors say it was in November 2017 or January 2018.

The children’s mother, who was not present during the incident, reported it to authorities after the Division of Child and Family Services began an investigation about the children that was unrelated to Buchanan. As Jessica Miller writes for the Salt Lake Tribune:

West Valley City Deputy Attorney Corey Sherwin offers a different account in court papers: He alleges that Buchanan stripped down in front of her stepchildren after making a statement about how if her husband could take off his shirt, then a woman should be able to as well.

He further alleges that Buchanan, while “under the influence of alcohol,” had told her husband that she would only put her shirt back on if he showed her his penis.

The police became involved in the situation after the Division of Child and Family Services began an investigation involving the children that was unrelated to Buchanan. Though it was not the focus of the initial investigation, Sherwin wrote, the children’s mother reported it to authorities because she was “alarmed” about what had happened in front of her kids.

Buchanan, the stepmother, said she hadn’t thought about the incident much since it had happened — until a police detective called her earlier this year and asked about it. Then, weeks later, the charges were filed.

Even though Buchanan was topless in the privacy of her own home, she is now facing potentially very serious consequences: three counts of lewdness involving a child, a class A misdemeanor which could land her in jail and place her on the sex offender registry for 10 years. Utah’s ordinance about lewdness involving a child prohibits the exposure of “the female breast below the top of the areola,” either in public or “in a private place under circumstances the person should know will likely cause affront or alarm or with the intent to arouse or gratify the sexual desire of the actor or the child.”

“Because Tilli Buchanan is a woman—and only because she is a woman—the state now seeks to condemn her as a child sex offender for engaging in the exact same non-sexual conduct as her lawfully faultless husband,” Buchanan’s attorney, Randy Richards, wrote in a motion to find the lewdness law unconstitutional, according to the Salt Lake Tribune. “Tilli Buchanan is being singled out for prosecution solely on the basis of sex.”

A 2019 Fort Collins, Colorado, ruling in the 10th US Circuit Court, which includes Utah, allows women to  bare their breasts in public. West Valley prosecutors say the court’s ruling does not override Utah’s state ordinance.

Buchanan is expected to appear in court on November 19.